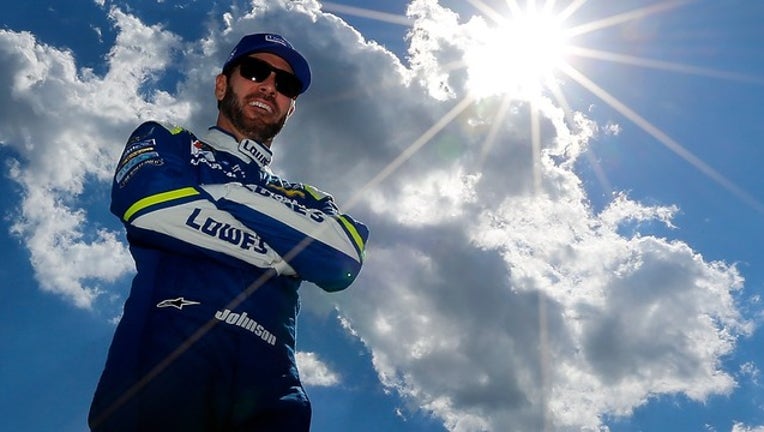 DAYTONA BEACH, Fla. (AP) - Jimmie Johnson's youngest daughter prays every night for Daddy to win a race. When Johnson scuffled through the worst season of his career, he felt the strain of not reaching victory lane.

"It was putting some pressure on me," Johnson said.

He didn't feel the same about critical comments saying Johnson was past his prime. The 43-year-old Johnson tweeted "I'm far from done" in the offseason, and with a risky move in the rain, he showed there's plenty left.

Johnson triggered a wreck that wiped out nearly the entire 20-car field at Daytona and zipped to the lead to win the rain-shortened exhibition Clash on Sunday.

The seven-time Cup Series champion failed to win a race for the first time in his career in 2018, but a dose of aggression put him back in victory lane during the opening weekend of Speedweeks. Johnson's win capped a banner day for Hendrick Motorsports: teammates William Byron and Alex Bowman locked in the front row for the Daytona 500 earlier in the day in qualifying.

"It's been a pretty awesome day," Hendrick said. "I hate we had the wreck there at the end, but it's been a really good day for the team."

The celebration at Daytona comes with a caveat: the last Daytona 500 pole-sitter to win the race was Dale Jarrett in 2000, and Johnson's victory doesn't count in the official NASCAR record book.

Paul Menard led 51 laps and controlled the race interrupted three times for rain. With more rain looming, Johnson dipped low and tried to side-draft Menard as they battled for the lead. But Johnson turned Menard and started a chain-reaction accident that left cars sideways and smoking behind the No. 48 Chevrolet.

"I looked in the mirror and there were a lot of cars caught up in it," Johnson said.

The rain that ended the race hit not long after the decisive move and Johnson won for the first time with new crew chief Kevin Meendering and new primary sponsor Ally.

"I inherited a great core group of guys with the 48 team," Meendering said. "There's a strong foundation there, and the team really works well together, and it jells together It's made that transition a lot easier."

Johnson and longtime crew chief Chad Knaus split at the end of last season after seven championships. Knaus beat Johnson in the race to the first race day bash - by just a few hours. But the race to victory lane in a race that really counts comes in the regular season, and Johnson hasn't won a Cup race since June 4, 2017 at Dover.

"We still need a points race win to say we're back in victory lane," Johnson said. "But it was a great first step today."

The wreck came 55 laps into the 75-lap event, and the race was called just four laps later. Kurt Busch was second, followed by Joey Logano, Ryan Blaney and Bowman.

Busch said team owner Chip Ganassi complained to NASCAR about Johnson driving below the double-yellow line to make the move. But Johnson was not penalized because the wreck forced him that low.

"I think Johnson had a legitimate run to go for the lead," Busch said.

Menard was positioned to win for Wood Brothers Racing only weeks after the death of team founder Glen Wood. Wood was 93 and had been the oldest living member of the NASCAR Hall of Fame when he died last month after a long illness.

"I felt like it was aggressive side-drafting," Menard said. "I got turned to the inside and hooked to the right and all hell broke loose."

Johnson had been caught up in many crashes in the Clash, failing to finish on the lead lap in each of the seven exhibition races. He was down at least 25 laps in five straight Clashes, and understands just how quickly a race at Daytona can change.

"I have a split-second decision to try to win a race, and I set up the pass and got position on him clean, "Johnson said. " I don't know what triggered his car wobbling and then the accident started from there."

Johnson had already proved at Daytona he was good on the long run - and with the 48 in the garage. He competed in the 40 to 44 age division early Sunday in the Daytona Beach half marathon and finished with a time of 1 hour, 34 minutes, 18.4 seconds.