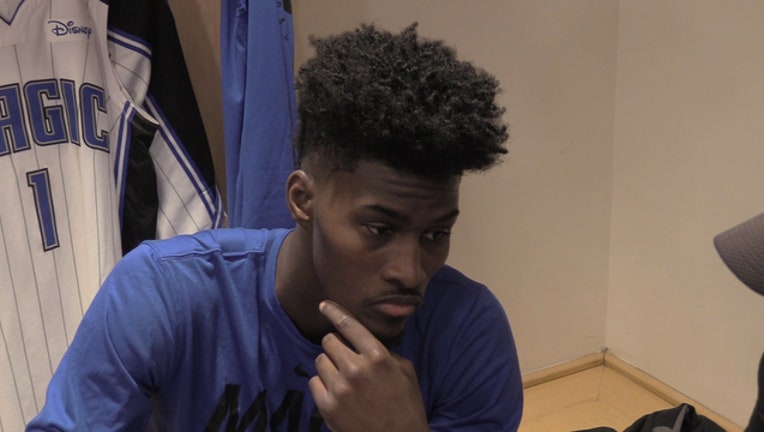 WASHINGTON (AP) - Orlando forward Jonathan Isaac collided with the Washington Wizards' Bradley Beal in the early minutes of Wednesday's game. Isaac left the floor on a stretcher, and was quickly ruled out of the game with a hyperextended left knee.
Yet, even with one of their key players out, the Magic, who entered with the NBA's worst offense, overcame Isaac's absence and rolled to a 122-101 win over the Wizards.
D.J. Augustin scored a season-high 25 points and Nicola Vucevic added 20 points and 12 rebounds. as Orlando snapped a four-game road losing streak.
After the game, Isaac felt he'd avoided a serious injury. He will have an MRI on the knee on Thursday and be re-evaluated.
"I've never hurt my knee before," Isaac said. "So as soon as it happened, I just naturally start thinking the worst. 'Wow man, it's over.' But as I was down there, it started to feel better and better just being down there. So I kind of felt, just the reassurance that I was going to be (OK)."
The Magic took the lead midway through the second quarter and led 62-58 at halftime. Orlando steadily increased its lead in the second half.
"I thought we played a good first half, and that second half was about as well as we've played," coach Steve Clifford said. "Good offense, good defense, and D.J. was phenomenal."
Evan Fournier had 18 points for Orlando. Markelle Fultz scored 16 and Terrence Ross 15.
Clifford was relieved after watching the collision, which occurred near the Magic bench.
It's scary because, to be honest, I think we got lucky," Clifford said. "I was right there, and the way it twisted, I thought I heard a pop and usually that's bad."
Beal, who returned from a two-game absence due to soreness in his right leg, had 27 points to lead Washington.
The Magic have beaten the Wizards in each of their three meetings this season.
"We were a step slow," Washington coach Scott Brooks said. "We didn't fly around and create energy and offense with our activity tonight. We seemed to be a step behind on every play."
TIP-INS
Magic: Clifford said the passing of longtime NBA commissioner David Stern was enormous. "Just a brilliant man. And they say a sign of leadership is not just that you have a definitive vision, but that other people will follow your lead. And certainly, that's what he did." Clifford said. ... F Aaron Gordon was out for the second straight game with a sore left Achilles.
Wizards: Brooks mourned Stern's death. "We lost a legend, an icon, somebody I had a great deal of respect for when I played and also when I became a coach. Impacted the game in incredible ways and we wouldn't be in our position as a league if it wasn't for his guidance for the many, many great years the league had."
FULTZ'S ASSIST
Midway through the third quarter, Fultz threw a spinning, behind-the-back pass to Fournier for a dunk, and he was pleased with it.
"I think that's stuff I used to do on the playground with my friends," Fultz said. "A lot of my close friends have seen me do stuff like that, but as far in the NBA, that's probably one of my top passes."
BEAL'S BACK:
Beal played 30 minutes after missing the last two games, and said he wasn't sure if he'd sit out one of this weekend's back-to-back home games. Prior to the injury, Beal played 194 consecutive games.
"When I came in to the league, my first couple of years, everbody was always saying I couldn't stay on the floor, and I was injury-prone" Beal said. "That was something I wanted to get off of my resume, I guess. I didn't want that title. I didn't want that name."
UP NEXT:
Magic: Host Miami Heat in the first of a four-game homestand on Friday.
Wizards: Host Portland Trail Blazers in the fourth of a six-game homestand on Friday.