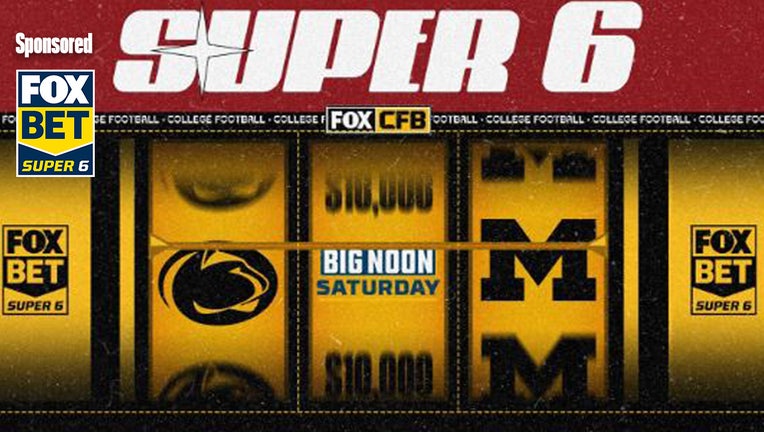 The FOX Bet Super 6 Big Noon Saturday jackpot is $10,000! Find out how the Penn State-Michigan matchup can help you win big bucks!

Pardon us while we belabor the point but this weekend's matchup between Penn State and Michigan on FOX is a BIG deal.

It's so huge, in fact, that we've dedicated our entire Big Noon Saturday $10,000 contest to this showdown.

That's right. You can win big bucks by watching this game and just playing along.

The Big Noon Saturday challenge is a free-to-play contest in the FOX Bet Super 6 app where players pick six different outcomes from one marquee matchup. From the team with the longest play to the total points scored in the game, predict all six perfectly, and you could be on your way to a big payout.

All you have to do is download the app and get your picks in before Penn State-Michigan kicks off this Saturday. It's that easy, it's free, it's fun, and it's a chance at winning ten thousand big ones.

In case you haven't figured it out, BIG is our theme this weekend.

And because this is such a gigantic Saturday, FOX Bet has a special offer just for this game. So check back so that you can cash in on that, too.

But before you make your picks, we're giving you a little help to get you started.

How many total points will be scored in the game?

When these Big Ten rivals faced each other last season, the final score was Michigan over Penn State, 21-17. That game ended with a point total of 38.

So we're taking the average of 47 and 58 to pick the total points scored. Ride with me here.

Which team will have the most solo tackles, and how many will they have?

This one was easy. Michigan at home should be electric on defense. Look for them to rack up the stats on the defensive side of the football.

Which team will have the longest punt, and how long will it be?

Which team will have the longest play, and how long will that play be?

Imagine Blake Corum running almost the length of the field and into the end zone for 6 or the Wolverines' special teams returning a punt for a TD. Expect big plays with a chance at the College Football Playoff still in play for both teams.

Which team will have the longest field goal, and how long will it be?

Kickers get a bad rap. Sure, they only have one job, but it's stressful. However, we trust the Penn State kicker to deliver a winner here.

Which team will win, and by how many points?

At FOX Bet, Michigan is favored by 7 points.

When the Wolverines are 6- to 8-point favorites under coach Jim Harbaugh, they've gone 4-2 straight up (SU) and 3-2-1 against the spread (ATS). Penn State, on the other hand, is 3-5 SU and 2-6 ATS against Michigan under coach James Franklin.

There it is, folks. You have our picks for six outcomes of our Big Noon Saturday marquee matchup between the Nittany Lions and the Wolverines.

Now, it's your turn!

After you download the app and submit your selections for the upcoming contest, share your picks with us by tagging @FOXSuper6 and @EricaReneeD and use the #EricaSuper6 across all social media platforms.

Let's get this cash!