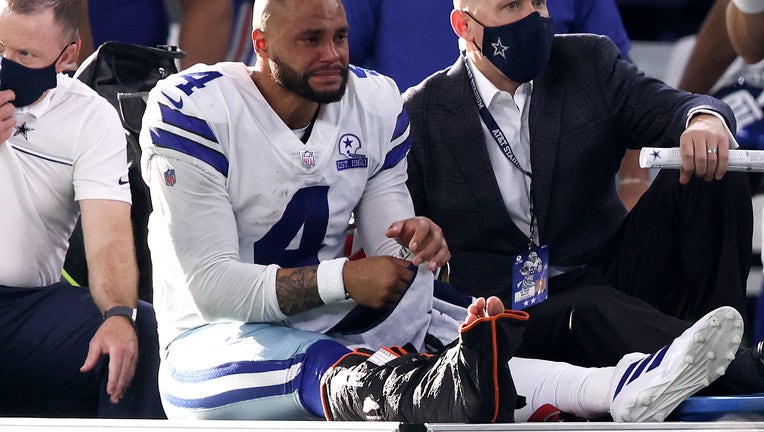 ARLINGTON, TEXAS - OCTOBER 11: Dak Prescott #4 of the Dallas Cowboys is carted off the field after sustaining a leg injury against the New York Giants during the third quarter at AT&T Stadium on October 11, 2020 in Arlington, Texas. (Photo by Tom

Prescott was injured at the end of a 9-yard run when he was tackled by New York defensive back Logan Ryan. His right foot was bent at an awkward angle as Prescott grabbed at his leg in obvious pain.

The lower right leg was placed in a cast before Prescott was loaded on a cart. He covered his face with a towel at times before pulling it away to show he was in tears as he was taken off the field on a cart.

Prescott is not expected to play again this season.

“I feel terrible for him. He was having a tremendous year. He’s made such an impression on me. He’s the leader of this team," said Cowboys head coach Mike McCarthy after the game. "This will just be another chapter in a great story. He’s a fine young man."

Prescott's brother, Tad, shared a photo with the Cowboys QB at the hospital on Sunday night.

"God is good, and he’ll be back STRONGER than ever," Tad tweeted. 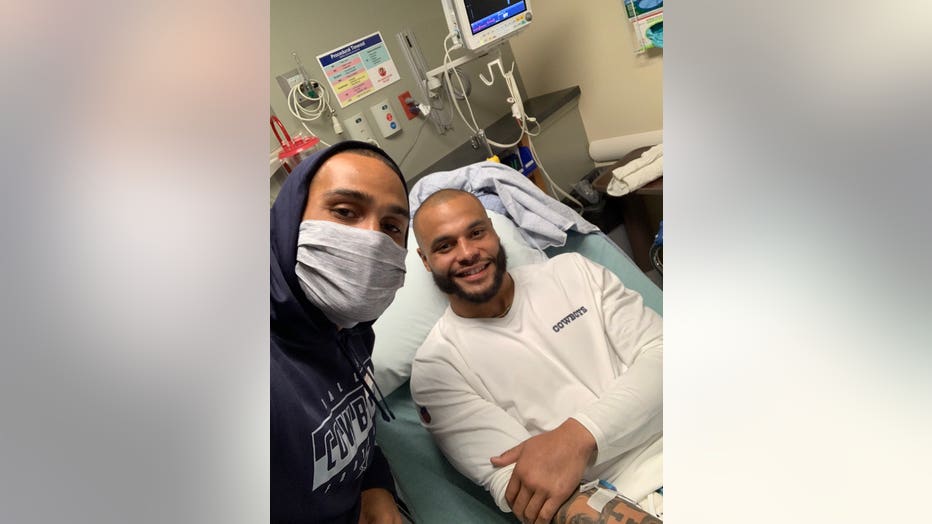 Cowboys owner Jerry Jones said in a statement he knows that Prescott will be able to recover.

"We are all heartbroken for Dak and this very disappointing injury. The outpouring of messages that I have received regarding his setback speaks volumes to the respect and admiration that he has earned from his teammates, former Cowboys players and Cowboys supporters everywhere," Jones said.

Former Cowboys head coach Jason Garrett, now the offensive coordinator for the Giants, was among the many people who came onto the field to check on Prescott.

Not long before the injury, Prescott had his first career touchdown catch from receiver Cedrick Wilson, who took a reverse pitch from running back Ezekiel Elliott.

Prescott was replaced by backup QB and TCU alum Andy Dalton, who led the team on a game-winning drive. Dallas beat New York 37-34 on a last-second field goal.

Dalton said after the game it was tough to see what happened to Prescott.

“I hate to see that for him. It’s emotional. I’m definitely praying for him," Dalton said. "It’s been a lot of fun being around him this year. I just hate it for him."