While Camping World Stadium was packed with football fans on Wednesday for the Cheez-it Bowl, it was far from a sellout crowd. Many in attendance were not concerned about COVID-19 amid rising cases.

ORLANDO, Fla. (AP) - D.J. Uiagalelei completed 21 of 32 passes for 187 yards and a touchdown, Mario Goodrich scored on an 18-yard interception return and No. 19 Clemson beat Iowa State 20-13 on Wednesday night in the Cheez-It Bowl for coach Dabo Swinney’s 150th victory.

Will Shipley had a 12-yard touchdown run and finished with 61 yards rushing and 53 yards receiving for Clemson (10-3). Dacari Collins caught six passes for 53 yards, and B.T. Potter made two field goals. 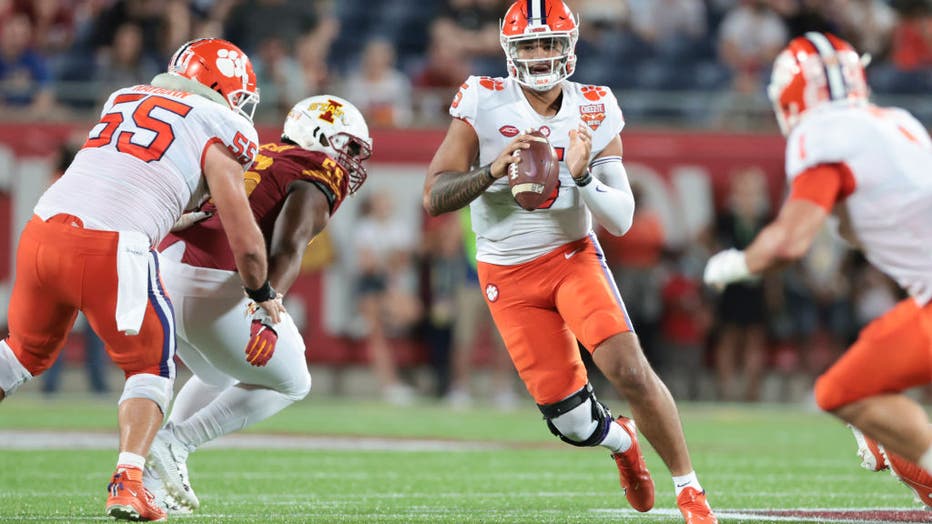 ORLANDO, FLORIDA - DECEMBER 29: D.J. Uiagalelei #5 of the Clemson Tigers scrambles with the ball during the second quarter against the Iowa State Cyclones in the Cheez-It Bowl Game at Camping World Stadium on December 29, 2021 in Orlando, Florida. (P

The Tigers, who lost All-ACC linebacker James Skalski to a leg injury in the second quarter, held the Cyclones (7-6) to three field goals over the first three quarters. Iowa State, which was severely limited by playing star tailback Breece Hall, mustered just 270 yards and 14 first downs against a Clemson defense that came into the game second in the nation in scoring defense.

Goodrich sealed Clemson’s victory with 33 seconds to play when he stripped the ball away from Iowa State quarterback Brock Purdy on a fourth-and-2 play.

Iowa State dropped four of its final six games of the season and lost in a bowl game for a fourth consecutive year.

Purdy, the winningest quarterback in school history, had a pass picked off by Goodrich in the third quarter when Clemson’s Justin Mascoll swatted the ball at the line and Purdy accidentally batted it ahead into the waiting arms of the Tigers’ cornerback. Goodrich’s 18-yard scoring run gave Clemson two scores in a 53-second stretch of the third quarter to push the score to 20-3.

Purdy completed 22 of 39 passes for 204 yards, but his two turnovers proved costly.

Sporting events across the country, including some college football bowl games, have been canceled due to COVID-19 protocols. However, the concerns are not limiting the attendance at the 2021 Cheez-it Bowl.

Swinney, who guided the Tigers to national championships in 2016 and ’18 and to six straight College Football Playoff trips, is the sixth fastest in college football history to 150 victories and just the third to do so in fewer than 15 years.

Iowa State: The Cyclones will be hard-pressed to keep up their recent run of success with 19 senior starters departing — 17 of which had at least 21 starts. Much of the future will be dependent on coach Matt Campbell replacing Purdy and Hall.