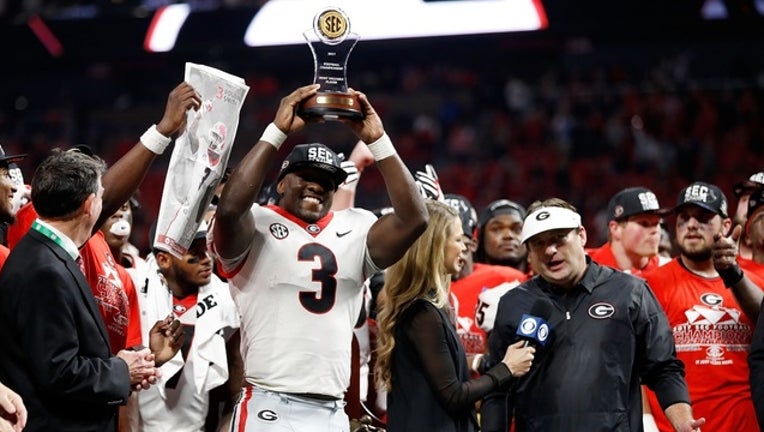 Roquan Smith #3 of the Georgia Bulldogs reacts to winning the game MVP trophy after beating the Auburn Tigers in the SEC Championship at Mercedes-Benz Stadium on December 2, 2017 in Atlanta, Georgia. (Photo by Jamie Squire/Getty Images)

The Bears have spent the offseason collecting pieces they believe will help Trubisky develop into a franchise quarterback. But when Indianapolis took Notre Dame guard Quenton Nelson with the sixth pick, it became apparent Chicago would address the defense.

"What they can expect from me when I arrive is a relentless guy on the field and off the field, going about my business the right way and going to do whatever it takes to put the Bears in the best possible situation every time I step on to the field," Smith said. "And I'm beyond excited, I can't put it into words how excited I am about this opportunity to be a Chicago Bear. It's insane and I'm ready to give the city of Chicago everything I have in me."

Smith joins a team with four straight last-place finishes in the NFC North and just one playoff appearance since the 2006 team's run to the Super Bowl. The Monsters of the Midway haven't finished with a winning record since 2012, Lovie Smith's last season as coach.

That's something they hope Smith will help change.

An All-American and Butkus Award winner as college football's best linebacker, he led Georgia to the national championship game last season. Though he is a bit undersized at 6-foot-1, 236 pounds, he has speed and athleticism and the coverage skills to stay on the field in passing situations. His leadership is also a plus.

Smith figures to line up inside for the Bears. He'll also be reunited with another Bulldog in outside linebacker Leonard Floyd, drafted by Chicago with the No. 9 pick in 2016.

Smith said he "looked up to the guy a lot" and is eager to play with him. He mentioned the Bears' tradition, particularly at linebacker with Dick Butkus, Mike Singletary, Brian Urlacher and Lance Briggs.

Chicago has one second-round pick, two fourth-rounders and one each in the fifth, sixth and seventh. The Bears don't have a third-round selection.

The Bears fired John Fox after three seasons and replaced him with an offensive-minded coach in Matt Nagy, who spent the past 10 years working on Andy Reid's staffs in Philadelphia and Kansas City. They also gave Trubisky some new targets, most notably signing former Pro Bowl receiver Allen Robinson.

The Bears were still looking to boost a rather effective defense. Chicago ranked 10th overall last season despite injuries to several key players, including Floyd, and tied for seventh in the NFL with 42 sacks last season. But the Bears let linebackers Jerrell Freeman, Pernell McPhee and Willie Young go.

Smith called Tucker a "great guy" who taught him "a lot of things." But Fangio has "coached a lot of legends," including similarly sized linebackers NaVorro Bowman and Patrick Willis in San Francisco.

"I feel like those guys, we're all different in our own way, especially in being very unique. I feel like me, I feel like me and Patrick Willis both have similar speed and whatnot and both have a high IQ of the game."