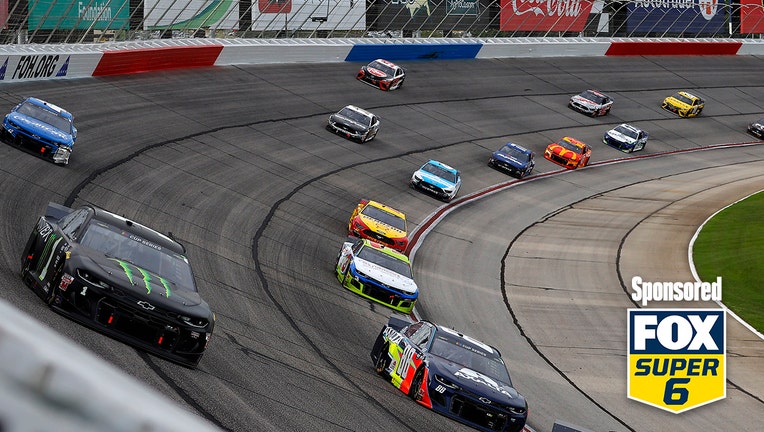 After a quick journey to the West Coast that saw Kyle Larson and Martin Truex Jr. win in Las Vegas and Phoenix, NASCAR’s Cup Series has Georgia on its mind for the first of two races at Atlanta Motor Speedway.

This weekend’s Folds of Honor QuikTrip 500 could be another chance to see a new face in Victory Lane. Through the first five races of the season, five different drivers have taken the checkered flag, while Denny Hamlin continues to hold the overall points lead thanks to four top-five finishes and three stages wins.

And you could be a big winner thanks to Sunday's action, as well. All you have to do is pick the right answers to six questions about Stage 2 of the race, and you can win the jackpot of $10,000 of Clint Bowyer’s money.

It’s absolutely free to play! Just download the FOX Super 6 app on your phone or mobile device and answer the six questions. That’s all you need to do – for free.

Here are the six questions that are in play for this week’s Fold of Honor QuikTrip 500 race at Atlanta:

Will Ryan Blaney, Denny Hamlin and Brad Keselowski all finish in the top 10 of Stage 2?

The choices: Yes or no

In the last three races, those three have all placed in the top 10 at the end of Stage 2. It also happens to be true that they have finished in the top five of Stage 2 in both West Coast races, so the cars they are running are holding well through the races. It’s a good trend to go with.

Which of these drivers will have the fastest lap by the end of Stage 2?

Truex’s car had some serious speed last week – enough that it carried over to winning the race. Logano, however, was right there with him. And on a season-long trend, Hamlin’s car has run extremely fast through Stage 2.

How many cars will Hendrick Motorsports have in the Top 10 of Stage 2?

William Byron and Chase Elliott both cracked the top 10 of Stage 2 last week in Phoenix. Byron has had some really good runs this year, so he is the most likely guy to crack into that mix.

Truex was second at the end of Stage 2 last week. In the last four races, Truex has finished second, fourth, fifth and eighth in Stage 2, and the only race that he wasn’t in the top 10 at the conclusion of Stage 2 was the Daytona 500, where he was 25th.

How many cars will Toyota have in top 10 finishing positions of Stage 2?

Toyota had three cars in the top 10 last week in Phoenix with Truex (second), Hamlin (third) and Christopher Bell (10th). The week before in Las Vegas, the manufacturer placed four in the top 10 with Hamlin (third), Bell (seventh), Truex (eighth) and Kyle Busch (ninth). If you like Larson to be the best guy in Stage 2, you would look at the Chevy option.

Which of the below drivers will have the best finishing position in Stage 2?

It seems easy to say at this point, but Hamlin has been the one who has featured the best Stage 2 finishes for most of the season. Truex, however, is starting to close that gap. Either driver could be taken with confidence.

Play Clint Bowyer's NASCAR Stage 2 FOX Super 6 contest for free and you could win $10,000! Just download the FOX Super 6 app and make your picks now for your chance to win!