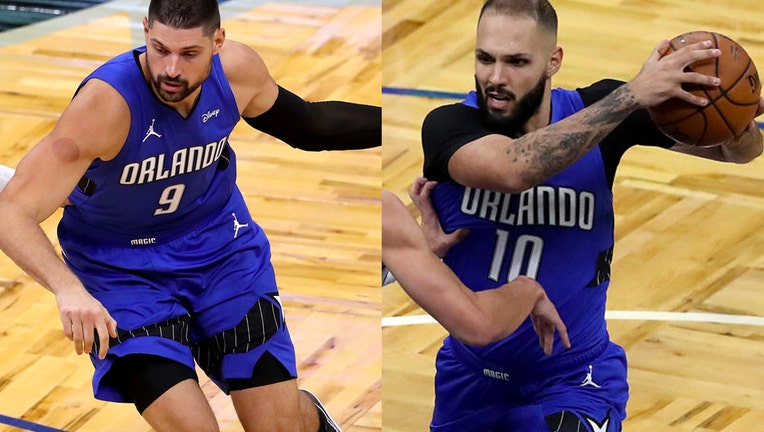 ORLANDO, Fla. - The Orlando Magic's top scorers are no longer on the team, as trades and deals were made on Thursday, the Associated Press reported.

All-Star forward Nikola Vucevic is being traded from the Orlando Magic to the Chicago Bulls, a person with knowledge of the deal said Thursday.

Vucevic and Al-Farouq Aminu are going to the Bulls in exchange for Wendell Carter Jr. and two future first-round selections, the person told The Associated Press on condition of anonymity because the deal was still pending NBA approval.

The deal would appear to be the start of a rebuild for the Magic, with Vucevic unquestionably the team’s best player for the past several seasons. The two-time All-Star is averaging a career-best 24.5 points this season and 11.8 rebounds.

He also has two full seasons left after this one on his contract, a four-year, $100 million deal signed in 2019. Vucevic is in his 10th NBA season, the last nine of which have been with the Magic.

Evan Fournier is being traded by the Orlando Magic to the Boston Celtics for a pair of second-round draft picks, a person with direct knowledge of the matter said Thursday.

The Celtics were able to take on Fournier’s salary by using part of the trade exception that they created last year in the move that sent Gordon Hayward to Charlotte, the person told The Associated Press on condition of anonymity because the deal was still pending NBA approval.

Fournier is averaging career highs of 19.7 points and 3.7 assists this season for the Magic, who turned trade-deadline day in the NBA into the start of their rebuild.

Fournier gives the Celtics added wing depth and another ballhandler. The Celtics started Thursday eighth in the Eastern Conference with a 21-23 record, well below their expectations coming into the season.

Vucevic and Fournier were Orlando’s two leading scorers this season.