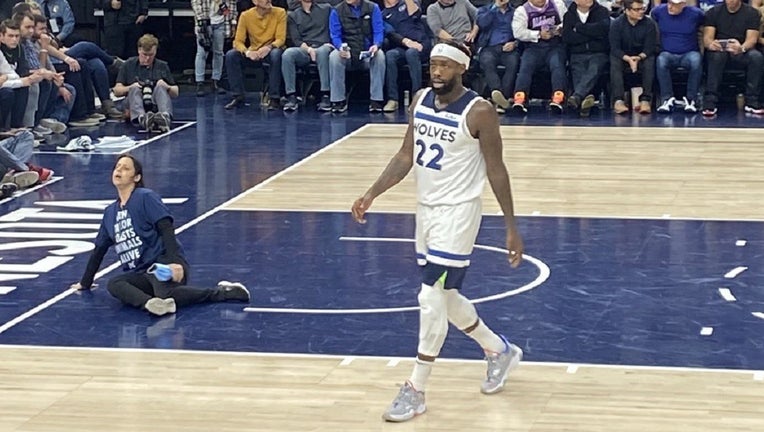 This photo from the activist group shows their member, identified as Alicia Santurio, on the court as Patrick Beverley walks past. (Direct Action Everywhere)

MINNEAPOLIS - A woman had to be escorted off the floor at Target Center during the Minnesota Timberwolves’ play-in game Tuesday night after apparently trying to glue herself to the baseline under a basket.

The incident happened during the second quarter, as the Timberwolves were trying to recover from a slow start. The Timberwolves need to beat the Clippers to earn the No. 7 seed in the Western Conference Playoffs, otherwise they’ll face either the Spurs or Pelicans Friday night with their season on the line.

With about 3:34 left in the first half, a female protester went on the floor and glued her hand to the court. The woman, a protester indentified in a news release as Alicia Santurio, was wearing a shirt that said, "Glen Taylor roasts animals alive." She was protesting the mass killing of chickens at Rembrandt Enterprises, a factory egg farm in Iowa owned by Taylor.

The woman was quickly escorted off the floor by at least two police officers. The game had to be stopped for a few minutes as Target Center employees worked to clean up the mess.

The Timberwolves released a statement about the incident during the second half of Tuesday's game.

The incident led to plenty of "glue" jokes on social media.