UKRAINE - A group of European leaders is fighting to allow Ukrainian President Volodymyr Zelensky and the people of Ukraine to be nominated for the Nobel Peace Prize, despite the Nobel Committee’s expired deadline.

In a letter, dated March 11, the politicians called on the committee to re-open and reconsider the 2022 nomination rules for the honor.

"Brave Ukrainian men and women are fighting to preserve democracy and self-government," the letter read. "From the defiance democratically elected Ukrainian President Volodymyr Zelensky to the man with tears in his eyes saying goodbye to his family to fight for his country, people all over Ukraine are rising up to resist the forces of authoritarianism. Our words of sympathy and support can hardly do justice to the sacrifices they make for the principles of human rights and peace."

Ukrainian President Volodymyr Zelenskyy receives a standing ovation from the European Parliament. During his speech Tuesday via video link, Zelenskyy thanked the European Union for its continued support. He spoke about the devastation Ukraine is experiencing from airstrikes, bombs and missiles, but how the Russian invasion isn't going to quote "beak us, we are strong." Zelenskyy emphasized the Ukrainian people are "motivated" and "fighting for our rights, for freedoms, for life".

"We believe that now is the time to show the people of Ukraine that the world is on their side. We therefore humbly call upon you, the Committee, to consider: Extending and thereby re-opening the nomination procedure for the Nobel Peace Prize until March 31, 2022 to allow for a Nobel Peace Prize nomination for President Zelensky and the people of Ukraine," the letter continued.

The deadline for submitting candidates for the Nobel Peace Prize expired in February. 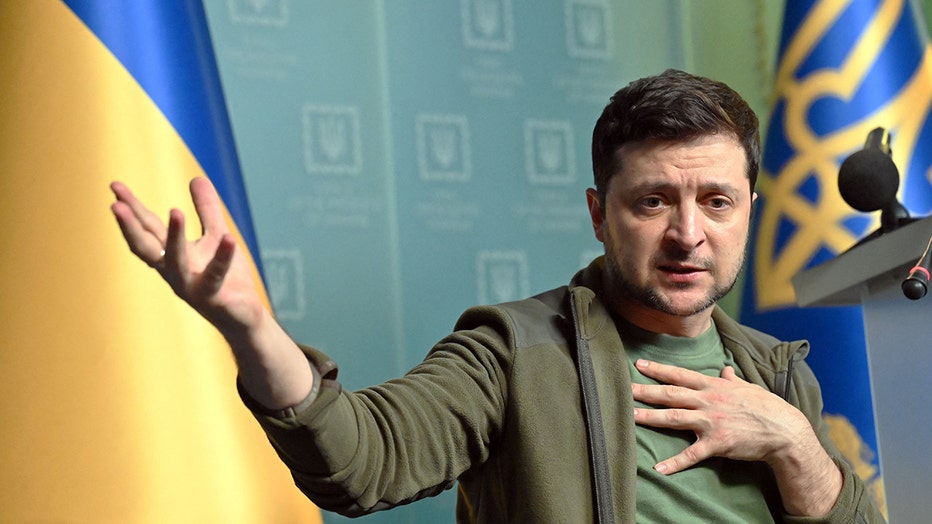 The Nobel Peace Prize is awarded by a committee elected by the Norwegian Parliament. The committee chooses the laureates from a list in October through a majority vote, and they receive the prize in December.

"Although we are aware that this is a break with procedure, we do believe that this break is justified by the current unprecedented situation. It is our democratic duty to stand up to authoritarianism and to support a people fighting for democracy and their right to self-government," the letter continued.

In 2021, the Nobel Peace Prize was awarded to journalists Maria Ressa of the Philippines and Dmitry Muratov of Russia.

The Norwegian Nobel Committee cited their fight for freedom of expression, stressing that it is vital in promoting peace.

"Free, independent and fact-based journalism serves to protect against abuse of power, lies and war propaganda," said Berit Reiss-Andersen, chair of the committee.

"Without freedom of expression and freedom of the press, it will be difficult to successfully promote fraternity between nations, disarmament and a better world order to succeed in our time," she said.