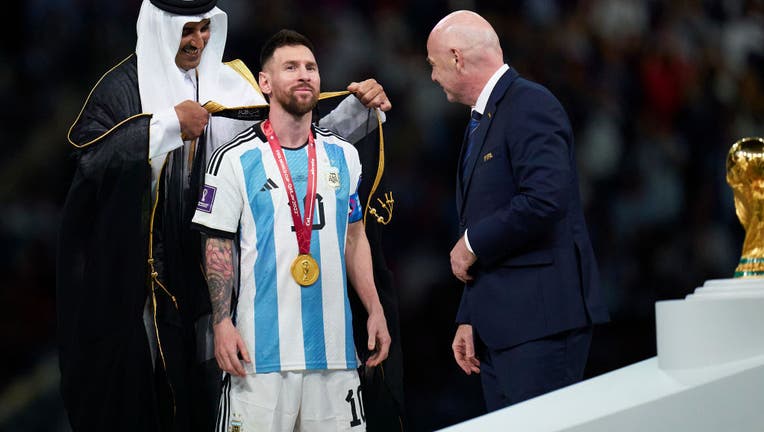 Lionel Messi of Argentina receives a Robe from Tamim bin Hamad Al Thani the Emir of Qatar during the FIFA World Cup Qatar 2022 Final match between Argentina and France at Lusail Stadium on December 18, 2022 in Lusail City, Qatar. (Photo by Quality Sp

Lionel Messi, wearing a black Qatari robe over his blue-and-white Argentina shirt, kissed the World Cup, shuffled toward his teammates and hoisted the golden trophy high in the air.

It was an iconic sight that finally — definitively — places the soccer superstar in the pantheon of the game’s greatest players.

Messi’s once-in-a-generation career is complete: He is a World Cup champion.

In one of the wildest finals in the tournament's 92-year history, Argentina won its third World Cup title by beating France 4-2 in a penalty shootout after a 3-3 draw featuring two goals from the 35-year-old Messi and a hat trick by his heir apparent, France forward Kylian Mbappé. 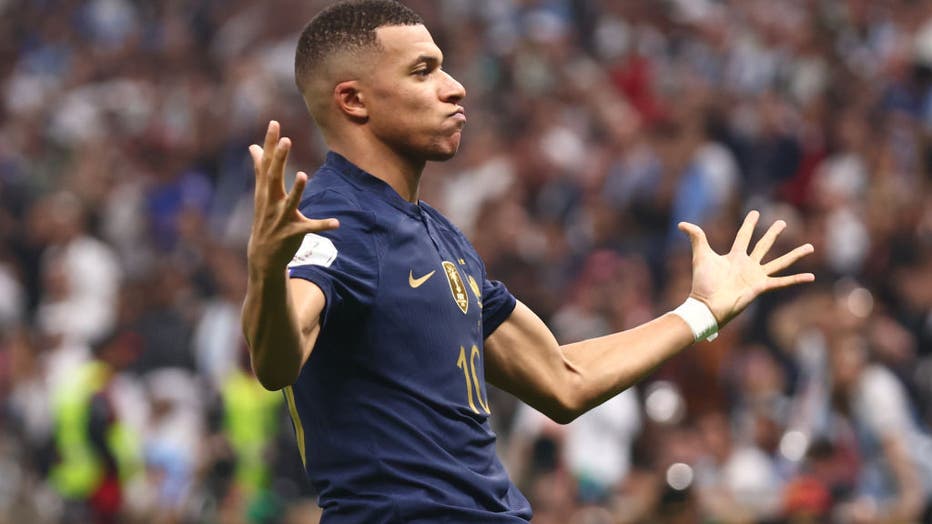 Kylian Mbappe of France celebrates scoring a goal to make it 2-2 during the FIFA World Cup Qatar 2022 Final match between Argentina and France at Lusail Stadium on December 18, 2022 in Lusail City, Qatar. (Photo by Chris Brunskill/Fantasista/Getty Im

"It’s just crazy that it became a reality this way," Messi said. "I craved for this so much. I knew God would bring this gift to me. I had the feeling that this (World Cup) was the one."

Amid the chaos, Mbappé did all he could to emulate Brazil great Pelé as a champion at his first two World Cups. Even scoring the first hat trick in a final since Geoff Hurst for England in 1966.

Now there’s no debate. Messi joins Pelé — a record three-time World Cup champion — and Diego Maradona, the late Argentina great with whom Messi was so often compared, in an exclusive club of the best soccer players of all time.

Who is the greatest? It's a discussion that will rage forever because there can never be a definitive answer. Messi has put up a good argument, though, and — with the World Cup title on his resume — he is surely above Cristiano Ronaldo as the best player of his generation. 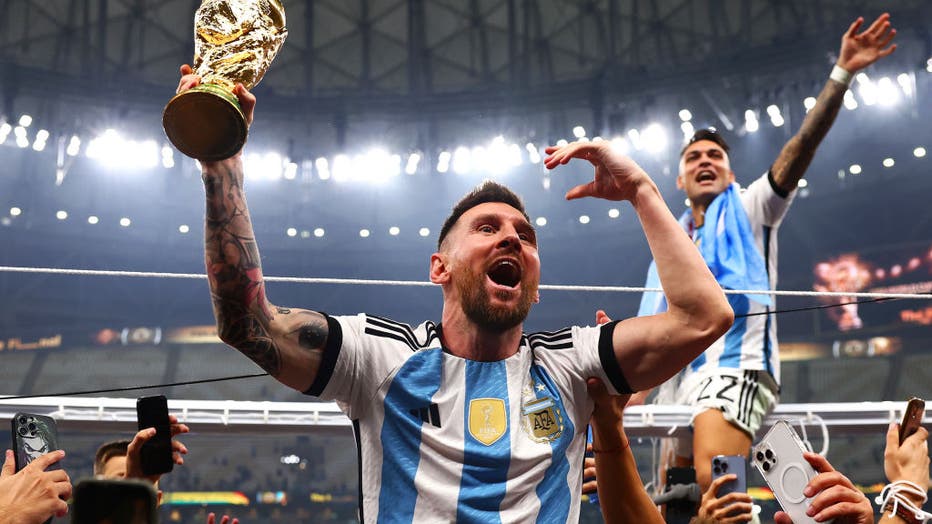 Lionel Messi of Argentina celebrates with the World Cup trophy at the end of the FIFA World Cup Qatar 2022 Final match between Argentina and France at Lusail Stadium on December 18, 2022 in Lusail City, Qatar. (Photo by Chris Brunskill/Fantasista/Get

Messi achieved what Maradona did in 1986 and dominated a World Cup for Argentina. He scored seven goals and embraced the responsibility of leading his team out of those dark moments after a shocking 2-1 loss to Saudi Arabia in the group stage.

Playing in the spirit of Maradona, Messi coupled his dazzling skills with rarely seen aggression and led Argentina to the title by becoming the first man in a single edition of the World Cup to score in the group stage and then in every round of the knockout stage.

The torch will one day pass to Mbappé, but not just yet.

"Let's go, Argentina!" Messi roared into a microphone on the field in the post-match celebrations after playing in a record 26th World Cup match.

Later, he said: "I can’t wait to be in Argentina to witness the insanity of this."

Messi had a tantalizing glimpse of the 18-carat gold World Cup trophy when walking on the stage to collect the Golden Ball, awarded to the player of the tournament. He even kissed the World Cup and rubbed it repeatedly.

He got his hands on it for good about 10 minutes later, after a ceremonial robe was draped over his shoulders by Qatar’s emir, Sheikh Tamim bin Hamad Al Thani. And, oh, did he enjoy it, celebrating with his family and the teammates who put Argentina atop the soccer world for the first time since the 1986 World Cup in Mexico. The country's other title came in 1978 on home soil.

Messi was in scintillating form from the start of the final, putting Argentina ahead from the penalty spot after Angel Di Maria was tripped and later playing a part in a flowing team move that resulted in Di Maria making it 2-0 after 36 minutes.

Mbappé, on the other hand, was anonymous until bursting into life by scoring two goals in a 97-second span — one an 80th-minute penalty, the other a volley from just inside the area after a quick exchange of passes — to take the game to extra time at 2-2.

Messi still had plenty of energy and he was on hand to tap in his second goal in the 108th minute, with a France defender clearing the ball just after it had crossed the line. Argentina was on the brink of the title once again, but there was still time for another penalty from Mbappé, after a handball, to take the thrilling game to a shootout.

Mbappé and Messi took their teams' first kicks and scored. Kingsley Coman had an attempt saved by Argentina goalkeeper Emi Martinez and Aurelien Tchouameni then missed for France, giving Gonzalo Montiel the opportunity to end it. He converted the penalty to the left and sparked wild celebrations.

"It’s such enjoyment to be at the top, the summit," Argentina coach Lionel Scaloni said. "Now this is unique."

Europe’s run of four straight World Cup winners, dating to 2006, came to an end. The last South American champion was Brazil, and that was also in Asia — when Japan and South Korea hosted the tournament in 2002.

In Qatar, Argentina backed up its victory from last year's Copa America, its first major trophy since 1993. It's quite the climax to Messi’s international career, which is not over just yet. He said after the match that he would continue to play with the national team.

It was quite a final for a unique World Cup — the first to be played in the Arab world.

For FIFA and the Qatari organizers, a final between two major soccer nations and the world’s two best players represented a perfect way to cap a tournament laced in controversy ever since the scandal-shrouded vote in 2010 to give the event to a tiny Arab emirate.

The years-long scrutiny since has focused on the switch of dates from the traditional June-July period to November-December, strong criticism of how migrant workers have been treated, and then unease about taking soccer’s biggest event to a nation where homosexual acts are illegal.

On Sunday, there was one narrative at play for most people: Could Messi do it?

He could, despite the 23-year-old Mbappé doing all he could to deny his Paris Saint-Germain teammate. Finishing the tournament as the top scorer with eight goals is likely only a crumb of comfort.

Messi has been a man on a mission in the Middle East, determined to erase memories of his only other World Cup final — in 2014 when Argentina lost to Germany 1-0 and Messi squandered a great chance in the second half.

On that night at the Maracana Stadium, Messi stared down at that golden World Cup trophy that escaped him.

Eight years later, he raised it aloft in the biggest moment of a career like no other.