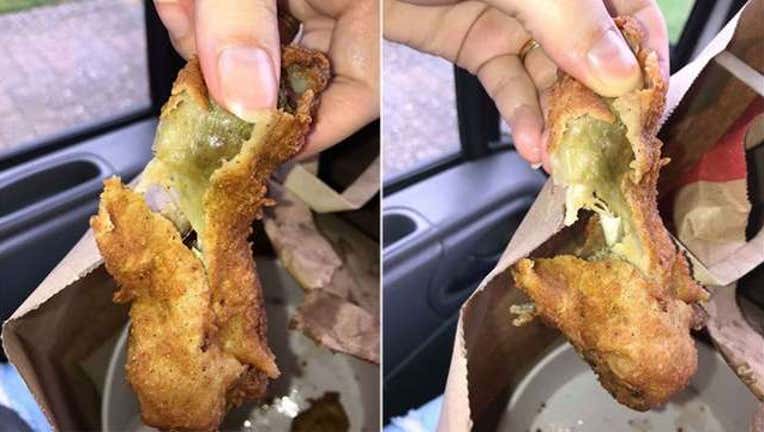 A pregnant woman in the United Kingdom claims that she sold a piece of green chicken from a KFC. She took a picture of the oddly colored piece of meat, which appears to be green underneath the fried coating.

The unusual looking food was purchased at a KFC in Lakeside, England, The Sun reports. Chanelle Jackson claims that she ordered two Mighty Buckets for her and her family. When she went to give a piece of chicken to her 15-month-old daughter, however, she noticed it looked off.

“As soon as I looked inside, I knew it wasn't right,” she told The Sun. “Luckily I'd not taken a bite of it yet though."

"I'm not sure why it was that color, but I knew I didn't want to eat it, especially as I am 30 weeks pregnant,” she continued. “I was going to share it with my 15-month-old daughter as they had run out of popcorn chicken, and I don't know what would have happened if she had eaten it. We checked the rest of the chicken, but it was the only piece that had that color.”

She claims that she then returned the chicken to the restaurant, where the employees shared her reaction. They gave her some replacement food, but Jackson claims that she had lost her appetite.

“I think I’ll probably be avoiding KFC for a while after this.”

In a statement obtained by The Sun, however, KFC claims that the chicken looks worse than it actually is. The statement says, “We’ve looked into this and while it’s clearly not nice to see, it’s completely harmless and occasionally comes as a result of dealing with fresh chicken. That said, we’re sorry for Chanelle’s experience and immediately offered her a refund when our team members found out.”

KFC did not immediately respond to Fox News' request for comment.