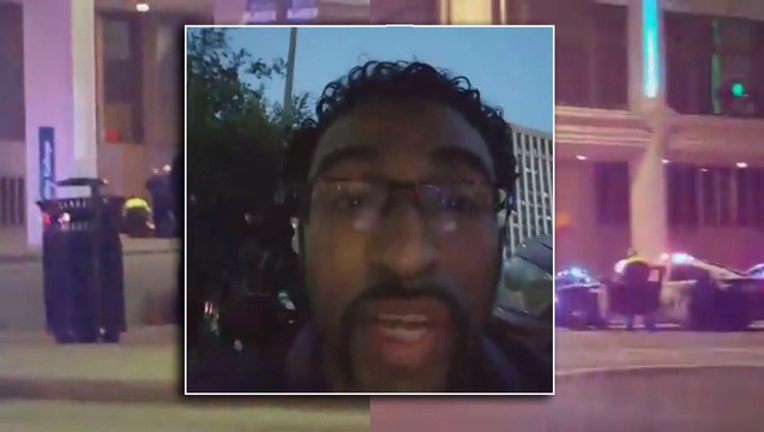 DALLAS, Texas - Michael Kevin Bautista was one of the first citizen reporters to live-stream video from the streets of downtown Dallas as snipers fired shots at Dallas police officers.

It was still light outside when Bautista's first Facebook Live video began around 8 p.m. CST, which showed peaceful protesters marching through a downtown Dallas street. The video was just under a minute long and Bautista marveled at the number of people lined up in protest marches, chanting and holding signs.

A second, longer video, posted just minutes, later showed a large frontline of protesters marching toward Bautista. Motorcycle officers, as well as police on bicycles and on foot, preceded the crowds. Their chants were choreographed - "Hands up!" a few could be heard yelling. The crowd responded "Don't shoot!" with arms raised in the air.

As the crowd filed past, Bautista held a steady hand while broadcasting the hundreds who came to protest shootings of black men by police across the country.

Just as the sun began to set in Dallas, around 9 p.m. CST, Bautista began streaming live on Facebook after hearing the first of what would be dozens of shots fired at officers near the protests. Fast-firing rounds could be heard going off behind him as he repeated "holy [expletive]" while looking into the camera, then over his shoulder.

Bautista turned the camera to show his viewers the officers laying on the ground behind their cruisers as shots fired down at them. At the time, neither Bautista nor the officers knew there were two snipers shooting down from a building somewhere above them.

Around 0:40, Bautista says "they're shooting right now and there's an officer down. It's coming from the right, over there, from around these buildings."

As he continued to stream, shooting subsided and officers began to yell for Bautista and others to move away from the area.

His final and longest video began with scenes of the aftermath of the protests - and then shootings - which ultimately resulted in the death of several Dallas police officers.

As he seemed to process what he witnessed in the last few hours, he talked into the camera about people he talked to and stories he heard from other witnesses.

Bautista talked to those watching his live Facebook video directly, as he pressed his stomach down on the ground near where police cars still lined the streets.

"This is crazy. I did not think anything like this was gonna happen today," he said. "I haven't felt like this since I was overseas."

Later in the 40 minute video, Bautista was approached by officers who searched and released him from the scene. He began to jog away with the video still rolling. He ran straight into a group of onlookers, including a reporter from FOX 4 KDFW.

Bautista soon went from a live broadcast on Facebook to a live television broadcast on Fox News and FOX 4 KDFW. He spoke to the reporter about what he saw as SWAT teams ran around corners to try and find the shooters, and watched as they pulled injured officers out of harm's way.

He continued to broadcast live on Facebook as he was interviewed by reporters. He ended the video as wind began to take control of the aud io - and he continued to recount with bystanders what happened.