Falling iguanas in the forecast for Florida

Iguanas are cold-blooded and when the temperatures drop, the normally tropical reptiles slow and can become cold-stunned. If they happen to be in a tree or some brush, which is where they like to hang out, they might fall during their cold-stunned slumber.

While it's true cold-stunned iguanas occasionally fall from trees in South Florida, don't expect to get knocked out by a falling reptile on your next visit to the Sunshine State.

In previous years when the temperatures are forecast to drop into the low 40s, the National Weather Service Office in Miami issues a "falling iguana" warning to residents. The unique weather alerts have been issued the last two Florida winters.

A couple of notes for my northern friends who might think our strange state is full of iguanas falling from trees: This doesn't happen very often and iguanas are not native to Florida. Green iguanas are an invasive species in Florida, just like the Burmese Python, wild monkeys, and the giant toxic cane toads.

According to the Florida Fish and Wildlife Conservation Commission, the first reports of the lizard-like reptiles started in the 1960s around Miami-Dade County. The Florida iguana population has continued to grow, expanding as far north as St. Lucie County and along the Gulf Coast. Green iguanas can grow up to five feet and weigh close to 20 pounds.

According to the FWC, escaped or released pets are the primary source of invasive species in Florida.

Back to the iguana weather warning.

Iguanas are cold-blooded and when the temperatures drop, the normally tropical reptiles slow and can become cold-stunned. If they happen to be in a tree or some brush, which is where they like to hang out, they might fall during their cold-stunned slumber.

Zoo Miami Communications Director Ron Magill said the temperatures need to be below 50 degrees constantly to slow an iguana considerably.

"Though there have been instances when temperatures have dropped low enough for an extended period of time where iguanas are stunned, it is not a regular occurrence," Magill said. 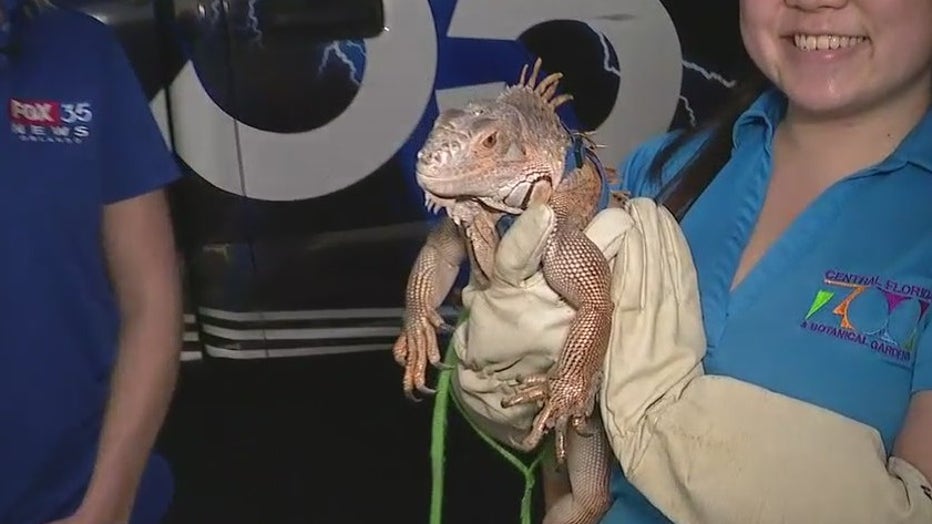 On the rare occasion, the temperatures in South Florida drop to the mid-to-low 40s for about 8 hours or more this is enough time for iguanas to become incapacitated. The iguanas aren't usually dead but snap out of it after a few hours.

And remember how some iguanas are larger than several feet? It takes more to slow their roll.

"It depends on the size of the iguana because larger animals will take longer to cool down as their body mass can maintain heat longer," Magill explained. "Whereas a 2-foot iguana may become stunned in a couple of hours at 50 degrees, it may take twice as long for a 6-foot iguana to react in a similar manner."

A woman in Hollywood, Florida was surprised to find an unexpected stranger inside of her toilet. Michelle Bennett said she was startled to find an iguana in her toilet as she lifted the lid.

Recent studies have also shown that some species of lizards are adapting and getting used to colder temperatures which could mean the iguanas might be able to survive further north.

A 2020 study published in Biology Letters found that the South Florida lizards are adapting in response to more frequent extreme climate events.

Magill confirms that the iguana-weather events are less frequent.

"We are also noticing that with each passing year, there are less and less iguanas being found ‘cold stunned.’" Magill said. "This may be because they are adapting to finding shelter in holes and around water where the temperature is usually higher than the ambient temperature during the winter months which enables them to survive extended cold fronts."

Until the next time iguanas make it into the forecast, here's a look at January 2020 images when temperatures in Miami dropped into the 40s stunning the local iguana population.

LINK: Get updates on this story from FOXweather.com.