It’s 2022 and more and more developers are investing in net-zero communities.

Going net-zero basically means that the greenhouse gas emissions produced by a country, state, city, company, or even a building are counterbalanced by an equal amount of emissions that are reduced.

For instance, homes that utilize solar panels and come installed with electric vehicle charging stations to encourage greener living are aiming to neutralize the other homes, buildings and communities that emit their share of greenhouse gases.

Going net-zero at home and in your general daily activities will help reduce your carbon footprint, experts say.

In theory, if large companies and individuals are able to reduce their greenhouse emissions by at least 50% by 2050, it will greatly improve our chances to fight climate change.

But for now, let’s talk about what we can do in our own homes. 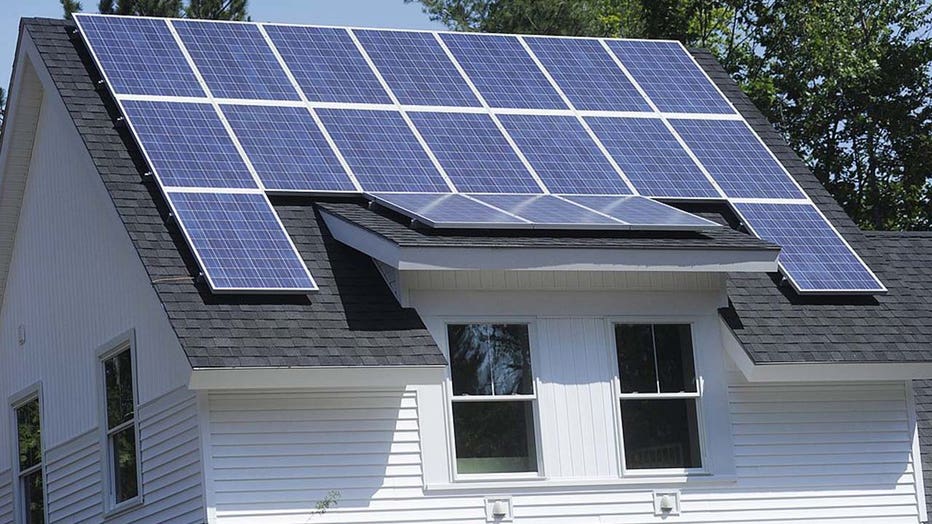 Net-zero means that the greenhouse gas emissions produced by a country, state, city, company, or even a building are counterbalanced by an equal amount of emissions that are reduced.

"There are distinctions in the definition. There is such a thing as a net-zero building where the building envelope itself doesn’t emit greenhouse gases. That would mean that most of the activities that take place inside that building will use electricity that is sourced from renewable resources such as solar power or wind power, geothermal, et cetera. But most of the buildings that are being constructed now will be wholly electric and would not rely on natural gas, which is a fossil fuel," explained Jonathan Parfrey, executive director of Climate Resolve, a nonprofit that connects communities, organizations and policymakers to address a global problem with local action.

Going net-zero to help slow or reduce climate change sounds like a pretty hefty ask for all of the billions of humans on this planet but it isn’t impossible, according to experts.

The first step to achieving this goal was getting world leaders to sign the Paris Climate Agreement but the next step is implementing practices and incentivizing companies and governments to go green.

The authoritative Intergovernmental Panel on Climate Change (IPCC) report, which calls climate change clearly human-caused and "unequivocal" and "an established fact," makes more precise and warmer forecasts for the 21st century than it did last time it was issued in 2013.

While the Paris Agreement sets a global objective, action to achieve that objective is driven at the national level – each country is responsible for setting its own policies to achieve the common goal. The delivery of these policies will take place at the local level. All countries, cities and businesses need to develop plans as to how they intend to achieve net-zero.

The cost to build a traditionally constructed home as opposed to a net-zero home is not as different as one might think.

According to the Zero Energy Project — a nonprofit educational organization that aims to help home buyers, builders, designers, and real estate professionals take meaningful steps towards reducing carbon emissions and energy through net-zero construction — net-zero homes cost only a couple thousand dollars more and will eventually cost less in the long-term.

One example of an up-and-coming net-zero community in Southern California is the Centennial at Tejon Ranch, a planned development of more than 19,300 homes and 10.1 million square feet of commercial and industrial space.

"Centennial, which has committed to including 3,480 affordable housing units as a part of its Los Angeles County approvals, will now also become a greater net-zero project, meeting and exceeding all the state’s goals and requirements to combat climate change," according to the development website.

"When it comes to the Centennial project, every residential parking spot is planning to have an EV charger. For the first 50% of all residential units that get purchased, they will receive a $5,000 incentive, on top of any other incentive to get an electric vehicle. There’s no natural gas being used in the residential units whatsoever," Parfrey said.

Developers can say with confidence that while investing in a net-zero home or community may cost more upfront, the cost to keep those homes and buildings running, in the long term, will pay for itself and more, according to Panama Bartholomy, founder of the Building Decarbonization Coalition.

The Building Decarbonization Coalition "unites building industry stakeholders with energy providers, environmental organizations and local governments to help electrify homes and workspaces with clean energy," according to its website.

For instance, in California, developers will be required to install solar panels on all new low-rise homes in the next two years, Bartholomy explained.

"This will be for commercial buildings and large multifamily as well. They are required, the state, before they pass laws like that, are required to show that that’s going to be cost-effective, meaning that it will pay back over the life of a mortgage," Bartholomy said.

De Young Properties, a California company that has made it its mission to create zero-energy homes and communities since 2009, has said the average cost of a net-zero home can be anywhere between $350,000 to $450,000, which are comparable to homes that are not built to reduce its carbon footprint.

"Yes. If you put the money upfront, you will save on operations and maintenance, without a doubt. I drive an electric vehicle. I’ve been driving an electric vehicle for over 10 years, and it did cost a little extra upfront. But do you know how much I pay in fuel? Which is the electricity that goes into it? Like $20 a month. $10, $15 a month? I think that that is really good. So over the course of time, the electric vehicle, which performs far better than any gas-powered vehicle I’ve ever had, over time, that car will pay for itself," said Parfrey, and he believes an electric vehicle stands as a good analogy for a net-zero home.

RELATED: How to reduce your carbon footprint: Practical tips for day-to-day life

Ways to go net-zero at home and beyond

Achieving 100% net-zero for the entire country seems like a stretch, but there are ways that are absolutely feasible to get your existing home closer to that goal.

The National Academies of Science, Engineering and Medicine has several easy guidelines to consider that will help homeowners reduce their carbon footprint.

Use vehicles that are powered by electricity instead of fossil fuels. Transportation is one of the harder sectors to rein in when it comes to controlling greenhouse gas emissions, according to Parfrey, but it can be done.

"We’re also firm believers in really good planning. People being able to live near where they work, being able to walk places, being able to even jump on a bicycle that’s protected so that you can get around your neighborhood. If people have confidence in these measures, that they know they can charge their car, that they can safely walk their neighborhoods, we can see dramatic reductions in greenhouse gas emissions and indeed meet our targets," Parfrey continued.

"Now electric vehicles today are a little bit of a price premium, so it’s not quite the same price you’re paying for your gas but it’s getting really close and within a couple of years, they’ll probably be the same price," said Bruce Usher, professor at Columbia Business School and co-director of the Tamer Center for Social Enterprise.

And depending on where you live and work, Usher said making a decision to switch to an electric vehicle could cut your emissions down anywhere from 15-20%.

Use energy more efficiently. Switching out your gas stove for an electric one is one way to head in the direction of net-zero living. This goes for your dryer, washer, and water heater - basically, anything that can consume electricity can be done so more efficiently even if you don’t live in these newfangled net-zero communities.

"Whether you’re the federal government, a large company, or an individual, the tools are pretty similar for most. Let’s start with the easiest and the most important things. The first is, converting from fossil fuel-based electricity to renewable generated electricity, essentially wind and solar. The good news is, there’s lots of wind and solar power available, you can invest in or buy more. It’s really cheap and it’s scalable, we can build an enormous amount of it," Usher said.

Remove carbon dioxide from the atmosphere. This is also known as direct air capture, which is one type of carbon offset credit, according to Usher.

Direct air capture uses technology that extracts air from our atmosphere, extracts the CO2 in that air, and buries that CO2 underground, according to the International Energy Agency.

While this innovative method works to help reduce our carbon emissions, it’s expensive and that’s how it goes much of the time with many products - you get what you pay for.

While purchasing carbon credits might sound like a solid solution to picking up the slack of the other 50% of your emissions in a different part of the world or country, like most things, it comes with hurdles.

"A carbon credit, they’re not all created equal," Usher said. "And the reason for that is that it’s essentially an unregulated market. There is no government oversight panel."

"As a result, you get a lot of different credits out there," Usher continued. An example could be protecting trees from being cut down, Usher posited.

Deforestation contributes massive amounts of emissions that are harmful to our atmosphere. However, the issue with spending your money to purchase carbon credits to slow deforestation is that the individual or company who takes your carbon credit could just walk across the street and cut down a different set of trees.

"This is called leakage," Usher said. "If I buy carbon credit and in someplace else, someone does that activity anyway, I would call that leakage."

Usher said that while the carbon credit market is still finding its bearings, he believes over time it will become more reliable and regulated with actual, reliable options to help offset carbon emissions. And this method could be a potentially feasible way for a person to reduce their emissions even further.

"It’s a solvable problem, but there’s a catch, which is, it’s only solvable if everybody cooperates," Usher said. "The problem is not, can we reduce emissions? Do we understand what the problem is; do we understand what we need to do; do we have the tools to do it; and do we have the capital to invest in these things like solar? The answer to those four questions is all yes."