Captivating new video from NASA’s Perseverance Rover shows the clearest, closest images yet of a solar eclipse on Mars.

The video shared by NASA captured Phobos, Mars’ potato-shaped moon, crossing the face of the sun for an eclipse that lasted just over 40 seconds. A solar filter reduced light intensity, giving scientists a chance to see more details in the shape of Phobos’ shadow, "like ridges and bumps on the moon’s landscape."

"You can also see sunspots," said Mark Lemmon, a planetary astronomer with the Space Science Institute in Colorado. "And it’s cool that you can see this eclipse exactly as the rover saw it from Mars."

Perseverance filmed the video on its 397th day of the Mars mission, which hopes to find signs of ancient life. Scientists believe that if life ever flourished on Mars, it would have happened 3 billion to 4 billion years ago, when water still flowed on the planet.

The rover’s arm drills down and collects rock samples containing possible signs of bygone microscopic life. Three to four dozen chalk-size samples will be sealed in tubes and set aside to be retrieved eventually by another rover and brought homeward by another rocket ship.

Perseverance is the ninth U.S. spacecraft since the 1970s to successfully land on Mars.

"I knew it was going to be good, but I didn’t expect it to be this amazing," said Rachel Howson of Malin Space Science Systems in San Diego. "It feels like a birthday or holiday when they arrive. You know what’s coming, but there is still an element of surprise when you get to see the final product." 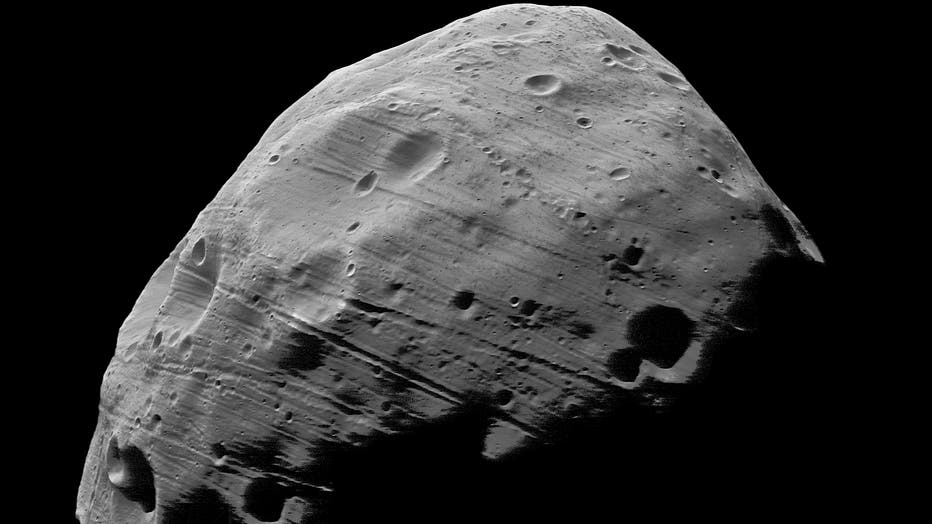 IN SAPCE, JULY 23: This handout image from ESA/NASA shows the highest-resolution full-disc image yet of the surface of the moon Phobos.(Photo by NASA/ESA via Getty Images)

NASA scientists are sure that Phobos is slowly moving closer to the Martian surface, "destined to crash into the planet in tens of millions of years."

RELATED: Total solar eclipse 2024: next eclipse to stretch from Mexico to Maine

Phobos is 157 times smaller than Earth’s moon. Deimos, Mars’ other moon, is even smaller, according to NASA.