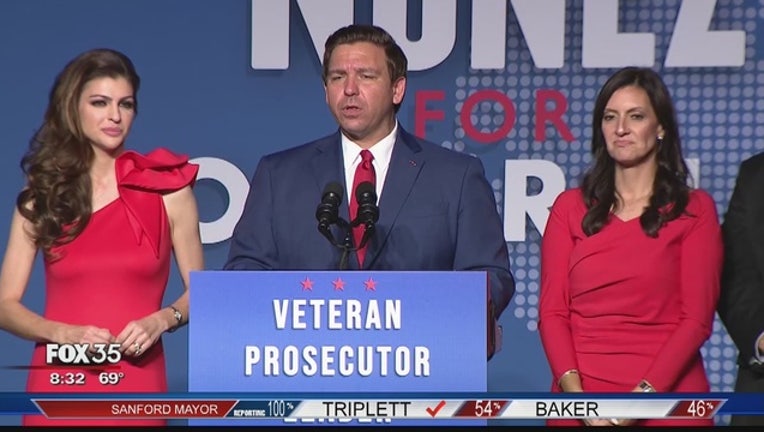 MIAMI (AP) - Ron DeSantis beat Andrew Gillum in the Florida governor's race with strong support from voters who ranked immigration, the economy or jobs as their No. 1 issue, according to a wide-ranging survey of the electorate.

AP VoteCast found that 8 in 10 voters who were most concerned about immigration voted for the Republican DeSantis. He won 6 of 10 votes from those ranking the economy and jobs their top issue.

As voters cast ballots for governor, U.S. Senate and members of Congress in Tuesday's elections, here's a snapshot of who voted and why in Florida, based on preliminary results from AP VoteCast. The innovative nationwide survey of about 139,000 voters and nonvoters - including 3,744 voters and 679 nonvoters in the battleground state of Florida - was conducted for The Associated Press by NORC at the University of Chicago.

DeSantis, a former U.S. representative, ran a largely negative campaign and accused Gillum of corruption as mayor of Tallahassee. President Donald Trump visited Florida twice in the final six days of the election to help build turnout for DeSantis.

Gillum was seeking to become Florida's first black governor. He lost despite having the support of 6 in 10 voters under the age of 45.

Republican Gov. Rick Scott declared victory over three-term Democratic Sen. Bill Nelson, likely ending the political career of one of Florida's longest serving officeholders. The Associated Press had not yet called the race. Scott's lead was less than a percentage point.

Scott's apparent win is a minor upset, as he was trailing in most polls leading up to Election Day. The wealthy former hospital executive, who entered politics as part of the 2010 tea party movement, poured $60 million of his own money into the race. He was urged to run by Trump.

Nelson did not publicly concede. Shortly after midnight, his chief of staff took the stage with about a dozen supporters still left and declared Scott the winner based on numerous news media reports. He said Nelson would make a statement later Wednesday and declined to take any questions.

The two have clashed sharply on gun violence, a big issue in Florida following the February shootings at Marjory Stoneman Douglas High School. Nelson has stressed that he favors a ban on military-style assault weapons and implementing a comprehensive system of background checks. Scott signed legislation in Florida that requires anyone wanting to buy a gun to be 21 years old, but the bill didn't include a ban on assault weapons.

Voters considered several issues to be important to their vote in this midterm election, including health care (one quarter), immigration (one quarter), the economy (2 in 10), gun policy (1 in 10) and the environment (1 in 10).

Nearly 8 in 10 voters who considered immigration the top issue favored Scott; by contrast, three-quarters of voters who said health care was most important preferred Nelson."

"Gun violence prevention is such an important issue to me," said Adam Alhanti, a student at Stoneman Douglas High when a shooting massacre occurred in February. "There are so many things that we need to take charge of, and we can really make a difference, not just in our nation, but right down to our local communities with who represents us in office."

Most Florida felons who have finished their sentences will be able to vote again in future elections. Voters approved Amendment 4, which says most felons will automatically have their voting rights restored when they complete their sentences or go on probation.

The amendment won support across most demographic groups in Florida. Support for the ballot was especially strong among liberal Democratic voters - roughly 9 in 10 supported. By contrast, just about half of conservative Republicans voted in favor. Among black voters, about 9 in 10 expressed support for the amendment.

STATE OF THE ECONOMY

Voters have a positive view of the nation's current economic outlook - two-thirds said the nation's economy is good, compared with one-third who said it is not good.

For a third of Florida voters, Trump was not a factor they considered while casting their votes. By comparison, a quarter said a reason for their vote was to express support for Trump, and 4 in 10 said they voted to express opposition to Trump.

Anjenys Gonzalez of Miami voted for Gillum and for the re-election of Nelson. She said Trump's endorsements of their opponents were factors in her decisions.

"I think his administration has done the exact opposite of upholding our democracy," she said. "Anybody he's endorsing clearly is in line with his policies."

Chaunce O'Connor, an Independent from Westchester, Florida, said Trump's endorsement of DeSantis for governor did not play any reason in his decision to vote for him.

"I don't judge a person by who they're influenced by," he said. "I judge them solely by their success and what their past is."

Tuesday's elections will determine control of Congress in the final two years of Trump's first term in office, and 7 in 10 percent of Florida voters said which party will hold control was very important as they considered their vote. Another 2 in 10 percent said it was somewhat important.

In Florida, two-thirds of registered voters who chose not to vote in the midterm election were younger than 45. A wide share of those who did not vote - 8 in 10 - did not have a college degree. About as many nonvoters were Democrats (one third) as Republicans.

AP VoteCast is a survey of the American electorate in all 50 states conducted by NORC at the University of Chicago for The Associated Press and Fox News. The survey of 3,744 voters and 679 nonvoters in Florida was conducted Oct. 29 to Nov. 6, concluding as polls close on Election Day. It combines interviews in English or Spanish with a random sample of registered voters drawn from state voter files and self-identified registered voters selected from opt-in online panels. Participants in the probability-based portion of the survey were contacted by phone and mail, and had the opportunity to take the survey by phone or online. The margin of sampling error for voters is estimated to be plus or minus 2.0 percentage points. All surveys are subject to multiple sources of error, including from sampling, question wording and order, and nonresponse. Find more details about AP VoteCast's methodology at http://www.ap.org/votecast .