Man plays with tiger that is still missing in Houston

Video has been released of a man playing with a tiger that hasn't been seen since video of it walking the streets of a Houston neighborhood went viral.

HOUSTON - New video provided by Victor Cuevas’ attorney shows the man accused of roaming with India, the Bengal tiger seen outside a west Houston neighborhood in a different light.

The video shows the tiger, named India, rolling around on the floor and playing tug of war with Cuevas in a seemingly empty living room. 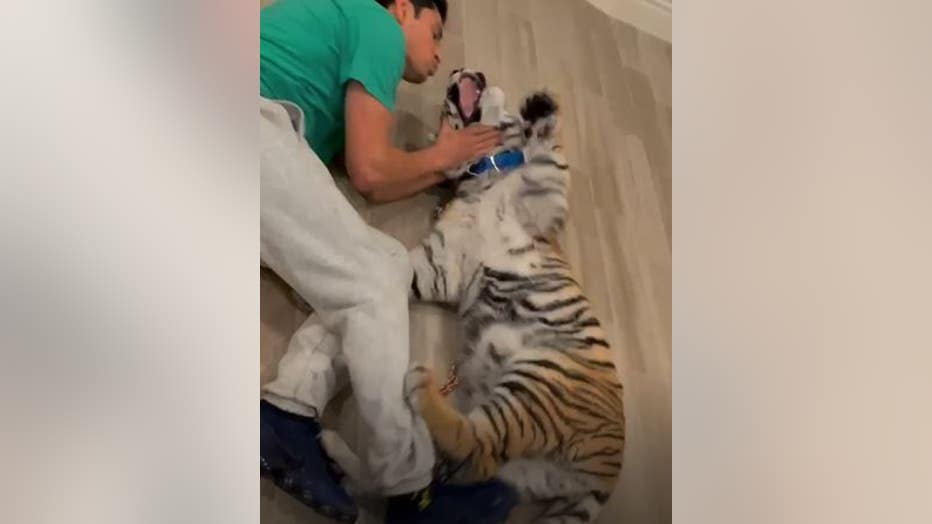 Other photos also provided by Michael Elliott, Cuevas’ attorney show a close bond with India, however, the attorney claims the tiger does not belong to him.

"HPD chose the easy way out and just made a whole lot of assumptions," Cuevas' attorney Michael Elliot said Wednesday. "They saw my client go out in the yard and retrieve a tiger. And from there they’ve assumed he's done a whole lot of different things that he necessarily has not done and is not guilty of. Just like they assume that the tiger is his. It, of course, is not. We are working very hard to try to solve this riddle because HPD has not been interested in doing it."

In fact, one of the files given to FOX 26, shows a missing flyer report for the tiger saying the owner’s name is "Deandre" who also deals with other exotic animals.

And after Cuevas posted bond Wednesday for charges involving evading arrest, a judge in Fort Bend County reset his bond Friday evening putting him back into police custody.

However, the entire incident began after Houston police received a report on Sunday, May 9, about a tiger on Ivy Wall Drive near Riverlace Drive.

Prior to officers' arrival, video shows the tiger walking in front of a house. Cellphone video also shows an off-duty deputy confronting the tiger. The deputy then can be seen with his gun out, but he never fires.