Officer pulls colleague out of careening vehicle's path in Virginia

Police in Virginia, released footage showing the moment a police officer pulled his colleague away from an out-of-control vehicle on Oct. 3, 2021. Credit - Gate City Police Department via Storyful

GATE CITY, Va. - Dramatic dashcam footage captured the quick reaction of a police officer in Virginia, who pulled a fellow officer out of the path of an out-of-control car and likely saved both of them from serious injuries.

The incident was reported Sunday in Gate City, located in southwestern Virginia near the Tennessee border. Officer Jessica McGraw was conducting an accident investigation on the southbound side of Highway 23 and was later joined by Officer Matthew Stewart, according to the Gate City Police Department.

Footage shared by the department shows the two officers talking on the side of the road next to a patrol vehicle when suddenly a white car on the northbound side loses control and crosses the median — slamming into the patrol vehicle.

"Officer Stewart caught a glimpse of the vehicle coming towards them and was able to react within a moment’s notice to grab McGraw and pull her out of the path of the spinning patrol car," Gate City Police Chief Justin Miller said in a statement shared Wednesday.

No serious injuries were reported. Stewart reported a minor injury, stating that his leg "went numb like I had a bad charley horse," according to the police department. 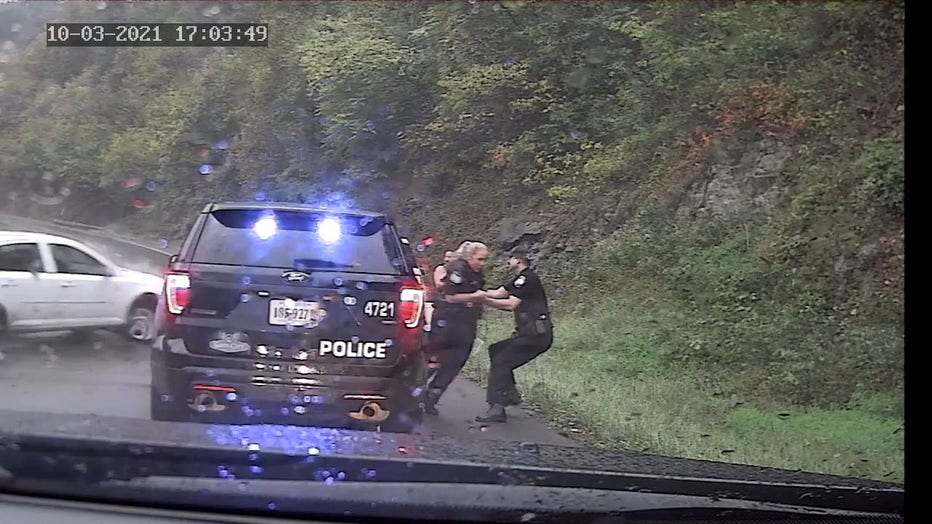 Both officers were expected to return to regular duty, the police department said.

"It is my belief the quick actions of Officer Stewart not only saved himself from serious bodily injury or death but also that of Officer McGraw," Miller said.

The driver of the white car was issued a citation for failure to maintain proper control of their vehicle.