Police in the UK released footage that shows a driver plowing into a toll booth and another car.

NORTON CANES, United Kingdom - Staffordshire police issued a warning Thursday about the dangers of driving while under the influence of drugs.

Officers released footage of a driver plowing into a toll booth and another car in August 2020. The car came in so fast, all four wheels had left the ground. The vehicle rotated roughly 90 degrees before slamming into the booth.

It came to a rest sitting on the driver’s side windows. Drivers sit on the right side in British cars.

Inspector Sion Hathaway said, "It is a miracle that no one was seriously injured." But police confirmed that the toll booth operator suffered injuries that she is still recovering from more than a year later.

"I hope that this footage presents a real warning to anyone who is thinking about getting behind the wheel in an intoxicated state," Hathaway said in a news release. "You not only risk your own life, but the lives of others." 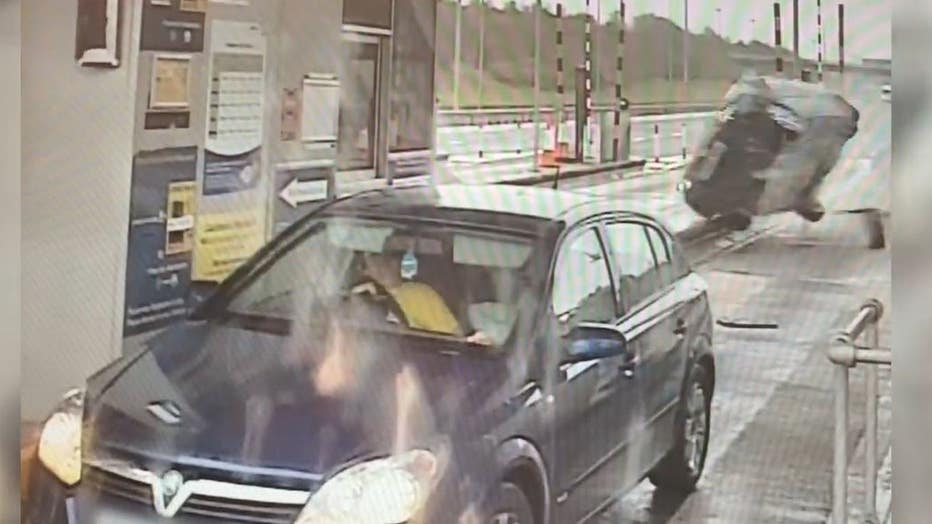 Police in the U.K. released footage that shows a driver plowing into a toll booth and another car. (Credit: Staffordshire Police via Storyful)

The suspect was later arrested and charged with dangerous driving. Swab samples taken from him revealed several controlled drugs in his system at the time of the crash.

Police said legal reasons prevent them from revealing the man’s name, but he was convicted and sentenced to 14 months in prison.

He also must serve an 18-months suspension, is disqualified from driving for three years, must take an extended re-test and must complete community service.