The price of regular gasoline on average across the U.S. hit an all-time high on Tuesday at $4.173, surpassing a record previously set in 2008, as the U.S. and British governments banned Russian oil imports.

Prices at the pump were rising long before Russia invaded Ukraine and have spiraled faster since the start of the war. The U.S. national average for a gallon of gasoline has soared over 45 cents a gallon in the past week, according to auto club AAA.

On Tuesday, California had the highest average price per gallon among U.S. states at $5.44, while Oklahoma was among the lowest at $3.719, according to AAA. More than half of U.S. states and Washington, D.C. were all charging over $4 per gallon for regular gas.

In addition to setting a new all-time high, the national average saw its largest-ever seven-day spike at 49.1 cents per gallon, topping the 49.0 cent weekly rise after Hurricane Katrina in 2005, according to GasBuddy, which tracks prices down to the service-station level.

The price is even higher in Europe, averaging 1.75 Euros per liter last week, according to the European Commission, the equivalent of $7.21 per gallon. 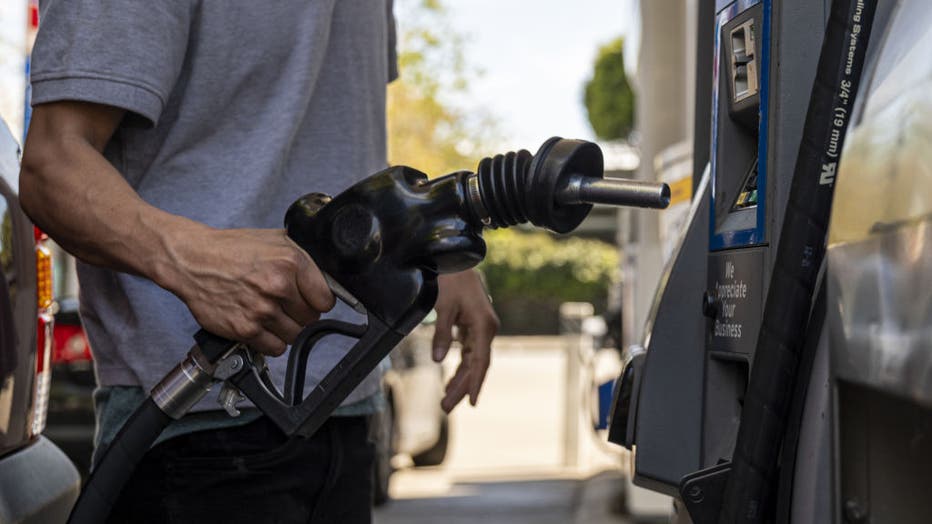 FILE - A driver returns a fuel nozzle to a gas pump at a Chevron gas station in San Francisco, California, U.S., on March 7, 2022. Credit: David Paul Morris/Bloomberg via Getty Images

Many gas price records have been broken amid Russia’s war on Ukraine, which has pushed Western countries to impose sanctions on Russia, curbing Russian exports of crude oil to the global market.

"Forget the $4 per gallon mark, the nation will soon set new all-time record highs and we could push closer to a national average of $4.50," said GasBuddy analyst Patrick De Haan. "We’ve never been in this situation before, with this level of uncertainty. ... Americans will be feeling the pain of the rise in prices for quite some time."

Energy prices are contributing to the worst inflation that Americans have seen in 40 years, far outpacing higher wages. Consumer prices jumped 7.5% in January, compared with a year earlier, and analysts predict a 7.9% increase when the government reports February figures later this week.

Oil prices soared early Monday before retreating. Benchmark U.S. crude surged to $130 a barrel overnight, then moderated to around $119, a 3% gain, in afternoon trading. The international price skyrocketed to $139 before falling back to about $123 a barrel. U.S. stocks tumbled, with the S&P 500 falling 3%, its biggest drop in 16 months.

Crude prices plummeted in early 2020 as economies around the world shut down because of COVID-19 — the price of futures even turned negative, meaning some sellers were paying buyers to take oil. Prices rebounded, however, as demand recovered faster than producers pulled oil out of the ground and inventories dried up.

Still, few forecasters saw this week's surge coming. Just a month ago, the Energy Department predicted oil would average around $80 a barrel this year. That was before Russia invaded Ukraine on Feb. 24.

The United States is the world's largest oil producer — ahead of Saudi Arabia and Russia — but it is also the biggest oil consumer, and it can't meet that staggering demand with domestic crude alone.

The U.S. imported 245 million barrels of oil from Russia last year — about 8% of all U.S. oil imports — up from 198 million barrels in 2020. That's less than the U.S. gets from Canada or Mexico but more than it imported last year from Saudi Arabia.

The increasingly violent Russian attack on Ukraine raised bipartisan calls to cut off Russia from the money it gets from oil and natural gas exports. Europe is heavily dependent on Russian gas.

"Russia is getting quite desperate, issuing massive discounts on their oil to attract buyers," De Haan said. "Russia is a significant producer... and suddenly with the loss of Russian oil, the balance has been significantly tipped in a way that we have never fully seen before."

President Joe Biden had been reluctant to ban Russian oil, fearing it could further fuel inflation heading into the midterm elections this November. But he announced Tuesday that the U.S. would ban all Russian oil imports, toughening the toll on Russia’s economy in retaliation for the invasion of Ukraine. He also acknowledged it will bring rising costs to Americans, particularly at the gas pump.

RELATED: What does a US ban on Russian oil accomplish?

The action followed Zelenskyy's plea to U.S. and Western officials to cut off the imports, which had been a glaring omission in the massive sanctions put in place on Russia over the invasion.

"We will not be part of subsidizing Putin’s war," Biden declared, calling the new action a "powerful blow" against Russia’s ability to fund the ongoing offensive.

Many Republicans and a growing number of Democrats in the House and Senate, including House Speaker Nancy Pelosi, D-Calif., had endorsed banning Russian crude as a way to put more pressure on Russian President Vladimir Putin to end the shelling of Ukraine. On Monday, a bipartisan group of committee chairmen reached an agreement on legislation to ban Russian oil imports and suspend normal trade relations status with Russia and its ally, Belarus — the latter move could lead to steep tariffs on other goods from the two countries.

A growing number of multinational businesses have cut Russia off from vital financial services in response to Western economic sanctions. The most recent big-name brands to suspend services in Russia are Netflix, the popular streaming service, and Estee Lauder, the New York-based cosmetics giant.