A dog was found shot in the face after being left alone to die on a street near Las Vegas on Sunday.

LAS VEGAS - A dog was found shot in the face after being left alone to die on a street near Las Vegas on Sunday.

Nevada Highway Patrol troopers responded to a scene where the dog, named Dudley, was bleeding from the mouth and had blood on his legs, FOX 5 Las Vegas reported, citing a new release from the agency. The people who abandoned Dudley left him with a blanket and a bowl of water that was already strained red with blood when a trooper arrived, according to the Las Vegas Review-Journal.

“It’s unthinkable that someone would do something like this to an animal,” Trooper Jason Buratczuk said, according to the paper.

“[They] just left him there to die,” Doug Avey, who initially found Dudley, told FOX 5.

Dudley was transported to The Animal Foundation, where veterinarians examined him and believed he was shot in the face, FOX 5 reported. 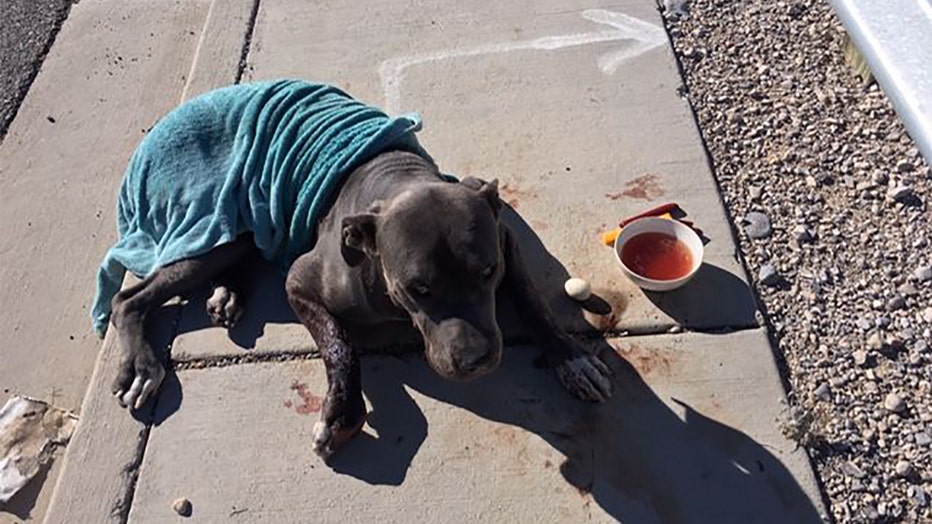 A dog named Dudley was found shot in the face, bleeding on a street, and left alone to die in Nevada on Sunday. (Photo: Nevada Highway Patrol)

Dr. Ken Sieranski, a veterinarian with The Animal Foundation, told the Review-Journal that Dudley is scheduled to have surgery Wednesday to remove bullet fragments and to adjust fractured teeth.

“We don’t know who the owner of this dog is,” Buratczuk said, according to the paper. “If (Dudley) was shot, this is a crime.”

Avey recalled to FOX 5 that he saw two cars with Dudley.

“I’m assuming the people dropping Dudley off sitting there,” Avey told the station. “I wasn’t sure what was going on. They were petting him on the head.”

When Avey returned an hour later, Dudley was still there, but the two cars were not, the report said.

“They were gone,” Avey said. “There was another car there and I stopped to see if [the driver] needed help. He told me as soon as he pulled up to help, the other cars sped off.”

Avey also told FOX 5 that the people left Dudley “a bowl of dirty water, two pieces of beef jerky and hard-boiled eggs, covered him in a blanket.”

The Highway Patrol described Dudley as “the sweetest dog,” who “loved all the attention and rubs he was getting,” the Review-Journal reported.

“The dog was completely calm, docile, a sweetheart in (the trooper’s) words,” Buratczuk said, adding that it appeared obvious that Dudley was someone’s pet, according to the paper.

Avey said he is in touch with the NHP and wants to adopt Dudley once he recovers, according to FOX 5.

A representative with the Animal Foundation told the station that the organization will prioritize Avey’s application.

“Animal cruelty is a felony in Nevada, and these perpetrators need to be brought to justice,” Buratczuk said Tuesday, according to the Review-Journal.