KYIV, Ukraine - There was a tense calm Monday in the Ukrainian capital of Kyiv, but explosions and gunfire were heard in embattled cities in eastern Ukraine as Russia's invasion met unexpectedly stiff resistance.

The Russian military assault on Ukraine went into its fifth day after Russian President Vladimir Putin ordered his nuclear forces put on increased alert, ratcheting up tensions further. A Ukrainian delegation held talks Monday with Russian officials at the border with Belarus, though they ended with no immediate reports of any agreements. French President Emmanuel Macron spoke by phone with Putin, urging him to halt the offensive.

Meanwhile, Western sanctions triggered by the invasion sent the Russian ruble plummeting, leading ordinary Russians to line up at banks and ATMs.

What's happening on the ground in Kyiv?

Kyiv's outgunned but determined troops slowed Russia’s advance and held onto the capital and other key cities — at least for the time being.

U.S. officials say they believe the invasion has been more difficult than the Kremlin envisioned, though that could change as Moscow adapts. The British Defense Ministry said Monday that the bulk of Putin’s forces were 30 kilometers (20 miles) north of Kyiv.

Long lines formed outside Kyiv supermarkets Monday as residents were allowed out of bomb shelters and homes for the first time since a curfew was imposed Saturday. Some found food but others didn't.

Hundreds of thousands of civilians have have sought safety at night in Kyiv's subway system and other makeshift shelters around the country, where parents try to calm their children's fears.

Despite the shortages, lack of privacy and other challenges, Ukrainians were trying to put on a brave face.

"It’s much harder for soldiers at the front. It’s embarrassing to complain about the icy floor, drafts and terrible toilets," said 74-year-old Irina, who sought safety in a Kyiv underground station and would not give her last name. Her grandson Anton is among those fighting in eastern Ukraine.

Ukrainian authorities said at least 44 people have been wounded in fighting in Ukraine’s second-largest city of Kharkiv, and that seven of them died in the hospital. The state emergencies agency said the casualties could still go higher because the damage from Monday’s shelling of residential areas is still being assessed.

U.N. human rights chief Michelle Bachelet said her office has confirmed that 102 civilians, including seven children, have been killed in the Russian invasion and 304 others wounded in Ukraine since Thursday. She cautioned that the tally was likely a vast undercount. 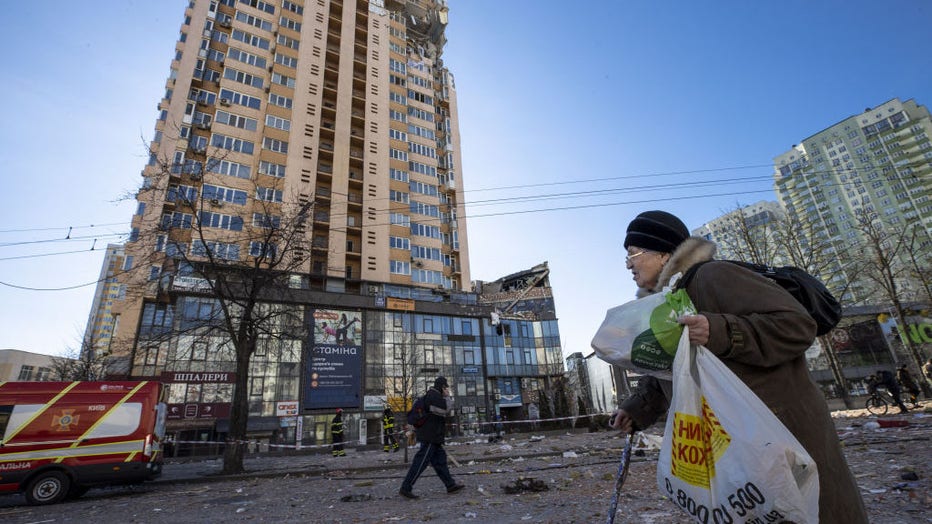 A woman walks past a damaged building after curfew temporarily lifted amid Russian attacks in Kyiv, Ukraine on Feb. 28, 2022. (Photo by Aytac Unal/Anadolu Agency via Getty Images)

Is there any chance for diplomacy?

That's hard to tell. Ukrainian and Russian delegations met Monday on Ukraine’s border with Belarus. The meeting ended with no immediate reports of agreements, but Mykhailo Podolyak, a top advisor to Ukrainian President Volodymyr Zelenskyy, said further talks could take place "in the near future."

Before the meeting, Zelenskyy’s office said Ukraine would demand an immediate ceasefire.

While Ukraine sent its defense minister and other top officials, the Russian delegation was led by Putin’s adviser on culture — Vladimir Medinsky — an unlikely envoy for ending the war and a sign of how Moscow viewed the talks.

Medinsky said the sides "found certain points on which common positions could be foreseen." He also said the talks would continue in the coming days on the Polish-Belarusian border.

Western officials believe Putin wants to overthrow Ukraine’s government and replace it with a regime of his own, reviving Moscow’s Cold War-era influence. His comments Sunday raised fears that the invasion of Ukraine could lead to nuclear war, whether by design or mistake.

On Monday afternoon, Macron spoke by phone with Putin for 90 minutes, according to the French presidency. It said that Putin expressed his "will to commit" to stopping all strikes against civilians and residential areas and to preserving civilian facilities. Macron asked him to end the military offensive in Ukraine and reaffirmed the need for an "immediate ceasefire."

Does Ukraine want to join the European Union?

In a move sure to antagonize the Kremlin, Zelenskyy signed an application Monday asking that Ukraine be allowed to join the 27-nation European Union.

He posted photos online of himself signing the application, and his office said the paperwork was on its way to Brussels, where the EU is headquartered. The move was largely symbolic, as Ukraine is very far from reaching the EU's membership standards, and the bloc is expansion-weary and unlikely to take on new members anytime soon.

What's going on with the United Nations?

The U.N.’s two major bodies — the 193-nation General Assembly and the more powerful 15-member Security Council — were holding separate meetings Monday. The Security Council gave a green light Sunday for the first emergency session of the General Assembly in decades. It will give all U.N. members an opportunity to speak about the war Monday and vote on a resolution later in the week.

How many people have fled Ukraine?

Filippo Grandi, the United Nations' High Commissioner for Refugees, tweeted that more than 500,000 people have fled Ukraine for neighboring countries since Russia's invasion started on Thursday. 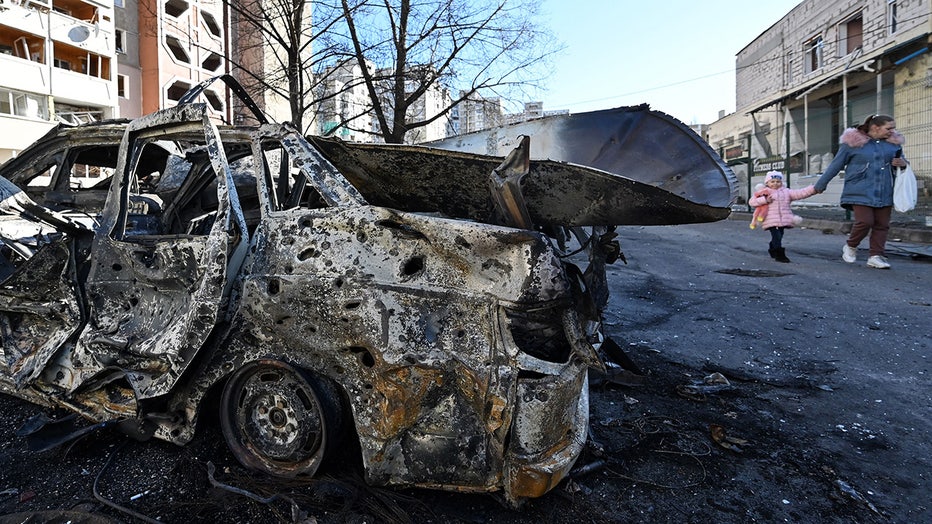 A view of the car which was destroyed by recent shelling in Kyiv outskirts on February 28, 2022. (Photo by GENYA SAVILOV/AFP via Getty Images)

What about the economic fallout of the invasion?

The Russian currency plunged about 30% against the U.S. dollar on Monday after Western nations moved to block some Russian banks from the SWIFT international payment system and to restrict Russia’s use of its massive foreign currency reserves. The ruble later recovered ground after swift action by Russia’s central bank. The Moscow stock exchange was closed all day.

The U.S. Treasury Department announced new sanctions targeting the Russian central bank and state investment funds. It said the move effectively immobilizes any assets of Russia's central bank in the United States or held by Americans.

The president of neutral Switzerland said his country would adopt the EU's sanctions targeting Russians, including asset freezes, all but depriving well-heeled Russians of access to one of their favorite safe havens to park money.

In Russia, people have been flocking to banks and ATMs for days, seeking to exchange rubles for dollars or euros, with reports on social media of long lines and machines running out.

Economists and analysts said a sharp devaluation of the ruble would mean a drop in the standard of living for the average Russian. Kremlin spokesman Dmitry Peskov described the new sanctions as "heavy," but argued Monday that "Russia has the necessary potential to compensate the damage."

Speaking at a meeting with top officials that focused on Western sanctions, Putin denounced the U.S. and its allies as an "empire of lies." He described Western allies as U.S. "satellites which humbly fawn on it, kowtow to it, copy its conduct and joyfully accept the rules it offers to follow."

The Russian military said its nuclear deterrent forces have been put on high alert in line with Putin’s order on Sunday.

Defense Minister Sergei Shoigu reported to Putin that command posts of all components of Russia’s nuclear forces have been beefed up with additional personnel.

The Defense Ministry said the high alert status applies to all components of Russian nuclear forces — the Strategic Missile Forces that oversee land-based intercontinental ballistic missiles, the Northern and Pacific Fleets that have submarine-launched intercontinental ballistic missiles; and long-range aviation, which has a fleet of nuclear-capable strategic bombers.

What are the impacts on travel?

Russia has closed its airspace to carriers from 36 nations, including European countries and Canada, responding in kind to their moves.

The decision, announced by the state aviation agency, follows a decision by the 27-nation EU and Canada to close their skies to Russian planes.

The agency said planes from those countries could only enter Russian airspace with special permission.