UKRAINE - The Ukrainian military released a video Thursday purportedly showing its forces blowing up a bridge ahead of advancing Russian troops.

The 13-second clip, which is shot in a first-person view, shows soldiers hiding behind a vehicle before an explosion on the road in front of them sends smoke rising into the air.

"Operators of the Special Operations Forces of the Armed Forces of Ukraine demonstrated skillful combat work, The bridge right in front of the column of Russian occupiers was blown up," Ukraine’s army said in a Facebook post. "To be continued... Let's win together!"

It was not immediately clear where the footage was taken. 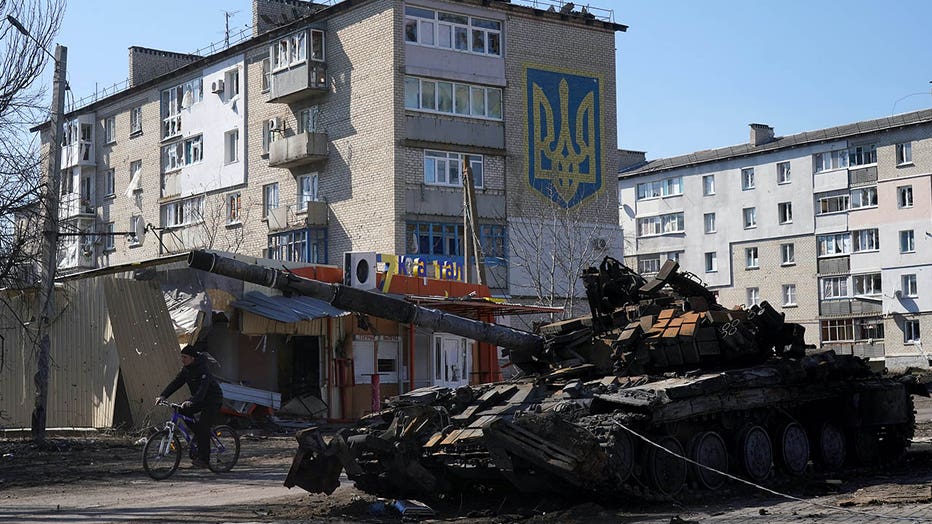 A damaged military vehicle is seen as civilians are evacuated along humanitarian corridors from the Ukrainian city of Mariupol under the control of Russian military and pro-Russian separatists, on March 21, 2022. (Photo by Stringer/Anadolu Agency via

In another post providing an update on fighting in Ukraine, the army said "the Russian enemy is trying to continue offensive operations in the Eastern Operational Zone in order to establish full control over the territory of Donetsk and Luhansk oblasts."

As of midday Thursday in Ukraine, Russia now controls 80% of the Luhansk region, the Associated Press is reporting, citing its governor.

But Ukraine’s army is saying that it is continuing to repel Russian attacks.

Russia-Ukraine War: Journalist in Ukraine checks in as Putin's war rages on

War in Ukraine continues with Russian troops attacking cities across the country. LiveNOW from FOX checks in with journalist Mark Savchuk in Kyiv, Ukriane on the latest updates.

"Nine enemy attacks have been repulsed in Donetsk and Luhansk oblasts over the past 24 hours, one tank, ten armored units and two vehicles, one artillery system, two special engineering units, an anti-aircraft missile system and an enemy ammunition depot have been destroyed," it said on Facebook.

"The Air Force of the Armed Forces of Ukraine has hit four air targets in the previous day: three unmanned aerial vehicles and one cruise missile," the military added.

Get the latest updates on this story on FOXNews.com.