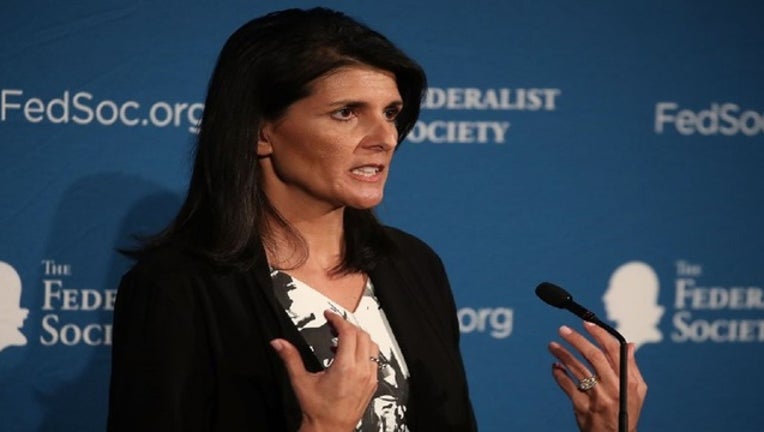 It will be a Cabinet-level position, and Haley has accepted.

"Governor Haley has a proven track record of bringing people together regardless of background or party affiliation to move critical policies forward for the betterment of her state and our country," Trump said in a release Wednesday. "She is also a proven dealmaker, and we look to be making plenty of deals. She will be a great leader representing us on the world stage."

Haley, an outspoken Trump critic throughout much of the presidential race, would become his first female — and first nonwhite — Cabinet-level official if confirmed by the Senate. She's the daughter of Indian immigrants and is the second Asian-American to serve as a U.S. governor.

"Our country faces enormous challenges here at home and internationally, and I am honored that the president-elect has asked me to join his team and serve the country we love as the next ambassador to the United Nations," Haley said in Trump's release.

Not all presidents have treated the ambassadorship to the U.N. as a Cabinet-level position, and Republicans have tended not to grant that status.

After secretary of state — a job Trump has not yet filled — the ambassadorship is highest-profile diplomatic position, often serving as the voice for U.S. positions on the international stage. As part of the Cabinet, Haley would have more opportunity to shape U.S. policies, rather than simply defend the administration's positions.

Yet it could be an awkward role at times. Trump campaigned on the theme of "America first" and said he is skeptical about "international unions that tie us up and bring America down." Trump has also described the United Nations as weak and incompetent.

Haley would be the third consecutive female U.S. ambassador to the United Nations, after Susan Rice and Samantha Power, the current ambassador.

Haley's new job clears the way for Lt. Gov. Henry McMaster to step into the role of South Carolina governor. McMaster was an early Trump endorser, backing him before the state's GOP primary in February.

At the time, Haley campaigned for Florida Sen. Marco Rubio, before going on to support Texas Sen. Ted Cruz.

Bad blood between Trump and Haley was evident in interviews and on social media. "The people of South Carolina are embarrassed by Nikki Haley!" Trump wrote on Twitter in March. Haley denounced several of Trump's campaign comments and urged voters to "reject the siren call of the angriest voices."

Still, Haley met with the president-elect last week at Trump Tower. Afterward, she said they'd had a "very nice" conversation.

A week ago while meeting with other Republican governors in Orlando, Haley described herself as "giddy" over the prospect of joining the Trump administration. She said she was heartened by his tone and inclusiveness after winning the election. "I hope he continues to do that, and I hope he continues to be disciplined in his comments."

Trump is spending Thanksgiving with his family at his Mar-a-Lago estate in Palm Beach, Florida.