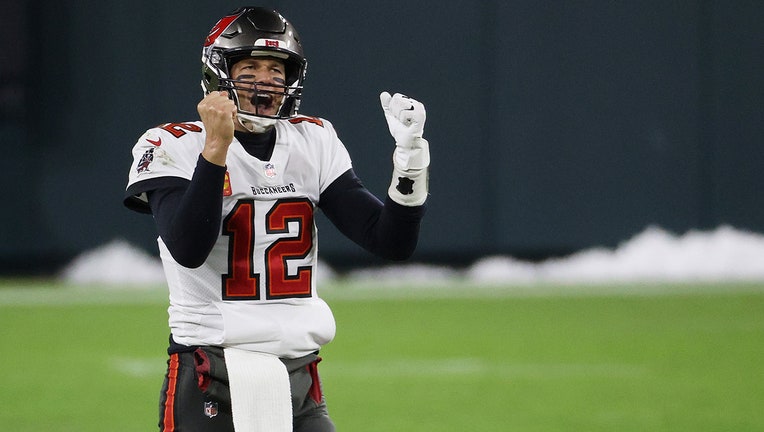 Tom Brady celebrates in the final seconds of their 31 to 26 win over the Green Bay Packers during the NFC Championship game (Photo by Dylan Buell/Getty Images).

Fresh of his seventh Super Bowl title, the Tampa Bay Buccaneers quarterback took to Twitter Monday to try "something new here" and share what he said was his cellphone number.

"Hey what’s up everyone, so this is a real first for me, but I’ve been talked into giving out my cellphone on the internet," Brady said in a video posted to his account. "So listen, rule number one, before we get into any of this, no texting on game days."

Brady said sharing his number will be a tool that will allow him to communicate more directly with his fans and followers, "where we can actually do a better job of responding to you and your questions and all the great messages."

"Sometimes it gets hard to sort through the ‘you suck, Brady’ in the comments. I know there’s quite a few of those over the years. It’s usually from the [New York] Jet fans," Brady said.

However, an automatic response after texting the number reads: "What's up! Yes, this is actually Tom Brady. This message is automated but everything else will come directly from me, on my phone. Click the link and add yourself so you're in my contacts."

Brady, who is set to turn 44 in August, has said he intends to play football until at least 45. He agreed to a cap-friendly contract extension with the Buccaneers last week, which will keep him playing through the 2022 season, reports say.

"In pursuit of 8...LFG @Buccaneers we’re keeping the band together," he tweeted.