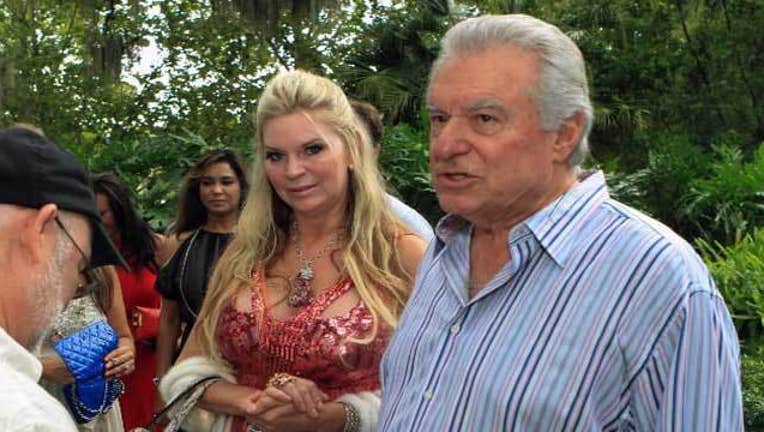 Jacqueline and David Siegel arrive at the Enzian for a private viewing of "The Queen of Versailles," a documentary about their family life in Maitland, Fla., on Friday, August 17, 2012. [Credit: Joshua C. Cruey, Orlando Sentinel]

Timeshare mogul and "King of Versailles" himself, David Siegel, has threatened layoffs should President Barack Obama win a second term.

The Central Florida billionaire, who is president and CEO of Orlando-based Westgate Resorts, sent a letter to his "valued employees," explaining that, should Obama be re-elected, "you can find me in the Caribbean sitting on the beach, under a palm tree, retired, and with no employees to worry about."

Siegel's wife, Jackie, is the star of the documentary "Queen of Versailles," which details the ongoing construction of the couple's 90,000 square-foot, $100 million Windermere home.

Siegel's company employs over 10,000 people worldwide with approximately 8,000 in Central Florida, making it one of the area's largest private employers, as reported by the Orlando Sentinel.

Below is the full text of the letter sent to employees which was emailed to FOX 35 by Siegel:

To All My Valued Employees,

As most of you know our company, Westgate Resorts, has continued to succeed in spite of a very dismal economy.   There is no question that the economy has changed for the worse and we have not seen any improvement over the past four years.   In spite of all of the challenges we have faced, the good news is this: The economy doesn't currently pose a threat to your job. What does threaten your job however, is another 4 years of the same Presidential administration.  Of course, as your employer, I can't tell you whom to vote for, and I certainly wouldn't interfere with your right to vote for whomever you choose.  In fact, I encourage you to vote for whomever you think will serve your interests the best.

However, let me share a few facts that might help you decide what is in your best interest.   The current administration and members of the press have perpetuated an environment that casts employers against employees. They want you to believe that we live in a class system where the rich get richer, the poor get poorer.  They label us the "1%" and imply that we are somehow immune to the challenges that face our country.  This could not be further from the truth.  Sure, you may have heard about the big home that I'm building.  I'm sure many people think that I live a privileged life.  However, what you don't see or hear is the true story behind any success that I have achieved.

I started this company over 42 years ago.   At that time, I lived in a very modest home.  I converted my garage into an office so I could put forth 100% effort into building a company, which by the way, would eventually employ you. We didn't eat in fancy restaurants or take expensive vacations because every dollar I made went back into this company.  I drove an old used car, and often times, I stayed home on weekends, while my friends went out drinking and partying. In fact, I was married to my business -- hard work, discipline, and sacrifice. Meanwhile, many of my friends got regular jobs. They worked 40 hours a week and made a nice income, and they spent every dime they earned.  They drove flashy cars and lived in expensive homes and wore fancy designer clothes. My friends refinanced their mortgages and lived a life of luxury. I, however, did not. I put my time, my money, and my life into this business ---with a vision that eventually, some day, I too, will be able to afford to buy whatever I wanted. Even to this day, every dime I earn goes back into this company.  Over the past four years I have had to stop building my dream house, cut back on all of my expenses, and take my kids out of private schools simply to keep this company strong and to keep you employed.

Just think about this – most of you arrive at work in the morning and leave that afternoon and the rest of your time is yours to do as you please.  But not me- there is no "off" button for me. When you leave the office, you are done and you have a weekend all to yourself. I unfortunately do not have that freedom.  I eat, live, and breathe this company every minute of the day, every day of the week. There is no rest. There is no weekend. There is no happy hour. I know many of you work hard and do a great job, but I'm the one who has to sign every check, pay every expense, and make sure that this company continues to succeed.  Unfortunately, what most people see is the nice house and the lavish lifestyle. What the press certainly does not want you to see, is the true story of the hard work and sacrifices I've made.

Now, the economy is falling apart and people like me who made all the right decisions and invested in themselves are being forced to bail out all the people who didn't. The people that overspent their paychecks suddenly feel entitled to the same luxuries that I earned and sacrificed 42 years of my life for. Yes, business ownership has its benefits, but the price I've paid is steep and not without wounds. Unfortunately, the costs of running a business have gotten out of control, and let me tell you why: We are being taxed to death and the government thinks we don't pay enough. We pay state taxes, federal taxes, property taxes, sales and use taxes, payroll taxes, workers compensation taxes and unemployment taxes.  I even have to hire an entire department to manage all these taxes. The question I have is this: Who is really stimulating the economy? Is it the Government that wants to take money from those who have earned it and give it to those who have not, or is it people like me who built a company out of his garage and directly employs over 7000 people and hosts over 3 million people per year with a great vacation?

Obviously, our present government believes that taking my money is the right economic stimulus for this country. The fact is, if I deducted 50% of your paycheck you'd quit and you wouldn't work here.  I mean, why should you?  Who wants to get rewarded only 50% of their hard work?  Well, that's what happens to me.

Here is what most people don't understand and the press and our Government has chosen to ignore – to stimulate the economy you need to stimulate what runs the economy. Instead of raising my taxes and depositing that money into the Washington black-hole, let me spend it on growing the company, hire more employees, and generate substantial economic growth. My employees will enjoy the wealth of that tax cut in the form of promotions and better salaries. But that is not what our current Government wants you to believe. They want you to believe that it somehow makes sense to take more from those who create wealth and give it to those who do not, and somehow our economy will improve.  They don't want you to know that the "1%", as they like to label us, pay more than 31% of all the taxes in this country.  Thomas Jefferson, the author of our great Constitution, once said, "democracy" will cease to exist when you take away from those who are willing to work and give to those who would not."

Business is at the heart of America and always has been. To restart it, you must stimulate business, not kill it. However, the power brokers in Washington believe redistributing wealth is the essential driver of the American economic engine. Nothing could be further from the truth and this is the type of change they want.

So where am I going with all this? It's quite simple. If any new taxes are levied on me, or my company, as our current President plans, I will have no choice but to reduce the size of this company. Rather than grow this company I will be forced to cut back.  This means fewer jobs, less benefits and certainly less opportunity for everyone.

So, when you make your decision to vote, ask yourself, which candidate understands the economics of business ownership and who doesn't? Whose policies will endanger your job? Answer those questions and you should know who might be the one capable of protecting and saving your job. While the media wants to tell you to believe the "1 percenters" are bad, I'm telling you they are not. They create most of the jobs.  If you lose your job, it won't be at the hands of the "1%"; it will be at the hands of a political hurricane that swept through this country.

You see, I can no longer support a system that penalizes the productive and gives to the unproductive. My motivation to work and to provide jobs will be destroyed, and with it, so will your opportunities. If that happens, you can find me in the Caribbean sitting on the beach, under a palm tree, retired, and with no employees to worry about.