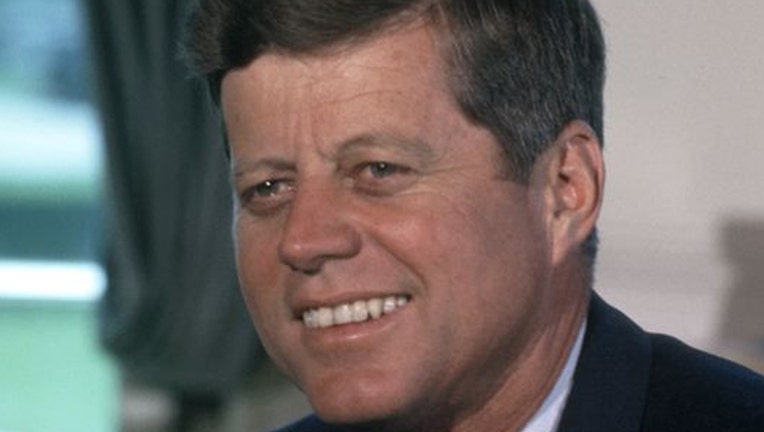 BOSTON (AP) — Americans turned out by the thousands Monday to celebrate the life and legacy of President John F. Kennedy on the day he would have turned 100.

The U.S. Postal Service commemorated Kennedy's centennial with a dedication of a JFK postage stamp in Brookline, a Boston suburb where he was born on May 29, 1917.

The image on the stamp is a 1960 photograph by Ted Spiegel of Kennedy when he was campaigning for president in Seattle. Boston Postmaster Nick Francescucci said the stamp was selected because of the way Kennedy was looking up.

"His eyes were high, they were looking to the sky (and) it looked like there was a big bright future ahead of us," Francescucci said.

Democratic U.S. Rep. Joe Kennedy III gave the keynote speech at the John Fitzgerald Kennedy National Historic Site — JFK's birthplace and childhood home. His great-uncle, he said, was a man who had honest and infectious pride. He not only implored a generation to serve, but he promised them a country worthy of their service, the congressman said.

A wreath-laying ceremony also was held to honor the 35th U.S. president at his gravesite at Arlington National Cemetery in Virginia. Kennedy served as president from January 1961 until he was assassinated Nov. 22, 1963. He was 46.

In Boston, the John F. Kennedy Presidential Library and Museum held a birthday celebration that included a cake made by the family of the baker who made the engagement cake for then-Sen. Kennedy and Jacqueline Bouvier, museum officials said. The celebration capped a long Memorial Day holiday weekend of events to honor Kennedy's legacy and drew thousands of visitors on his centennial celebration.

"There's no one issue or one event that we could do to highlight the different facets of (Kennedy),"said Steven Rothstein, the library foundation's executive director. "Many of his key ideas are timeless. We fundamentally believe that JFK is a visionary who never goes out of style."

The late president's commitment to service also was celebrated at a Saturday ceremony co-hosted by the National Peace Corps Association. Association president Glenn Blumhorst said those who have served in the Peace Corps see themselves as "the living legacy of JFK."

Kennedy issued an executive order establishing the Peace Corps in 1961.

"His call to service in asking what we can do for our country is the way that we responded," Blumhorst said. "We feel that that is one way of completing our national service."