Governor DeSantis announced that a plan to reopen Florida will be announced on Wednesday.

WASHINGTON D.C. - Gov. Ron DeSantis on Tuesday said Florida has thousands of unused ventilators, prompting President Donald Trump to suggest some of the state’s breathing machines could be sent to other countries that need them during the coronavirus pandemic.

During a White House briefing, Trump said he may dip into Florida’s ventilator stockpile to help "not only our allies, but countries that need help."

The issue of ventilators came up when the governor defended Florida’s "measured" response to the pandemic, arguing that the state avoided "draconian orders" and fared better than other states.

"We’ve had people in the hospital, but I am now in a situation where I have less than 500 people in a state of 22 million on ventilators as of last night. And I have 6,500 ventilators that are sitting idle, unused around the state of Florida," the governor said.

Helen Aguirre Ferre, a spokeswoman for the governor, clarified that "approximately 6,000 ventilators" were not being utilized in the state as of Tuesday afternoon. Ventilators can play an important role in caring for people critically ill with COVID-19, the respiratory disease caused by the coronavirus.

Trump said it was "really interesting" that Florida has that many unused ventilators, noting that the state’s stockpile would come into use as he looks at sending ventilators to other countries like Italy, France, Spain and Nigeria. 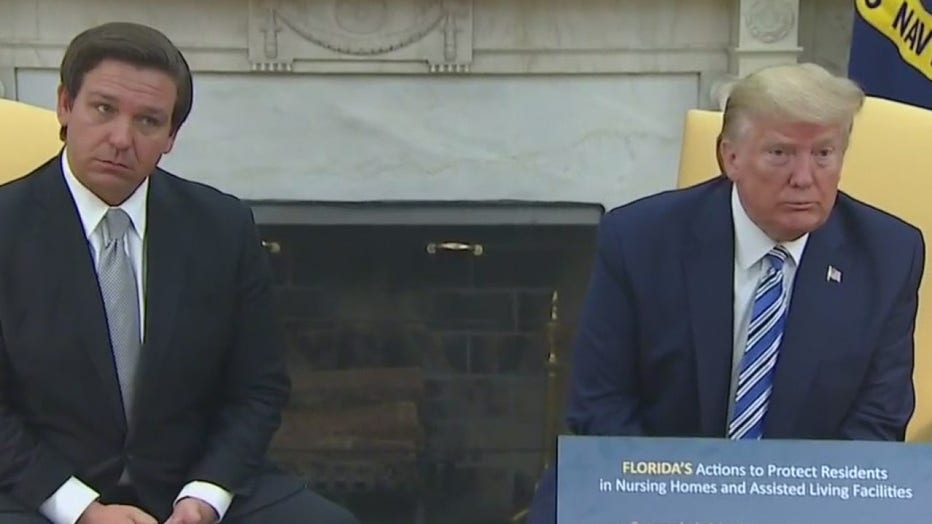 "I spoke today to Nigeria, they’ll do anything for ventilators. We’re going to send at least 200 ventilators to Nigeria, probably more than that," Trump said.

DeSantis, a staunch political ally of the president, also used the national spotlight to recast doubt about New York’s demand for tens of thousands of ventilators in late March.

At that time, Gov. Andrew Cuomo was escalating New York’s response to the pandemic and had requested about 40,000 respiratory devices for hospitals. Trump said he did not believe the state needed that many devices during a Fox News’ interview.

On Tuesday, DeSantis said he told Jared Kushner, the president’s son-in-law, in March that he also did not believe New York needed that many ventilators because Florida did not need any ventilators during the same time period.

"When everybody was talking about 40,000 ventilators in New York, I am in contact with Jared about Florida, and he was saying that they (New York) are not going to need that (40,000 ventilators). I was like, look I actually agree with your numbers, I don’t think we need any ventilators in Florida right now --- maybe things will change," DeSantis said.

The governor’s comment on New York, prompted Trump to say DeSantis has been "great" in handling the coronavirus pandemic and is a "good example" of a partnership between state and federal governments.

As DeSantis prepares to release plans for reviving the state’s economy on Wednesday, he acknowledged that he still has concerns about coronavirus outbreaks resurfacing in the summer and fall.

"This is a novel virus. It is unpredictable. But we are in a situation now where we have so many more tools to be able to attack," the governor said, adding that any announcements on reopening the economy will continue to include measures to protect the most vulnerable people in the state.