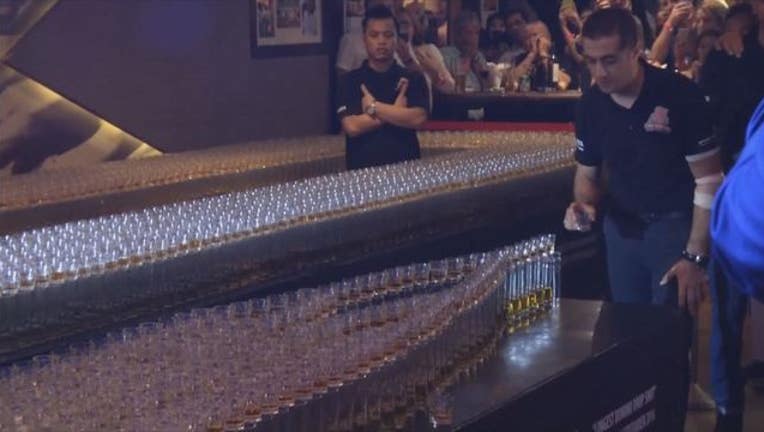 DUBAI, United Arab Emirates (AP) - The 6,148 whiskey shots perched atop glasses of energy drink waited for the push that might send them tumbling into the record books — just another night in Dubai, and another chance to make a certain kind of history.

Superlatives like "the world's biggest" and "the world's first" are almost as ubiquitous as the skyscrapers and mega-projects that have come to define this city-state on the Arabian Peninsula, home to the tallest building and the busiest international airport on Earth.

With time, this largest-in-life approach has filtered down to more humble and odder pursuits — such as Monday night's attempt at the world's longest domino drop shot.

The current record holder for the longest drop is the Bahama-based location of the alcohol-soaked chain Señor Frog, which got 4,107 of its 4,109 shot glasses to fall correctly in February 2013.

On Monday, The Huddle Sports Bar & Grill in Bur Dubai sought to break the record. Staffers carefully set up over 6,000 glasses of Camros whiskey and Bazooka energy drink. It was an effort five months in the making, with tests twice a month that took 12 hours to set up.

"When you say Guinness World Record in Dubai, it's something everyone will talk about," said Ahmad Taher, the food and beverage manager at Citymax Hotels, which went for the record.

Such an event would be inconceivable in other Mideast countries like neighboring Saudi Arabia, where alcohol is illegal and officials are preparing for the annual hajj pilgrimage, required of all able-bodied Muslims once in their life.

But in Dubai, which has a large expatriate population and relatively lax rules on alcohol, the event is unlikely to draw much attention — unless, of course, they make it into the Guinness Book of World Records.

Before Monday, the United Arab Emirates held 165 such records, including 129 set in Dubai, according to Guinness.

Among them are the architectural marvels of Dubai, like the Burj Khalifa, the world's tallest building at 828 meters (2,716 feet), and the continent-shaped islands of The World, the largest man-made archipelago. The world's longest driverless metro line passes by the twin towers of the J.W. Marriott Marquis, the world's tallest hotel at 355 meters (1,165 feet).

Then there are the stranger feats, like when Indian national Maharoof Decibels won the Operation board game with surgical precision in a world-record 21.87 seconds in 2008. Or when Mohamed Ahmed al-Mulla, an Emirati, typed the fastest blindfolded Arabic text message in 2009. The two-sentences included the phrase: "the razor-toothed piranhas of the genera Serrasalmus and Pygocentrus."

Some records are more infamous. The largest tanker ship ever hijacked? The UAE-based Sirius Star, later released by Somali pirates for a $3 million ransom. The highest shortage of women, according to Guinness? The UAE, with its vast workforce of male, low-paid migrant laborers.

One place the UAE isn't ahead, however, is in the number of overall world records. The United States leads the pack with 6,874. But the UAE and Dubai dominate the Middle East, Guinness spokeswoman Leila Issa said.

"The UAE's initiative to be the first in all industries and their drive for success and to be the best is what drives them to attempt Guinness World Records titles," she said.

The Emirati push for world records corresponds with academic research on social comparison. Studies show that the higher ranked a person becomes in a field, "the more thirsty you are to get to that No. 1 position," said Stephen Garcia, an associate professor of psychology at the University of Michigan.

"Even with adults, if you say, 'First one to the tree is the coolest person in the world,' you're going to get the adults running to the tree," Garcia said. "That's such a childhood game, but people are ready to run with it. Whenever you create a competition, people tend to buy in, even around these trivial dimensions, like this Guinness World Record."

Garcia's lack of enthusiasm was nowhere to be seen at the Huddle on Monday, where the vibration of the speakers in the bar caused a premature drop of some of the shot glasses at around 8:45 p.m., to the horror of onlookers.

The same thing happened again at 10:09 p.m., but was stopped by a nimble-fingered bartender. Five minutes later, another fourth of the shots fell into their glasses before time, sending some workers scrambling to reset the glasses as others asked patrons in the noisy bar to be quiet.

But at 11:55 p.m., Taher pushed over the first glass, the smell of whiskey and energy drink filling the air as the glasses crashed into each other for 55 seconds. Two hours of counting later, Dubai had its 130th Guinness World Record with The Huddle's 4,578 correctly fallen shot glasses.