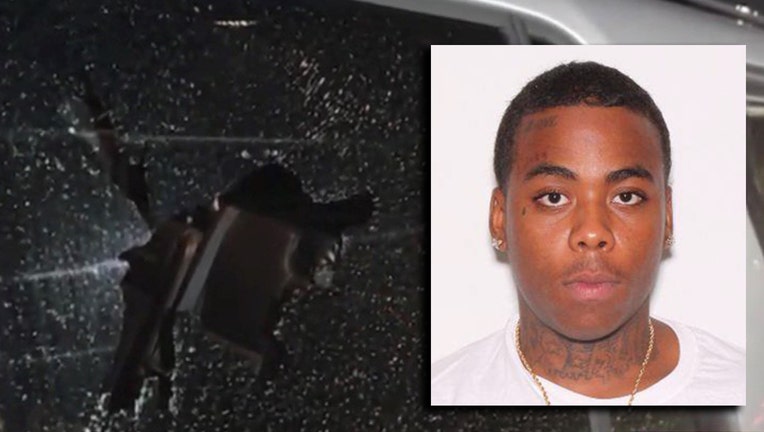 VOLUSIA COUNTY, Fla. - The Volusia County Sheriff's Office arrested a man suspected of shooting 19 vehicles on Interstate 4 and Interstate 95 with a BB gun back in January.

Deon Anthony Jones, 21, is charged with 19 counts of shooting into an occupied vehicle and felony criminal mischief. Deputies say Jones was already in custody on other charges in the Duval County Jail when detectives arrested him Tuesday.

Tiyana Anderson, 22, is believed to be the person who was driving at the time. She is wanted on principal charges in connection to each of Jones’ charges.

Deputies say on Jan. 1, they responded to several reports of shots fired at vehicles traveling along I-4 and I-95 in Volusia County.

RELATED: FHP locates vehicle possibly involved with gunfire that hit at least 19 vehicles along I-4, I-95

"Each of the victims’ vehicles had damage consistent with BB projectiles," the sheriff's office said in a press release. "Similar incidents were also reported across Seminole, Flagler, and St. Johns counties around the same timeframe."

One victim reported a tag number and suspect vehicle description to authorities.

"The tag reported in St. Johns was assigned to a vehicle registered to Jones’ grandparents, and that vehicle was soon located by FHP troopers in Jacksonville. There were BBs visible on the floorboard, and the passenger side mirror was broken in a way that appeared consistent with being shot by someone inside the vehicle."

Deputies say they were able to confirm that Jones used a BB gun to randomly shoot at 19 occupied vehicles while Anderson, drove. The total property damage was estimated at about $12,000.

Jones reportedly has a lengthy criminal history that includes armed robbery, possession of firearm by a convicted felon, and dealing in stolen property. He's being held on $100,000 bond.

As of this writing, Anderson is not in custody.