WASHINGTON, D.C. - The clock ran down at the end of the homecoming game and spectators stormed the football field, knocking over members of the high school band — all to gather around an assistant coach as he took a knee in prayer, surrounded by uniformed players.

Six years later, after losing his coaching job and repeatedly losing in court, that former Washington state coach, Joe Kennedy, will take his arguments before the U.S. Supreme Court on Monday, saying the Bremerton School District violated his First Amendment rights by refusing to let him continue praying at midfield immediately after games. Four conservative justices have already expressed concerns with how his case has been handled.

Kennedy’s effort to get his job back helped earn him an appearance at a 2016 Donald Trump rally and quickly became a cultural touchstone, pitting public school employees’ religious liberties against what his critics describe as longstanding principles separating church and state and protecting students from religious coercion.

Lawyers for the school district say officials had no problem letting Kennedy pray separately from students or letting him return to the field to pray after the students left. But allowing him to pray at midfield immediately after games with students there risked being seen as government endorsement of religion. 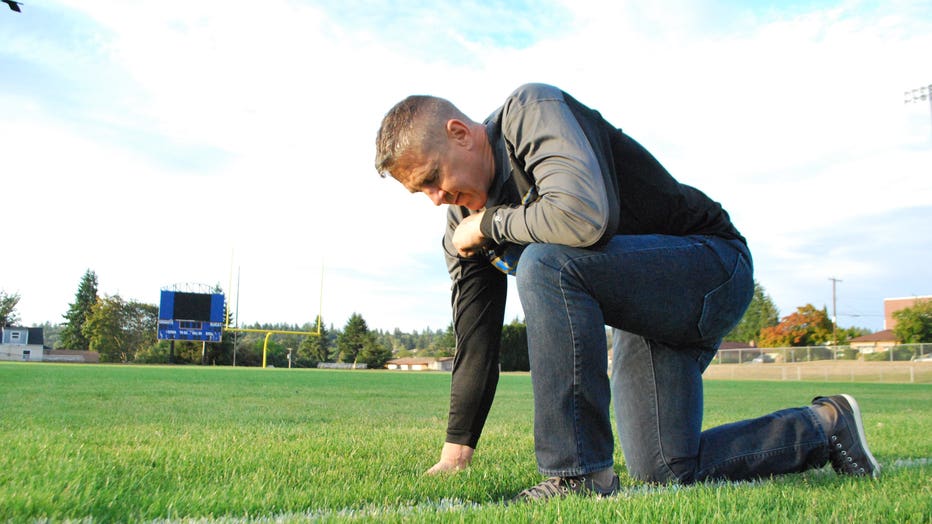 While Kennedy insists he never cared whether students participated in the prayers and he never asked them to join him, at least one player reported participating contrary to his own beliefs, for fear of losing playing time.

"This case is challenging well-established case law that has protected students’ religious freedom for decades, and that has been supported by conservative and liberal justices alike," said Rachel Laser, chief executive of Americans United for Separation of Church and State, which is representing the school district. "If the court rules the wrong way, teachers and coaches could pressure students to pray in every public school classroom across the country."

For Kennedy’s supporters, the 9th U.S. Circuit Court of Appeals’ holding in the case would force public school employees to drop their religious identities at the schoolhouse door — something they say the Constitution does not require.

"If a teacher prays over her lunch in the cafeteria and students can see her — just that little blessing over her salad — that’s enough to terminate that teacher, according to the school district," said Jeremy Dys, an attorney with First Liberty Institute, which is representing Kennedy.

Kennedy, a former Marine whose day job was at the Puget Sound Naval Shipyard, began coaching football at Bremerton High in 2008. He was new to religion and coaching, and said he was inspired by the movie "Facing the Giants" — about a Christian high school football coach — to give thanks to God "on the battlefield" after each game.

What began as a solitary practice soon attracted students. He agreed, citing the district’s policy of neither encouraging nor discouraging student prayer. Over the years he began leading locker room prayers before games, as well as group prayers and religious motivational talks at midfield after them.

The school district said it did not learn Kennedy was leading players in prayer until it heard it from another team’s coach in September 2015. Administrators told him he was not to participate in religious activities with students, and any of his own religious observation must be either non-demonstrative or should occur without students.

For a month, Kennedy complied, the district notes in arguments to the court: He prayed on his own, and the district let him be.

But Kennedy’s lawyers then insisted he be allowed to resume his prior practice, describing it as a "personal" prayer protected by the Constitution whether or not students joined him. Kennedy announced he would resume praying at midfield after games, and when he did so at the Oct. 16, 2015, homecoming game, as Bremerton’s players were otherwise occupied, spectators rushed to field to join him — as did members of the opposing team.

The district still did not fire Kennedy, but wrote to caution him. Given his prior statements and actions, his praying at midfield — on government property he could access only by virtue of his job — could be perceived as school endorsement of religion, exposing the district to potential liability, Superintendent Aaron Leavell wrote.

"I wish to again emphasize that the district does not prohibit prayer or other religious exercise by its employees," Leavell wrote. "However, it must prohibit any conduct by its employees that would serve as District endorsement of religion."

Kennedy prayed again on the field after the next two games: first at a varsity game where no one joined him, and then at a junior varsity game where he was joined by a state lawmaker. The district then placed him on leave, and his contract was not renewed.

The federal judge who ruled against Kennedy, District Judge Ronald Leighton, compared his postgame behavior to a director who comes to center stage and prays at the end of a school play: "A reasonable onlooker would interpret their speech from that location as an extension of the school-sanctioned speech just before it."

As the case made its way through the courts, Kennedy lost at every turn. But when the Supreme Court declined to take the case at an earlier stage, Justices Samuel Alito, Clarence Thomas, Neil Gorsuch and Brett Kavanaugh called the 9th Circuit’s reasoning "troubling" and said under it, "public school teachers and coaches may be fired if they engage in any expression that the school does not like while they are on duty."

Ninth Circuit Judge Milan Smith suggested a teacher who prays over lunch in a cafeteria doesn’t send a public message the way Kennedy did. Smith called the narrative posed by Kennedy’s lawyers — that this was about a public employee’s private prayer — "deceitful."

Kennedy said he just wants to get back to coaching.

"This thing has just been so blown out of proportion," he said. "Imagine a guy going out there and tying his shoe — you would never know the difference."