STOCKTON, Calif. - The Stockton police officer fatally shot Tuesday morning while responding to a domestic violence incident has been identified as Jimmy Inn.

Stockton, police dispatchers received a call around 9:45 a.m. reporting a domestic disturbance. The caller reported hearing screaming and seeing a woman wearing a ripped shirt and bleeding. She appeared to have been assaulted.

Inn arrived at the home at 10:07 a.m. and was shot almost immediately in front of the home by a male suspect, Jones said.

"It was a violent, blatant and very sudden assault on our police officer," said Stockton Police Chief Eric Jones. 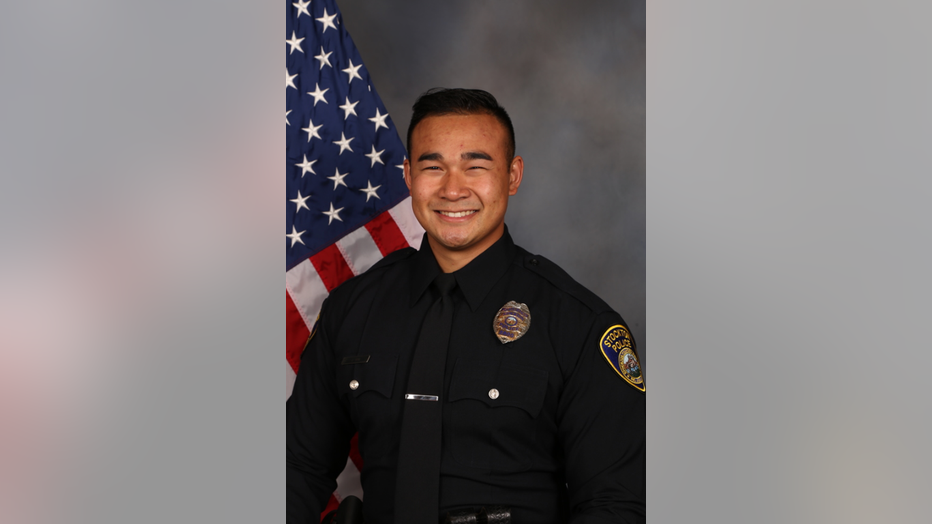 A second officer, whose name was not released, arrived and exchanged gunfire with the suspect. The suspect then went into the home and returned moments later holding a young child.

The suspect began to strangle the child, an 8-year-old boy, Jones said. The officer opened fire again as a bystander tackled the suspect.

The suspect’s name has not been released. He died at the hospital. It was not immediately clear what relationship he had with the woman and the child.

Inn, 30, is survived by his wife, who is also a Stockton police officer, as well as a 7-month old son, 12-year-old stepdaughter and a 14-year-old stepson.

He was hired by the police department in December 2015, Jones said.

Remembered as an optimistic officer who was popular in the department, Inn was assigned to the Field Operations Division and served in the honor guard.

Inn is the second law enforcement officer to be killed in California within 24 hours.

The deaths occurred during National Police Week, an annual event that honors law enforcement officers who were killed or disabled in the line of duty.