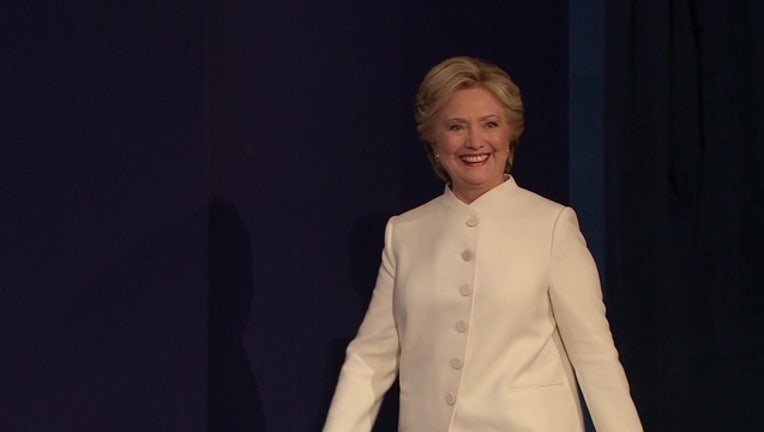 The final debate between Hillary Clinton and Donald Trump as the candidates met at the University of Nevada, Las Vegas.

NEW YORK (AP) — A midday advance on the stock market wilted in afternoon trading Friday after the FBI notified Congress that it will investigate new emails linked to Democratic presidential candidate Hillary Clinton.

The market had started out on a strong note after the government reported that the economy broke out of a slump in the third quarter and grew at the fastest pace in two years.

The early climb was led by industrial, energy and technology companies, which would stand to benefit most from a pickup in economy, but the gains disappeared after the FBI made its announcement at about 1 p.m. Eastern. Clinton has led in recent polls, and the surprise development added new uncertainty just a week and a half before the presidential election.

"I think the betting has to be that there's nothing too damning, but we don't know," said Brad McMillan, chief investment officer for Commonwealth Financial Network.

The Dow Jones industrial average closed down 8.49 points, less than 0.1 percent, at 18,161.19. The index was 80 points higher shortly before the new inquiry was disclosed, then went down as much as 74 points in the minutes that followed.

Health care companies took the biggest losses by far. Prescription drug distributor McKesson plunged to a three-year low after its revenue fell about $1.5 billion short of estimates. The company slashed its annual outlook because of weaker drug prices, and investors worried that McKesson and its rivals will compete by making bigger cuts in prices.

Drugmakers were pummeled on weak earnings. Amgen, the world's largest biotech drug company, reported solid results for the third quarter and raised its guidance. However the company also disclosed flat sales of the anti-inflammatory medication Enbrel, its top-selling drug. Enbrel will soon face more competition, which could hurt sales.

Health care stocks are the worst performing part of the market this year. They're down 6 percent while the S&P 500 is up 4 percent. Their performance compared to the rest of the market has gotten even worse over the last few months.

Earlier, stocks rose after the economy grew faster than expected during the third quarter. The Commerce Department said exports grew and more businesses restocked their shelves. In total, gross domestic product grew 2.9 percent, which was better than economists expected. Growth had slowed down late last year, causing worry among investors.

McMillan said he thinks the economy should keep growing at a similar pace for the next few quarters.

General Electric and oil and gas drilling services company Baker Hughes rose as they discussed a possible deal. GE said the discussions concern a partnership and that it doesn't intend to buy Baker Hughes outright. Baker Hughes tried to merge with competitor Halliburton two years ago, but the companies walked away from the combination after the federal government sued to block it. GE added 59 cents, or 2.1 percent, to $29.22 and Baker Hughes gained $4.57, or 8.4 percent, to $59.12.

Other industrial stocks including United Technologies, which makes products including jet engines and elevators, and manufacturer Honeywell also traded higher.

Amazon sank after its profit came up short of analysts' estimates. The company also released a weak outlook. The stock is trading at all-time highs and has surged more than 30 percent over the last 12 months. It fell $42.04, or 5.1 percent, to $776.32.

Bond prices edged higher. The yield on the 10-year Treasury note fell to 1.84 percent from 1.85 percent.

AP Markets Writer Marley Jay can be reached at http://twitter.com/MarleyJayAP His work can be found at http://bigstory.ap.org/journalist/marley-jay