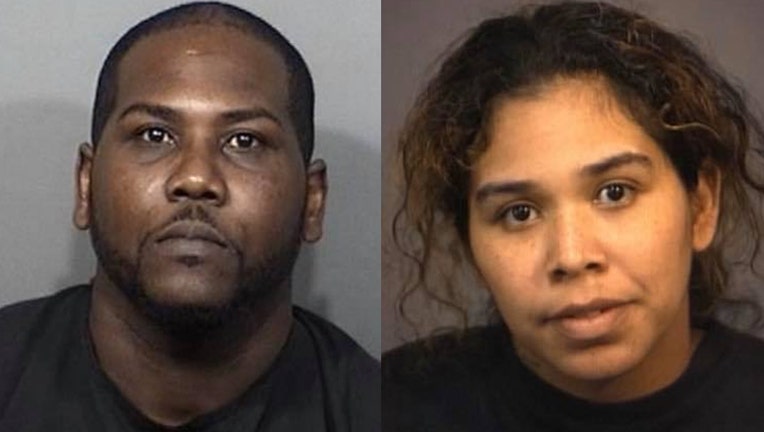 MELBOURNE, Fla. - Two people were arrested after they neglected a small dog so severely that the animal was lying in her own excrement, was covered in parasites and insects, suffered from hypothermia, had life-threatening anima, and was too weak to stand or walk, a Florida sheriff reported.

According to Sheriff Wayne Ivey, units arrested Michael Postell and Alicia Hayes of Melbourne on Wednesday on a warrant for animal cruelty that stemmed from a March of 2019 case.

He said that in March of 2019, Melbourne police officers responded to a home in reference to a report of an abused animal that was intentionally neglected and near death. The Brevard County Sheriff’s Animal Services and Enforcement Unit got involved as well.

The investigation reportedly discovered that a small bulldog mix named Sasha was being abused. She was found chained to a doghouse and was so weak that she was unable to stand or walk. She was also laying in her own excrement. Sheriff Ivey reported that vets said Sasha suffered from severe hypothermia with a body temperature of 91 degrees. She had life-threatening anima and was also covered in parasites and insects.

MORE NEWS: Florida man sentenced to one year in prison for beating puppy to death

Sasha's owners, Postell and Hayes, were said to be identified in the investigation but could not be located. Because of this, Sheriff Ivey said that the case was referred to the State Attorney’s Office with formal Animal Cruelty charges being filed for both of them.

Then on November 22, Sheriff Ivey said that the Brevard County Sheriff’s Office Fugitive Unit received a Capias for the arrest of both subjects and immediately went to work to identify their whereabouts. On Wednesday morning, investigators finally located Postell and arrested him. Hayes came out of the residence they were found hiding out and was arrested as well.

"Both Hayes and Postell said that they remembered the little dog, but said she wasn’t significant and did not think they should be arrested over the incident," Sheriff Ivey wrote on his Facebook. They have been transported to the Brevard County Jail and incarcerated on a $2,000 bond.

"On the eve of Thanksgiving, I am thankful that these two are behind bars at the Brevard County Jail for what they did to their dog," Sheriff Ivey said. "I wonder if they think 'Sasha' was significant now, but to be honest I really couldn’t care less what either of them think as they are right where they belong... in our County Jail about to have the worst Thanksgiving possible!"

Sheriff Ivey added that "oh and by the way, 'Sasha' couldn’t care less either as she is about to have probably the best Thanksgiving she has ever had with her new loving family after she was nursed back to health by our Veterinarians and staff at the Brevard County Sheriff’s Office Animal Care Center."

He closed off his Facebook post by saying that he is "sick and tired of perpetrators like these two harming animals and getting such a pathetic bond that they can often get out before our team can even finish the paperwork. Thankfully these two are still in jail but enough is enough with these pathetic bonds!! I can assure you that I will be working closely with our State Attorney Phil Archer who has always taken a hard stance against those who abuse animals and our Chief Judge in Brevard County to change the bond assignments on cases of this nature."