WASHINGTON - Senate Democratic leaders pledged to pass the $1.9 trillion COVID-19 relief bill this week — even as Republicans sought to delay it by having the entire 600-page bill read aloud before a lengthy debate.

Democrats hope to push the aid package, which includes $1,400 stimulus checks, through the upper chamber — but Republicans have presented a unified front against the bill and looked to slow efforts with mountains of GOP amendments and other delays that could take days to plow through.

The Senate voted to begin debate over the aid package Thursday afternoon with Vice President Kamala Harris breaking the 50-50 party line tie. But the 20 hours of debate was delayed after Republicans then requested that the 628-page bill be read aloud — which could last well into the evening and delay the process.

At the start of the session, Senate Majority Leader Charles Schumer, D-N.Y., pledged that lawmakers would stay to finish the bill despite hurdles from the opposition.

"No matter how long it takes, the Senate is going to stay in session to finish the bill this week. The American people deserve nothing less," Schumer said. 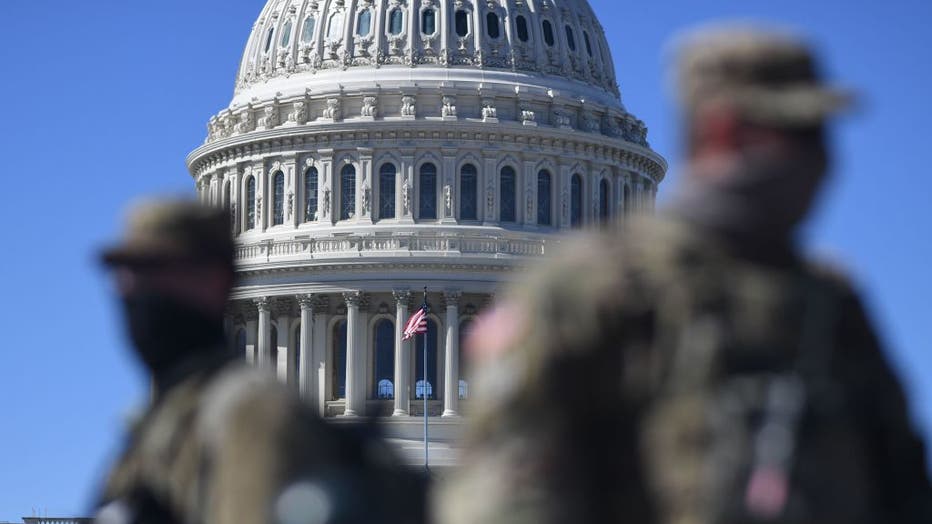 Members of the National Guard are seen patrolling near the U.S. Capitol Building on Capitol Hill on March 3, 2021, in Washington, D.C. (Photo by ERIC BARADAT/AFP via Getty Images)

On Wednesday, Biden and Democrats agreed to tighten eligibility limits for stimulus checks, bowing to party moderates. At the same time, the White House and top Democrats stood by progressives and agreed that the Senate package would retain the $400 weekly emergency unemployment benefits included in the House-passed pandemic legislation.

Moderates have wanted to trim those payments to $300 after Republicans have called the bill so heedlessly generous that it would prompt some people to not return to work.

The dealmaking Wednesday underscored the balancing act Democrats face as they try squeezing the massive relief measure through the evenly divided, 50-50 Senate. The package, Biden’s signature legislative priority, is his attempt to stomp out the year-old pandemic, revive an economy that’s shed 10 million jobs and bring some semblance of normality to countless upended lives.

Democrats have no choice but to broker compromises among themselves, thanks to their mere 10-vote House margin and a Senate they control only with Vice President Kamala Harris’ tie-breaking vote. The party’s moderate and progressive factions are competing to use their leverage, but without going so far as to scuttle an effort they all support.

"He’s pleased with the progress that is being made with the rescue plan," White House press secretary Jen Psaki said of Biden, reflecting the flexibility he and all Democrats will need to prevail. "He’s always said he’s open to good ideas."

Under Wednesday’s agreement, the Senate bill would instead halt the payments completely for individuals making $80,000 and couples earning $160,000, said a Democratic official, who described the agreement only on condition of anonymity.

That means some people who received the last round of $600 relief checks approved in December wouldn't get anything this time.

The House will have to approve the Senate’s version before shipping it to Biden, which Democrats want to do before the last round of emergency jobless benefits run dry March 14.

"I would expect a very long night into the next day and keep going on," said Sen. James Lankford, R-Okla., describing GOP plans to force votes.

Meanwhile, the U.S. House wrapped up its work for the week Wednesday night after intelligence uncovered a "possible plot" by a militia group to storm the iconic building again, two months after a mob of Donald Trump supporters smashed through windows and doors to try to stop Congress from certifying Biden's victory.

The threat appears to be connected to a far-right conspiracy theory, mainly promoted by supporters of QAnon, that former President Trump will rise again to power on March 4 and that thousands will come to Washington, D.C., to try to remove Democrats from office. March 4 was the original presidential inauguration day until 1933, when it was moved to Jan. 20.

Police beefed up their presence in and around the Capitol. About 5,200 National Guard members remain in D.C., the remainder of the roughly 26,000 that were brought in for Biden's inauguration in January, which went off with no problems.