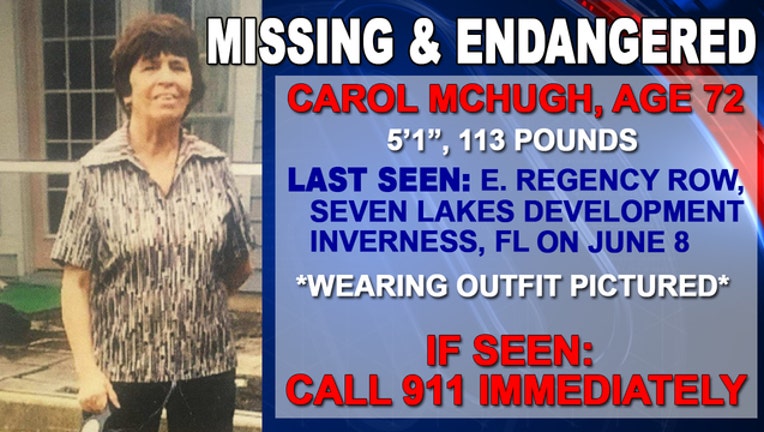 INVERNESS (FOX 13) - The search for a missing and endangered Citrus County grandmother has entered its fourth day Monday.

According to authorities,72-year-old Carol McHugh wandered from home in Inverness Thursday afternoon. She is without any food, water and her medications. She was last seen Thursday at 3:30 p.m. on E. Regency Row in the Seven Lakes development.

Citrus County Sheriff’s Office personnel and volunteers have been searching for McHugh since Thursday night.

Early Sunday morning, Sheriff Prendergast spoke to parishioners at McHugh’s church, Our Lady of Fatima, in Inverness.  "I wanted to reach out to those closest to Carol who may have some insight as to her whereabouts", says Sheriff Prendergast.  "I also wanted to meet with Father Tim, her parish priest, and meet with people who really know Carol to let them know that we are doing everything in our power to bring her home."

McHugh is 5 feet, 1 inch, 113 pounds with brown hair. She was last seen wearing the outfit pictured. If you see her or know of her whereabouts, please call 911 immediately.