MOUNT BALDY, Calif. - A volunteer rescuer and beloved teacher died Saturday while searching for a missing hiker in Mt. Baldy.

Grief counselors were made available to students and staff on the campus of a Catholic boys high school in La Verne where they mourned a popular teacher, a search and rescue volunteer who died over the weekend during a search for a missing hiker.

The deceased rescuer was identified as Timothy Staples, 32, a nine-year veteran of San Bernardino County Sheriff’s Department Search and Rescue. Staples was one of the 126 people working in the search for missing hiker Sreenivas 'Sree' Mokkapati.

More details began to emerge about the search and rescue team member who died while searching for a missing hiker in Mt. Baldy.

Staples, a newlywed, was also an esteemed Social Science and English teacher at Damien High School in La Verne. He was remembered by school officials as a "favorite teacher among his students." Staples also coached cross country and track and field at the school.

"We are deeply saddened by this loss and will make every effort to support our students, faculty, and alumni during this difficult time," a post about Staples on the school's website reads. "We ask that our Spartan families and extended school community come together in prayer and support for Mr. Staples’ family."

According to the sheriff's office, due to extreme and challenging weather conditions, Staples separated from his partner around 1 p.m. About half an hour later, a sheriff's helicopter located him and discovered he was unresponsive on the ice and snow. He was pronounced dead at the scene.

"Our search and rescue volunteers as well as those from throughout the state give up themselves and their times selflessly to try to rescue folks who get lost. And today is an example of what they are trying to give to help save citizens who unfortunately get lost or hurt in some of the most dangerous parts of our state,” stated Sheriff John McMahon with the San Bernardino County Sheriff’s Office.

Remembering the rescue worker who died while looking for missing hiker

The grieving continues for the search and rescue volunteer who died Saturday while searching for a missing hiker on Mount Baldy. Tonight the missing hiker's family held a vigil in honor of Timothy Staples who was also a teacher at Damien High School in La Verne.

“In the day time the snow starts to melt and then as the day goes on and gets cooler it turns to ice and its extremely dangerous. Folks get lost, slide down ice shoots, that’s what happened today apparently, and it can happen even with the most experienced hikers,” he added.

Staples was part of the West Valley Search and Rescue team.

Authorities say 52-year-old Mokkapati, from Irvine, left on a hike with three others a week ago, according to the San Bernardino County Sheriff’s Fontana Station. At some point, Mokkapati was separated from the group. 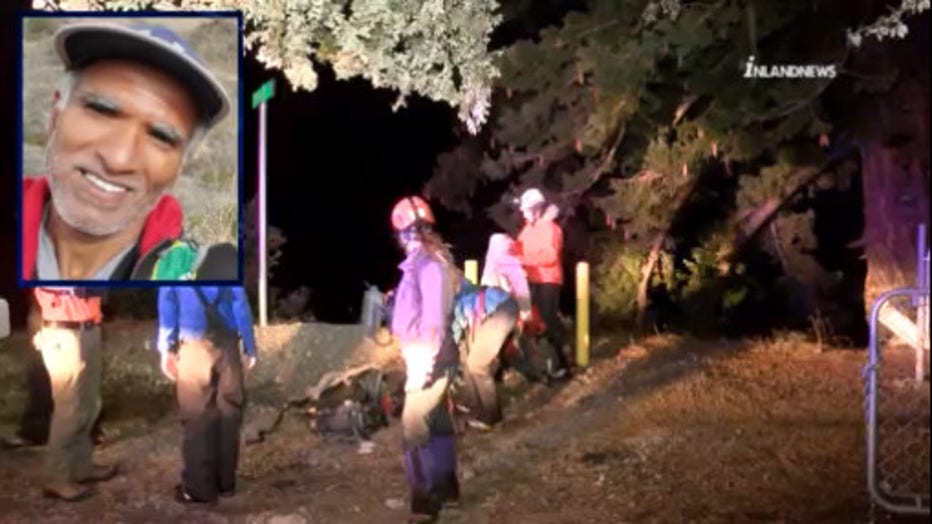 Search and rescue volunteer teams from San Bernardino, Tulare, Fresno, San Mateo and Los Angeles counties have searched the mountain for any sign of Sree or his direction of travel. Currently, all search operations for Mokkapoti have been suspended.

Counselors were made available to all students and staff at Damien High School in light of Staples' untimely death.

A gofundme was established to support Staples' next of kin.