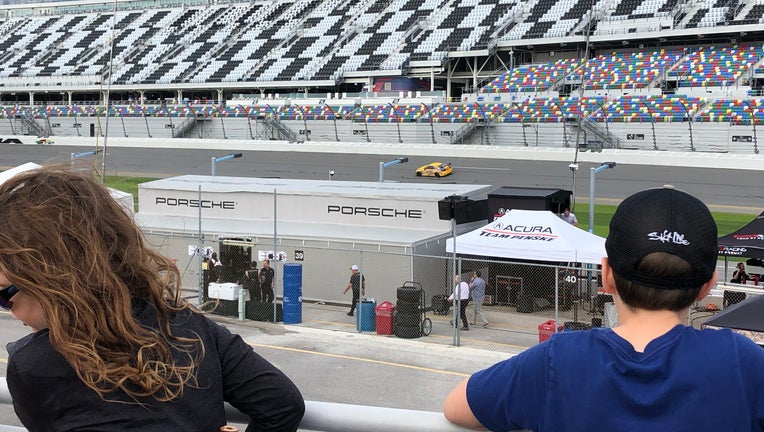 DAYTONA BEACH, Fla. - Engines were revving at the Daytona International Speedway with thousands of very special guests there to watch.

More than 3,500 Boy and Girl Scouts from across the southeastern U.S. camped out in the infield on Saturday in a tradition called Scout Days.

“It's really cool hearing them go around the track, especially thinking when they do the real race I think there's going to be all of them out there, but a lot more of them out there,” said Girl Scout Imani Vandemark.

They were all there for the "Roar Before the 24", an exciting series of races and practice laps for the Rolex24 race that's happening at the end of January.

Scouts camp out at Speedway

More than 3,500 Boy and Girl Scouts from across the southeastern U.S. camped out in the infield on Saturday in a tradition called Scout Days.

This was Scout Days’ 10th year at the Speedway.

Along with seeing the cars going around the track, there were plenty of other events for the kids, with crafts, planetarium shows, movies and even fishing in the infield lake.

Chip Wile, president of the Daytona International Speedway, said they were trying to tailor Saturday's events for the kids.

“We're programming the property for the kids. We have STEM programs this morning. They'll get to be the grand marshals for today's race, and it's not just for scouts, anyone can come out and enjoy the Roar Before the 24 this weekend,” he said.

Scout leaders said it was a fun twist on a traditional camp-out.

“A lot of times our scouts are accustomed to being out in the woods, doing camp-outs in the woods, so this gives them a different aspect of what it's like to camp in an open field with the cars going around constantly,” said Cub Scout Leader Jason Smiley, from Clermont.

Some scouts said the best part was getting to make their mark on the racetrack, literally.

“When we signed the finish line, because it was really cool,” said Girl Scout Pheobe Mikels.