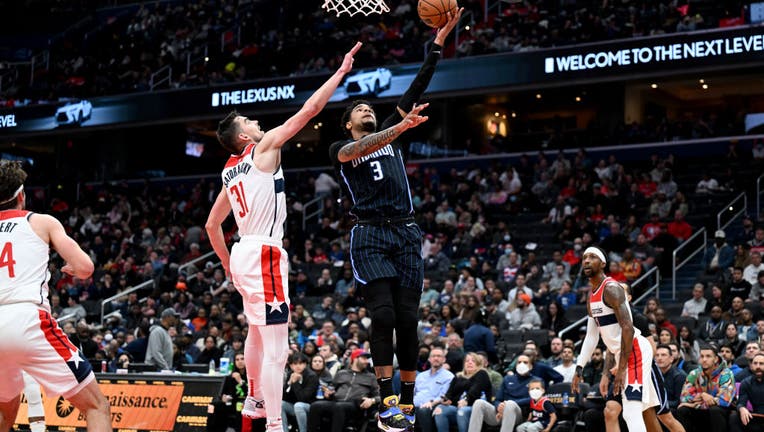 WASHINGTON, DC - MARCH 30: Chuma Okeke #3 of the Orlando Magic goes to the basket in the second half against Tomas Satoransky #31 of the Washington Wizards at Capital One Arena on March 30, 2022 in Washington, DC. NOTE TO USER: User expressly acknowl

WASHINGTON (AP) - Kristaps Porzingis scored 35 points, and Tomas Satoransky had an unusual double-double — no points, 13 assists and 10 rebounds — as the Washington Wizards beat the Orlando Magic 127-110 on Wednesday night.

Satoransky became the third player to finish a game with no points and at least 10 rebounds and 10 assists, joining Oklahoma City’s Josh Giddey earlier this season and Cincinnati’s Norm Van Lier in 1971.

Satoransky attempted only two shots, but he was part of a solid offensive performance for the Wizards. Kentavious Caldwell-Pope added 25 points, and Rui Hachimura and Daniel Gafford contributed 17 apiece.

Franz Wagner scored 28 points for the Magic, who lost their fourth straight. Orlando (20-57) came into the game tied with Detroit and Houston for the worst record in the NBA.

The Magic led 35-23 late in the first quarter, but Washington chipped away and eventually closed the half on a 16-6 run to lead 58-56. The Wizards were up by seven after three quarters and kept Orlando at bay in the fourth.

Gafford threw down a two-handed dunk in the fourth after a no-look pass by Ish Smith. That put the Wizards up 94-85.

Wizards: Washington went 4-0 against Orlando this season, sweeping the Magic for the first time since 2015-16.