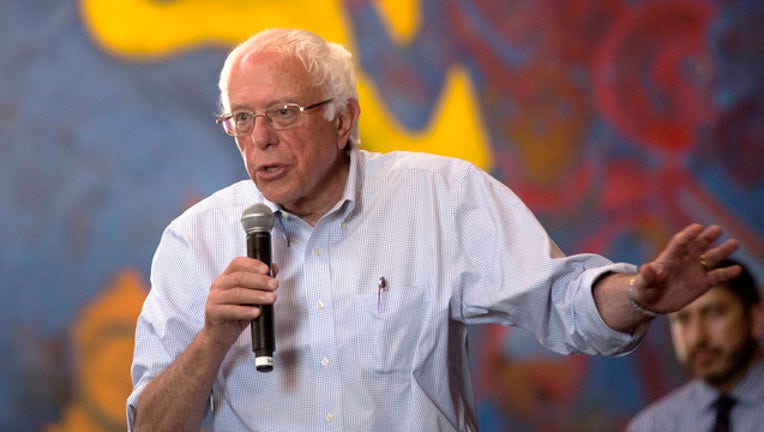 NEW YORK (AP) - Bernie Sanders kicked off his presidential campaign Saturday miles from the rent-controlled apartment where he grew up in Brooklyn and forcefully made the case that he is nothing like fellow New Yorker Donald Trump, proclaiming himself the Democrat best prepared to beat the incumbent in 2020.

"My experience as a child, living in a family that struggled economically, powerfully influenced my life and my values. I know where I came from," Sanders boomed in his unmistakable Brooklyn accent. "And that is something I will never forget."

The Democrats in the 2020 race have taken varied approaches to Trump, with some avoiding saying his name entirely, while others make implicit critiques of his presidency. Sanders has never shied from jabbing Trump in stark terms, and during his speech at Brooklyn College, he called Trump "the most dangerous president in modern American history" and said the president wants to "divide us up."

The Vermont senator positioned himself in opposition to Trump administration policies from immigration to climate change. Beyond the issues themselves, Sanders, who grew up in the heavily Jewish neighborhood of Flatbush in a middle-class family, drew a stark contrast between himself and the billionaire in the White House who hails from Queens.

"I did not have a father who gave me millions of dollars to build luxury skyscrapers, casinos and country clubs," said Sanders, who has lived in Vermont for decades. He pegged his allowance as a kid at 25 cents a week.

Sanders also said he "did not come from a family of privilege that prepared me to entertain people on television by telling workers, 'You're fired.'"

"I came from a family who knew all too well the frightening power employers can have over every day workers," he added.

More than 200 miles away in suburban Washington, Trump revealed in his 2016 victory and said Republicans "need to verify it in 2020 with an even bigger victory."

While Trump didn't mention Sanders explicitly in a two-hour speech, he railed against the policies of "socialism" in a continued attempt to portray Democrats as out of touch with ordinary Americans. Sanders is a self-described democratic socialist.

"Socialism is not about the environment, it is not about justice, it is not about virtue. It is only about one thing - it is called power for the ruling class," Trump said. "We know the future does not belong to those who believe in socialism"

Sanders enters the race at a moment that bears little resemblance to when he waged his long-shot bid in 2016. Democrats have been mobilized by the election of Trump and are seeking a standard-bearer who can oust him from office. Many of Sanders' populist ideas have been embraced by the mainstream of the Democratic party. The field of Democrats that he joins includes a number of liberal candidates, most notably Senator Elizabeth Warren of Massachusetts, who share similar sensibilities.

As Sanders launched his campaign in Brooklyn, Warren was campaigning in Waterloo, Iowa and was questioned repeatedly about Sanders. Though the two have been friends since before they came to the Senate, Warren did not endorse Sanders in 2016, a decision that angered his supporters.

Later asked by reporters how she'll distinguish herself from Sanders, she said she would focus on issues, and emphasized the need for the Democratic field to stick together.

"The way I see it, I got plenty to talk about as it is - about the structural change we need in this country and laying out how we can do this. This is hopeful. People come and they hear what's broken, that we can fix it and that we do it together."

Sanders' rally was his first campaign event since announcing a week ago that he would run against Trump for the White House. Sanders will make his first trip to the leadoff caucus state of Iowa next week, with plans to campaign in Council Bluffs, Iowa City and Des Moines. He is headed to the early state of Iowa

Hours before his speech in Brooklyn College's East Quad, a line of supporters snaked down the snowy streets.

A reggae band played before Sanders spoke, and he was introduced by a number of supporters including Nina Turner, the former Ohio state senator who is a co-chair of Sanders' campaign this year, and Shaun King, the writer and civil rights activist.

King cited Sanders' participation in the civil rights movement in the 1960s, when he was a student at the University of Chicago.

"This is the origin story of an American revolutionary," King said of Sanders, who will return to Chicago on Sunday evening for a second campaign rally, where he's expected to further highlight his own activism.

"I think this was the reason that Democrats lost in 2016," he said.

As he began his speech, Sanders himself hinted at how he sees the race, a campaign that runs beyond the battlegrounds. "This is a 50-state campaign," he said. "We will not concede a single state to Donald Trump."

This version of the story is corrected to say that Pence spoke Friday at the conservative conference, not Thursday.