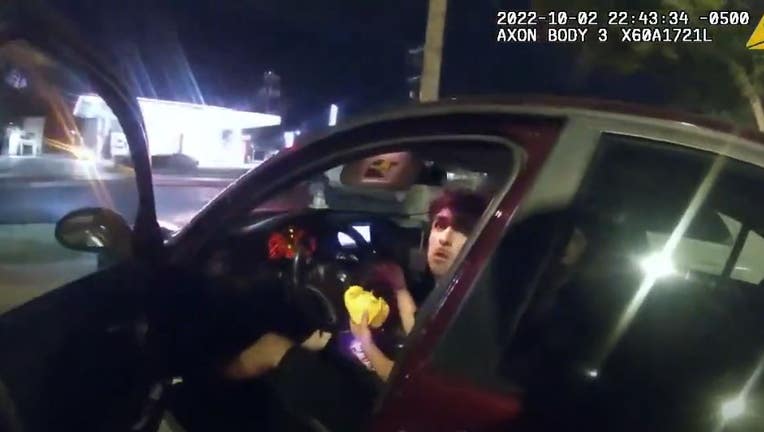 A Texas police officer who shot and wounded a teenager who had been sitting in his car eating a hamburger has been fired, police said.

Brennand had responded to an unrelated disturbance at the fast-food restaurant when he saw the Cantu inside the car, which had evaded him a day earlier, Campos said.

A Texas prosecutor said in a statement Friday that he has not seen enough evidence to file charges against the teenager.

"While Sunday’s shooting of an unarmed teenager by a then-San Antonio Police officer remains under investigation, the facts and evidence we have received so far led us to reject the charges against Erik Cantu for further investigation," Bexar County District Attorney Joe Gonzales said.

Brennand, who had been on the force for less than one year, violated his training and police procedures after approaching the car, Campos said.

"The officer abruptly opened the driver’s door and ordered the driver out of the car" before the arrival of backup officers that Brennand had requested, Campos said.

Cantu, in the officer’s body camera video, looks toward Brennand while holding a hamburger, then backs the car away, striking the officer with the open door.

Brennand then opened fire several times as the door closed and Cantu drove away.

Cantu, who was struck by gunfire, stopped nearby where he and a passenger, who was not injured, were found by police.

"There is nothing I can say in defense of that officer’s actions that night," Police Chief William McManus told WOAI-TV. "I think what happened, initially, there was some contact made, but that did not justify the shooting."

Cantu was hospitalized in stable condition and initially charged with evading police and aggravated assault.

Gonzales, the district attorney, said no decision had been made on whether to pursue charges against Brennand, pending the outcome of a police investigation into the shooting.

"As we do with all officer-involved shootings that result in death or serious injury, we will submit the case to a Grand Jury for their consideration. Until that happens, we can make no further comment on this matter," Gonzales said.

Police and an attorney for Cantu did not immediately return phone calls for comment on Friday.