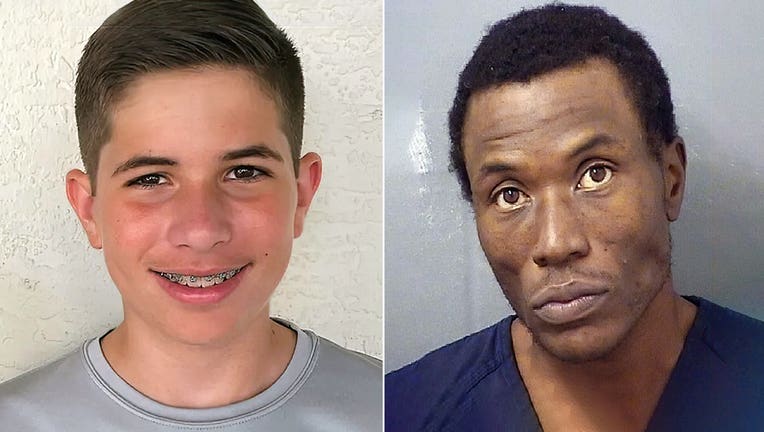 WEST PALM BEACH, Fla. - A homeless man has been found competent to stand trial in the stabbing of a Florida teenager who went missing while riding his bike.

Lawyers for Semmie Williams, 39, had argued — over his objections — that he should be found incompetent and sent to a forensic mental health facility for further evaluation, the Palm Beach Post reported.

Ryan Rogers, 14, was killed in November after leaving home to go on an evening bicycle ride, prosecutors said. His body was later found near an Interstate 95 overpass.

"It is evident to the Court that the Defendant has a strategic disagreement with his attorneys over how to present the case to the jury," the judge wrote. "That, in and of itself, does not make him incompetent to proceed."

Burton, who handles cases in the court’s mental health division, referred the case back to the trial division for a June 21 hearing.

The ruling doesn’t prevent a future court finding that Williams is incompetent.

His mental health has been in question ever since his arrest in December. His lawyers have said he has a "long-standing and persistent mental illness," and had been diagnosed with schizophrenia.

"We’re in this precarious situation where we’re kind of walking a tightrope between having information that we believe establishes that he’s not competent to proceed and protecting confidences that Mr. Williams has disclosed to us and to experts that we’ve retained," Pribble told the judge.

Psychologist Gretchen Moy testified for the defense that while Williams has a factual understanding of the case, his delusional thoughts keep him from having a rational understanding.

She noted Williams believes he’s the victim of a nationwide conspiracy that includes having electronic chips planted throughout his body, having holes poked in his face and being "attacked by demons and other supernatural forces."

She testified that Williams, against the advice of his attorneys, expects to present a defense rooted in delusional beliefs rather than evidence.

"The defense is essentially arguing that the defendant is so incompetent and yet so savvy that he knows who to talk to, what to say, and how to hide his mental issues from two experienced doctors who spent at least an hour with him," Assistant State Attorney Ettie Feistman wrote in her response.

Court records show that Williams spent two years in a Georgia hospital before he was found competent enough to take a plea deal in a separate case. He was homeless at the time of his arrest. In court on Tuesday, Williams told the judge he understood the information being presented by his attorneys.