Journalist Mark Savchuk joins LiveNOW from FOX from Kyiv, Ukraine to update how the war has been going. Savchuk says despite recent attacks, moral among the Ukrainian people is high as they stand united together with the common goal of fighting for freedom.

UKRAINE - Russian forces in Ukraine appear to have shifted their focus from a ground offensive aimed at Kyiv, the capital, to instead prioritizing what Moscow calls liberation of the contested Donbas region in the country's industrial east, officials said Friday, suggesting a new phase of the war.

It appeared too early to know whether this meant President Vladimir Putin had scaled back his ambitions in Ukraine, but Russian military moves this week indicate a recognition of the surprisingly stout Ukrainian resistance.

Putin's forces are under great strain in many parts of the country, and the United States and other countries are accelerating their transfer of arms and supplies to Ukraine. In recent days, U.S. officials have said they see evidence of Ukrainian defenders going on the offensive in a limited way in some areas.

Putting a positive face on it all, the deputy chief of the Russian general staff said his forces had largely achieved the "main objectives" of the first phase of what Moscow calls a "special military operation" in Ukraine. Col. Gen. Sergei Rudskoi said Russian forces had "considerably reduced" the combat power of the Ukrainian military, and as a result Russian troops could "focus on the main efforts to achieve the main goal, liberation of Donbas." 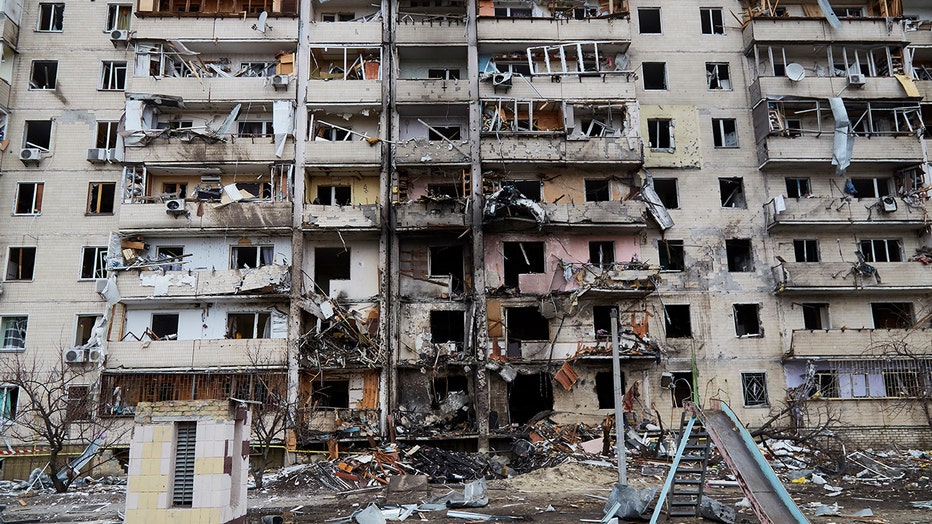 A residential building damaged by a missile on February 25, 2022 in Kyiv, Ukraine. Yesterday, Russia began a large-scale attack on Ukraine, with Russian troops invading the country from the north, east and south, accompanied by air strikes and shelli

A month of fighting has left Russian forces stalled in much of the country, including on their paths toward Kyiv. A senior U.S. defense official said Russian ground forces in the past few days have shown little interest in moving on Kyiv, though they are keeping up airstrikes on the capital.

"At least for the moment, they don’t appear to want to pursue Kyiv as aggressively, or frankly at all. They are focused on the Donbas," the official said, speaking on condition of anonymity to discuss internal U.S. assessments of the war.

From the start of the invasion Feb. 24, Putin has been vague in publicly describing his military goals in Ukraine. He said the purpose was to "demilitarize" and "denazify" the government as well as "liberate" the Donbas, a portion of which has been under Russian-backed separatist control since 2014. Putin arrayed more than 150,000 troops on Ukraine's borders and then pushed them on numerous approaches toward diverse objectives, rather than concentrating on a single strategic goal like Kyiv or the Donbas.

In the four weeks since, Ukrainians have put up a far tougher resistance than Putin likely expected, and Russian forces have been slowed by numerous problems, including weak logistics and perhaps flagging morale.

French President Emmanuel Macron, speaking in Brussels, said "it’s too soon to say" whether the Russians have changed their approach. "It shows very clearly that in any case, a (Russian) operation led simultaneously on all sides was thwarted by the heroic resistance of the Ukrainian people. That’s what we see for several days."

Denied the quick victory he apparently had seen before launching the invasion, Putin is left with stark choices — how and where to replenish his spent ground forces and whether to attack the flow of Western arms to Ukrainian defenders. A big question concerning that second choice: at what cost if he should escalate or widen the war?

The senior U.S official said it appears Putin intends to draw on Russian forces in Georgia as reinforcements in Ukraine. The official said it was unclear where and in what numbers they might enter Ukraine.

Russian shortcomings in Ukraine might be the biggest shock of the war so far. After two decades of modernization and professionalization, Putin’s forces have proved to be ill-prepared, poorly coordinated and surprisingly stoppable. The extent of Russian troop losses is not known in detail, although NATO estimates that 7,000 to 15,000 have died in the first four weeks — potentially as many as Russia lost in a decade of war in Afghanistan.

Robert Gates, the former CIA director and defense secretary, said Putin "has got to be stunningly disappointed" in his military's performance.

"Here we are in Ukraine seeing conscripts not knowing why they’re there, not being very well trained, and just huge problems with command and control, and incredibly lousy tactics," Gates said Wednesday at a forum sponsored by The OSS Society, a group honoring the World War II-era intelligence agency known as the Office of Strategic Services.

The teenagers, Avi Schiffmann and Marco Burstein, hope the website will 'really puts the power back in the hands of the refugee.' (Credit: Avi Schiffmann)

"It is likely that successful counterattacks by Ukraine will disrupt the ability of Russian forces to reorganize and resume their own offensive towards Kyiv," Smeath said in a brief statement Wednesday.

Not long before Putin kicked off his war, some U.S. military officials believed that he could capture Kyiv in short order — perhaps just a few days — and that he might break the Ukrainian military within a couple of weeks. Putin, too, might have expected a quick victory, given that he did not throw the bulk of his pre-staged forces into the fight in the opening days. Nor did his air force assert itself. He has made only limited use of electronic warfare and cyberattacks.

Putin is resorting to siege tactics against key Ukrainian cities, bombing from afar.

The Ukrainians face an uphill battle even as the United States and its allies accelerate and widen a flow of critical weapons and supplies, including anti-aircraft missiles and armed drones. President Joe Biden has vowed to seek longer-range air defense systems for Ukraine as well as anti-ship missiles. Last week he approved a new $800 million package of arms for Ukraine.

Philip Breedlove, a retired Air Force general who served as the top NATO commander in Europe from 2013 to 2016 and is now a Europe specialist with the Middle East Institute, said Ukraine may not win the war outright, but the outcome will be determined by what Ukrainian President Volodymyr Zelenskyy is willing to accept in a negotiated settlement.