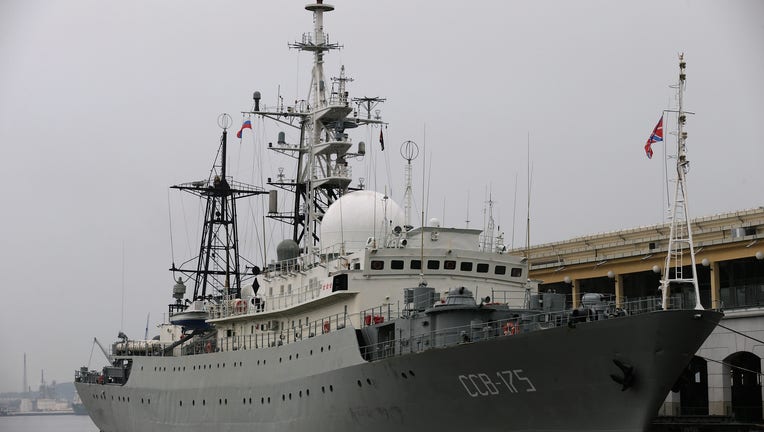 HAVANA, CUBA - JANUARY 20: The Viktor Leonov CCB-175, a Russian Navy intelligence warship, is docked to a pier in Old Havana January 20, 2015 in Havana, Cuba. The ship sailed into the Havana harbor early Tuesday morning on the eve of the start of his

An “unsafe” Russian spy ship spotted near the east coast Tuesday afternoon, appears to have moved away from U.S. shores and towards the Bahamas, a U.S. defense official tells Fox News.

The U.S. Coast Guard in Charleston, S.C. had issued a warning to boaters over the weekend about the spy ship, but the Russian vessel has moved south since the safety bulletin was released, according to the official.

The vessel is the same spy ship that has made an annual trip across the Atlantic for the past two years.

A Coast Guard bulletin says the ship, Victor Leonov, “has been operating in an unsafe manner off the coast of South Carolina and Georgia” near the home of the Navy’s East Coast ballistic missile submarine fleet in Kings Bay, Ga.

The warning says the ship is not using running lights in poor visibility, is not responding to commercial vessels coordinating safe passage and is making "erratic movements.”

“Hey, the greatest thing I could do is shoot that ship that's 30 miles offshore right out of the water," Trump said in January 2017. "Everyone in this country is going to say, 'Oh, it's so great.' That's not great. That's not great. I would love to be able to get along with Russia."

At the time, Fox News first reported the Russian intelligence-gathering ship had cruised up the East Coast and loitered near another submarine base in Connecticut, drawing the ire of local lawmakers, including Sen. Chris Murphy, D-Conn., who warned Russia was trying to “expand influence.”

During the Cold War, deployments like this were very common. Former U.S. submarine skippers said it was rare not to see a Russian spy ship on the edge of U.S. territorial waters, waiting for American “boomers” or ballistic missiles submarines when they were put to sea.