Authorities in Germany this week seized a lavish $600 million yacht belonging to a Russian oligarch, according to reports.

The Dilbar, a 512-foot vessel belonging to billionaire Alisher Usmanov, was taken over by authorities while it was being refitted in a German shipyard, Forbes reported.

The business magazine learned about the move Wednesday, just two days after Usmanov was sanctioned by the European Union as part of its response to Russia’s invasion of Ukraine, the report said.

The EU has accused Usmanov of being a close ally of Russian President Vladimir Putin and a supporter of Russia’s 2014 invasion of Crimea, the Washington Examiner reported.

Usmanov on Tuesday confirmed that financial actions had been taken against him.

"On 28 February 2022 I became the target of restrictive measures imposed by the European Union I believe that such decision is unfair, and the reasons employed to justify the sanctions are a set of false and defamatory allegations damaging my honor, dignity, and business reputation," he wrote Tuesday.

The statement was posted on the website of the International Fencing Federation, where the former professional fencer served as president since 2008 until stepping down Monday, the Examiner reported.

The Dilbar had been undergoing work at a shipyard in Hamburg, Germany, since October, according to Forbes. Employees of Blohm+Voss, the shipbuilding firm overseeing the project, were not at work Wednesday, the report said.

When operating, the ship has a crew of 96 people. It features an 82-foot swimming pool, two helicopter pads, sauna, gym and beauty salon and has 12 suites for accommodating 24 guests. 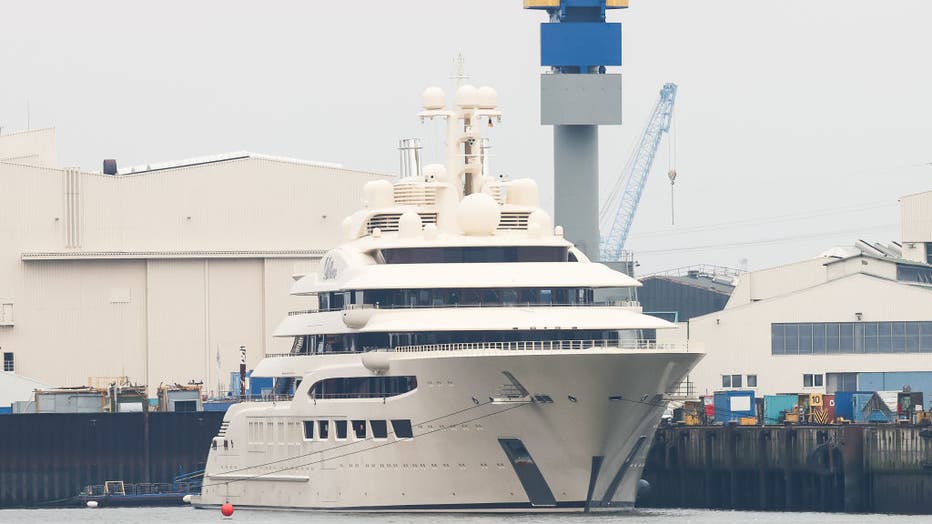 30 October 2021, Hamburg: The luxury yacht Dilbar has moored at the quay wall of the Blohm+Voss shipyard. The 156-metre-long yacht, which weighs almost 16,000 tonnes, was delivered by the Lürssen shipyard in Bremen to a Russian billionaire in 2016.

Usmanov is a former stakeholder in the English soccer club Arsenal FC, having sold his 30% share of the club for nearly $700 million in 2018, the report said.

Usmanov retained a connection to the English Premier League through sponsorship deals involving his companies but those deals were discontinued, the Examiner reported.

Usmanov's fortune comes largely from investments in the production of iron ore, steel and consumer electronics, as well as smaller stakes in telecom, mining and media companies, Forbes reported.

He also has numerous real estate assets in Europe, according to the report.

President Biden and other Western leaders have made Russian oligarchs a target of their efforts to put economic pressure on Putin as he continues the Russian invasion of Ukraine.

This week in Washington, House Republicans promoted a bill that would let U.S. citizens seize yachts, planes and other property belonging to Russian citizens in the U.S.