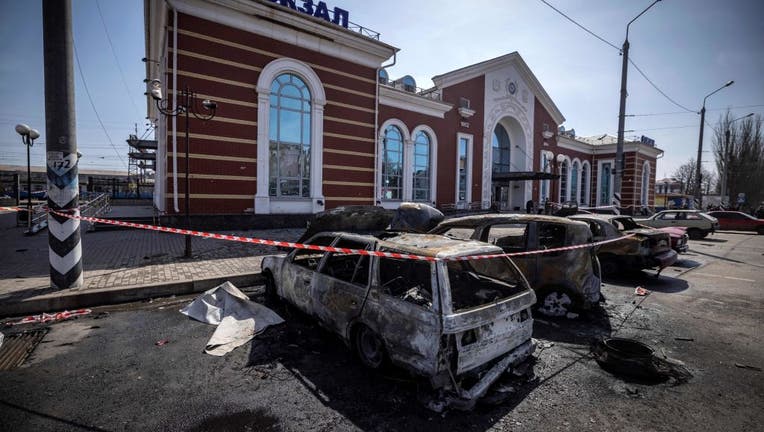 Calcinated cars are pictured outside a train station in Kramatorsk, eastern Ukraine, that was being used for civilian evacuations, after it was hit by a rocket attack killing at least 35 people, on April 8, 2022. (Photo by FADEL SENNA / AFP) (Photo b

KYIV, Ukraine - A missile hit a train station in eastern Ukraine where thousands had gathered Friday, killing at least 52 and wounding dozens more in an attack on a crowd of mostly women and children trying to flee a new, looming Russian offensive, Ukrainian authorities said.

The attack that some denounced as yet another war crime in the 6-week-old conflict came as workers unearthed bodies from a mass grave in Bucha, a town near Ukraine's capital where dozens of killings have been documented after a Russian pullout.

Photos from the station in Kramatorsk showed the dead covered with tarps, and the remnants of a rocket with the words "For the children" painted on it in Russian. About 4,000 civilians had been in and around the station, heeding calls to leave before fighting intensifies in the Donbas region, the office of Ukraine’s prosecutor-general said. 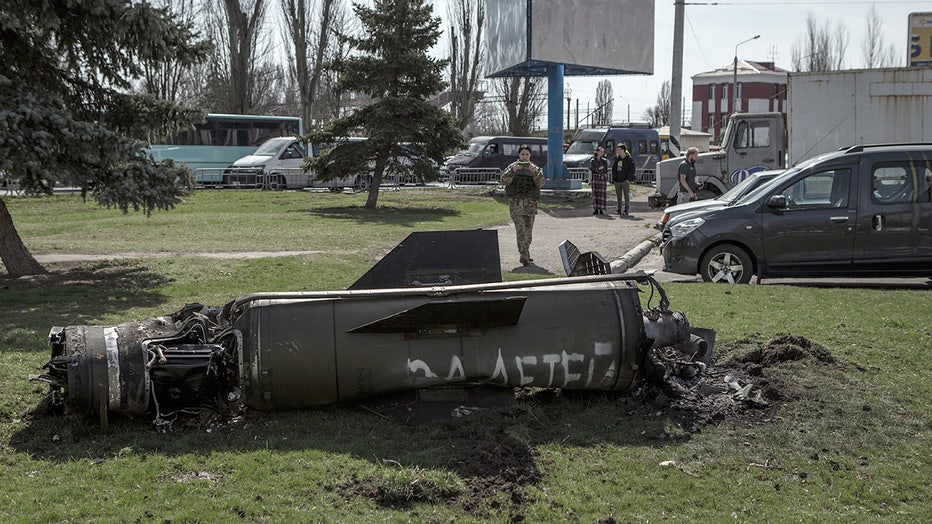 A Russian missile is seen where dozens of people were killed and more than 100 injured in a Russian attack on a railway station in eastern Ukraine on April 8, 2022. (Photo by Andrea Carrubba/Anadolu Agency via Getty Images)

Ukrainian President Volodymyr Zelenskyy and other leaders accused Russia’s military of deliberately attacking the station. Russia, in turn, blamed Ukraine, saying it doesn't use the kind of missile that hit the station — a contention experts dismissed.

"Without the strength or courage to stand up to us on the battlefield, (Russian troops) are cynically destroying the civilian population," Zelenskyy said on social media. "This is an evil without limits. And if it is not punished, then it will never stop."

Pavlo Kyrylenko, the regional governor of Donetsk, in the Donbas, said 52 people were killed, including five children, and many dozens more were wounded.

"There are many people in a serious condition, without arms or legs," Kramatorsk Mayor Oleksandr Goncharenko said. Even with 30 to 40 surgeons working to treat them, the local hospital was struggling to cope, he said. 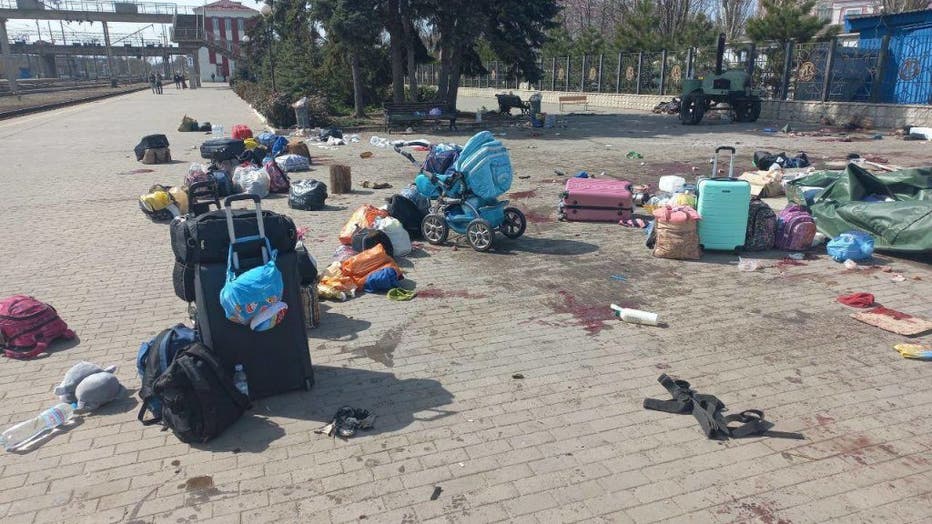 KRAMATORSK, UKRAINE - APRIL 8: Belongings of civilians are seen after over 30 people awaiting evacuation were killed, more than 100 injured in a Russian missile strike on Kramatorsk railway station in Ukraine on April 8, 2022. (Photo by Ukranian Pres

"There are almost no words for it," European Union Commission President Ursula von der Leyen, who is on a visit to Ukraine, told reporters. "The cynical behavior (by Russia) has almost no benchmark anymore."

Ukrainian authorities and Western officials have repeatedly accused Russian forces of atrocities in the war that began with Russia’s invasion on Feb. 24. More than 4 million Ukrainians have fled the country, and millions more have been displaced. Some of the most startling evidence of atrocities has been found in towns around Ukraine's capital, Kyiv, from which Russian President Vladimir Putin's troops pulled back in recent days.

In Bucha, Mayor Anatoliy Fedoruk has said investigators found at least three sites of mass shootings of civilians and were still finding bodies in yards, parks and city squares — 90% of whom were shot.

Russia has falsely claimed that the scenes in Bucha were staged.

On Friday, workers pulled corpses from a mass grave near a town church under spitting rain, lining up black body bags in rows in the mud.

About 67 people were buried in the grave, according to a statement from Prosecutor-General Iryna Venediktova's office, which is investigating those deaths and other mass casualties involving civilians as possible war crimes.

In his nightly video address Thursday, Zelenskyy warned that more horrors could yet be revealed. Already, he said, atrocities worse than the ones in Bucha had surfaced in Borodyanka, another settlement outside the capital. Twenty-six bodies were found there Thursday.

"And what will happen when the world learns the whole truth about what the Russian troops did in Mariupol?" Zelenskyy said, referring to the besieged southern port that has seen some of the greatest suffering during Russia’s invasion.

The killings around Kyiv were revealed when Russian forces pulled back after failing to take the capital in the face of stiff Ukrainian resistance. Russian troops have now set their sights on the Donbas, the mostly Russian-speaking, industrial region in eastern Ukraine where Moscow-backed rebels have been fighting Ukrainian forces for eight years and control some areas.

A senior U.S. defense official said Friday that the Pentagon believes some of the retreating units were so badly damaged they are "for all intents and purposes eradicated." The official spoke on condition of anonymity to discuss internal military assessments.

The official did not say how many units sustained such extensive damage. Overall, the official said the U.S. believes Russia has lost between 15% and 20% of its combat power since the war began. While some combat units are withdrawing to be resupplied in Russia, Moscow has added thousands of troops around Ukraine’s second-largest city, Kharkiv, he said.

The train station hit in Friday's missile strike is in Ukrainian government-controlled territory, but Russia insisted it wasn't behind the attack. Its Defense Ministry accused Ukraine of carrying it out, in a statement carried by state news agency RIA Novosti. So did the region's Moscow-backed separatists, who work closely with Russian regular troops. 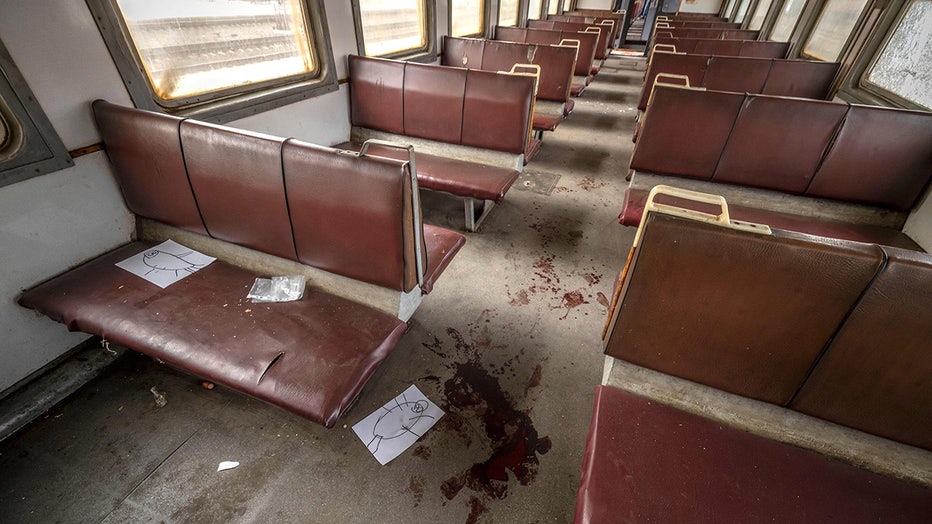 This photograph taken on April 8, 2022 shows a train car after a rocket attack at a train station in Kramatorsk, eastern Ukraine, that was being used for civilian evacuations. (Photo by FADEL SENNA/AFP via Getty Images)

Experts, refuting Kremlin spokesperson Dmitry Peskov's assertion that Russian forces "do not use" that type of missile, say Russia has used it during the war. One analyst added that only Russia would have reason to target railway infrastructure in the Donbas.

"The Ukrainian military is desperately trying to reinforce units in the area … and the railway stations in that area in Ukrainian-held territory are critical for movement of equipment and people," said Justin Bronk, a research fellow at the Royal United Services Institute in London.

Bronk pointed to other occasions when Russian authorities have tried to deflect blame by claiming their forces no longer use an older weapon "to kind of muddy the waters and try and create doubt." He also suggested that Russia specifically chose the missile type because the Ukrainian army also has it.

A Western official, speaking on condition of anonymity to discuss intelligence, also said Russia’s forces have used the missile — and that given the strike's location and impact, it was "likely" one of theirs, though they could not formally attribute it to Moscow.

The strikes comes as Russia is concentrating equipment and troops and increasing shelling and bombing ahead of an expected onslaught, said Serhiy Haidai, governor of the Luhansk region in the Donbas.

"We sense the end of preparations for that massive breakthrough, for that great battle which will happen here around us," he said in a televised address.

Ukrainian officials have pleaded with Western powers to send more arms — and further punish Russia with sanctions — to stop the offensive.

NATO nations agreed Thursday to increase their supply of weapons, and Slovakian Prime Minister Eduard Heger announced on a trip to Ukraine on Friday that his country has donated its Soviet-era S-300 air defense system to Ukraine. Zelenskyy had appealed for S-300s to help the country "close the skies" to Russian warplanes and missiles.

American and Slovak officials said the U.S. will then deploy a Patriot missile system to Slovakia.

Heger accompanied von der Leyen and EU foreign policy chief Josep Borrell to Kyiv, part of efforts to signal the EU’s support for Ukraine. After meeting with Zelenskyy on Friday, von der Leyen provided the Ukrainian president with a questionnaire that is a first step for applying for EU membership.

In anticipation of intensified attacks by Russian forces elsewhere, hundreds of Ukrainians fled villages that were either under attack or occupied in the southern regions of Mykolaiv and Kherson.

"They are waiting for a big battle," said Marina Morozova, who had fled Kherson with her husband. Kherson was the first major city to fall to the Russians and is the scene of continued fighting.

Morozova, 69, said only Russian television and radio was available there. The Russians handed out humanitarian aid, she said, and filmed the distribution.