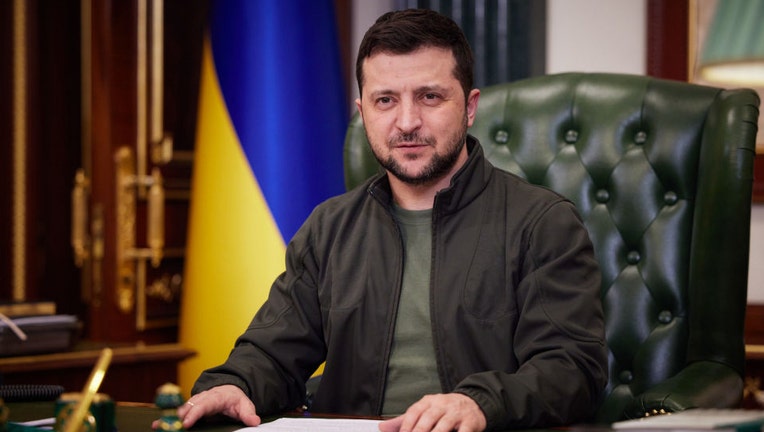 KHARKIV, Ukraine - Ukrainian officials say the death toll from a strike on a theatre last week in the besieged southern port city of Mariupol is in the hundreds — the deadliest single attack since Russia’s war started a month ago.

During a nightly video address, President Volodymyr Zelenskyy called on Ukrainians to keep up their fierce resistance to the Russian invaders, insisting that his nation is "getting closer to victory" with every day.

President Joe Biden was in Poland on Friday to pay tribute to a country that has taken in more than 2 million Ukrainian refugees who were forced to flee their homes since the war began.

What happened in Mariupol?

Local authorities in Mariupol said Friday that last week’s Russian airstrike on a theater used as bomb shelter killed "about 300" people, citing eyewitnesses. It wasn't immediately clear whether emergency workers had finished excavating the site or how the eyewitnesses had arrived at the horrific death toll.

More than 1,300 people had been sheltering in the building ahead of the March 16 attack and the theater had a huge inscription reading "CHILDREN" posted outside, intended to be visible from the skies.

Tens of thousands have fled Mariupol in the past week, most of them driving out in private cars through dozens of Russian checkpoints. The city of Zaporizhzhia, the closest urban center, has become a waystation of sorts before they continue further to safety.

"Unfortunately, nothing remains of Mariupol," said Evgeniy Sokyrko, one of those who left. "In the last week there have been explosions like I’ve never heard before."

But Russian Col. Gen. Mikhail Mizintsev said the roughly 400,000 people evacuated to Russia since the start of the war were from the Donetsk and Luhansk regions in eastern Ukraine, where pro-Moscow separatists have been fighting for control for nearly eight years.

Are Ukrainians being forced into Russia?

Ukraine officials say Russian troops are confiscating passports from Ukrainian citizens in territory they've taken, then moving them to "filtration camps" in Ukraine’s separatist-controlled east before sending them to distant, economically depressed areas in Russia. Lyudmyla Denisova, Ukraine’s ombudsperson, said 402,000 people, including 84,000 children, were moved against their will.

However, Russian Col. Gen. Mikhail Mizintsev said the roughly 400,000 people evacuated to Russia since the start of the war were from the Donetsk and Luhansk regions in eastern Ukraine, where pro-Moscow separatists have been fighting for control for nearly eight years.

What else is happening on the battlefield?

The sheer scope of the bloodshed in Ukraine has fueled allegations that Moscow is committing war crimes by killing civilians, whether deliberately or by indiscriminate fire, with a NATO official saying Russian President Vladimir Putin’s war is "unprovoked, illogical and also barbarian."

A local official in the northern city of Chernihiv said Russian troops are deliberately targeting sites where food is being stored. It's estimated that more than 130,000 people remain in the city, which had a pre-war population of 285,000.

Chernihiv has been further cut off after a vital pedestrian bridge over the Desna River was damaged by shelling, the local governor said Friday. The tall and narrow concrete bridge had become a vital link to the outside world after the main road bridge over the Desna was destroyed earlier this week by a Russian airstrike. That severely hampered efforts to get supplies in and civilians out on a highway leading south to the capital, Kyiv.

What are Western leaders doing?

The United States and the European Union on Friday announced a move to further squeeze Russia economically — a partnership to reduce Europe’s reliance on Russian energy and dry up the billions of dollars the Kremlin gets from the sale of fuel.

Germany’s economy minister said his country has forged contracts with new suppliers that will allow it to significantly reduce its reliance on Russian coal, gas and oil in the coming weeks.

Russian Foreign Minister Sergey Lavrov described Western efforts to sanction Russia internationally as "total war." He said on Friday that the goal was "to destroy, break, annihilate, strangle the Russian economy, and Russia on the whole."

Meanwhile, NATO Secretary-General Jens Stoltenberg reiterated that any use of chemical or nuclear weapons "will totally change the nature of the war in Ukraine. It will be absolutely unacceptable."

Biden's visit to Poland is his final stop in Europe this week to underscore America's commitment to protect a key NATO member on Ukraine’s doorstep. He visited U.S. troops stationed near Poland’s border with Ukraine and got a first-hand look at the growing humanitarian response to the millions of Ukrainians fleeing to Poland to escape Russia’s assault.

What is Russia saying?

The deputy head of Russia’s military general staff says that 1,351 Russian soldiers have died in Ukraine. Col.-Gen. Sergei Rudskoi also said Friday that 3,825 have been wounded.

That's far lower than NATO estimates from Wednesday that 7,000 to 15,000 Russian soldiers have been killed in four weeks of war in Ukraine. Also, the Russian figure didn't appear to include the Moscow-backed separatists fighting in eastern Ukraine, and it was not clear whether the toll encompassed Russian forces not part of the Defense Ministry, such as the National Guard.

Ukrainian troops have repositioned their forces just west of Kyiv amid reports they had pushed out the Russians following fierce battles. In the village of Yasnohorodka, west of Kyiv, AP reporters saw signs of heavy fighting. The tower of the village church was damaged by a blast and houses on the main crossroad lay in ruin.

To the east, the outskirts of Kharkiv were shrouded by foggy smoke Friday, with shelling constant since the morning. In a city hospital, several injured soldiers arrived, with bullet and shrapnel wounds. As doctors worked, the sound of shelling could be heard in the surgery ward.

Satellite photos from Planet Labs PBC analyzed by The Associated Press show thick black smoke rising Thursday over the port in Berdyansk, with a large ship on fire. The timing of the photos correspond with what the Ukrainian navy described as a successful attack on a Russian landing craft. The image also corresponds to online videos purportedly showing the attack at the port in the city held by Russia on the Sea of Azov.

Shelling was heard in northern Kharkiv on Thursday afternoon, and AP journalists saw an ambulance collecting four bodies near the remnants of rockets. Smoke billowed from neighborhoods and at least one house was destroyed.

What has the war's civilian toll been so far?

U.N. High Commissioner for Refugees Filippo Grandi said on Friday that since Russia's invasion started, almost a quarter of Ukraine’s population — more than 10 million people — have been forced from their homes.

Some 3.7 million refugees have fled the country, the fastest-growing refugee crisis since World War II. Also, 6.5 million people have been displaced within Ukraine, and at least 13 million are estimated to be stranded in affected areas or unable to leave, he said.

"Millions have been living through the horror of war in Ukraine," Grandi said. "Without an immediate end to the fighting, this unspeakable suffering and mass human displacement will only get worse."