KYIV, Ukraine - Russia’s war on Ukraine is in its ninth day. U.N. and Ukrainian officials say no radiation was released from a Russian attack at Europe’s biggest nuclear power plant. One building caught fire and firefighters have extinguished the blaze.

Russian forces continued to press a campaign that has brought global condemnation. People across Ukraine have taken up arms and sought shelter. More than 1.2 million people have fled to neighboring countries, the U.N. refugee agency said Friday.

NATO is refusing to police a no-fly zone over Ukraine. The 30-nation military organization believes such a move could provoke widespread war in Europe with Russia.

Here’s a look at key things to know about the conflict:

Russian troops seized the Zaporizhzhia nuclear plant in the southeastern city of Enerhodar in an attack that evoked memories of the world’s worst nuclear disaster, at Ukraine’s Chernobyl.

The International Atomic Energy Agency said no radiation spikes were detected. The chief of the U.N. agency, Rafael Mariano Grossi, said a Russian "projectile" hit a training center, not any of the six reactors.

Ukrainian Prime Minister Denys Shmyhal appealed to the IAEA and the EU to send representatives to all five Ukrainian nuclear power plants. "This is a question of the security of the whole world," he said in a nighttime video address.

The U.S. Embassy in Ukraine issued an unexpectedly harsh statement calling Russia’s attack on the nuclear plant a war crime.

The Russian army is "firing from all sides" at Zaporizhzhia nuclear power plant in southern Ukraine, the country’s foreign minister Dmytro Kuleba tweeted on Friday. The plant is the largest nuclear power station in Europe.

Directly witnessed or confirmed by AP

Frequent shelling could be heard Friday from the center of the capital, Kyiv.

Heavy fighting continued on the outskirts of Mariupol, a strategic port, knocking out the city’s electricity, heat and water systems, and most phone service. Food deliveries were also cut.

Russian forces have captured the southern city of Kherson, a vital Black Sea port of 280,000 — the first major city to fall. Russian armored vehicles were seen in the otherwise empty streets of Kherson, in videos shared with the AP by a resident. 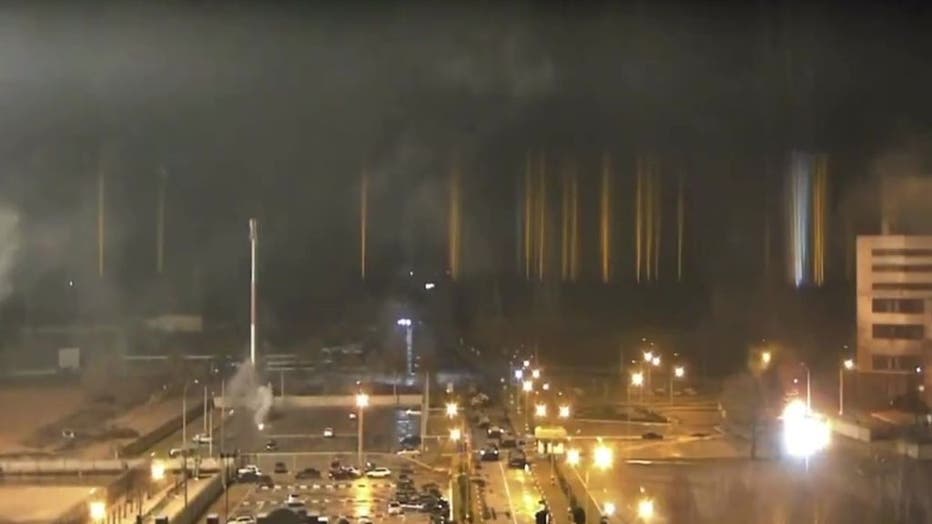 ZAPORIZHZHIA, UKRAINE - MARCH 4: A screen grab captured from a video shows a view of Zaporizhzhia nuclear power plant during a fire following clashes around the site in Zaporizhzhia, Ukraine on March 4, 2022. (Photo by Zaporizhzhia Nuclear Power Plan

What else is happening on the ground?

Battles involving airstrikes and artillery continued Friday northwest of Kyiv, and in the northeast, with the cities of Kharkiv and Okhtyrka coming under heavy strikes, Ukrainian presidential adviser Oleksiy Arestovich said.

Ukrainian defense forces were holding on to the northern city of Chernihiv, and have prevented Russian efforts to take the important southern city of Mykolaiv, he said.

Ukrainian artillery have been defending Odesa from repeated attempts by Russian ships to fire on the Black Sea port city, he said, insisting there’s no immediate threat to the city.

Some Ukrainian drone enthusiasts are risking their lives by forming a volunteer drone force to help their country repel the Russian invasion. Civilians are using the aerial cameras to track Russian convoys and relay the images and GPS coordinates to Ukrainian troops. 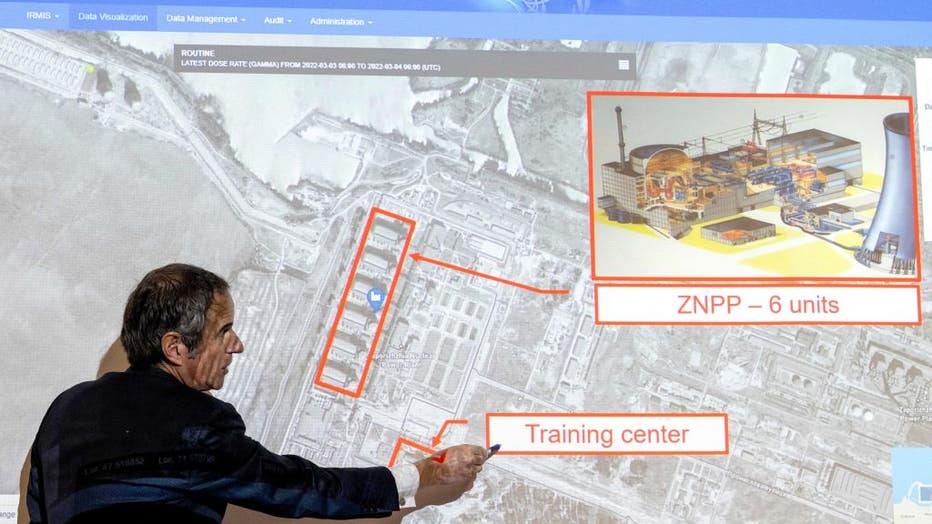 Rafael Grossi, Director General of the International Atomic Energy Agency (IAEA), points on a map of the Ukrainian Zaporizhzhia power plant as he informs the press about the situation of nuclear powerplants in Ukraine during a special press conferenc

Where are refugees going?

The United Nations High Commissioner for Refugees' data portal showed that the vast majority of those who have left Ukraine since the invasion began — about 650,000 — went to neighboring Poland. Roughly 145,000 fled to Hungary. An additional 103,000 were in Moldova and more than 90,000 in Slovakia.

More than 100 Jewish refugee children who were evacuated from a foster care home in Ukraine and made their way across Europe by bus arrived in Berlin on Friday. The 105 children — the youngest only 5 weeks old — had left Odesa 52 hours earlier. The children received financial assistance from Jewish aid groups, and diplomatic support from Israel, Germany and other European states.

Brazil — which has Latin America’s biggest population of Ukrainians and their descendants — said it will issue temporary humanitarian visas and residency permits for Ukrainian nationals and others affected by the war.

In Hungary, a pastor in a village on the border with Ukraine offered up the only room in his church to a family of 27 women and children who were fleeing the invasion.

Russia has acknowledged that nearly 500 Russian troops have been killed and around 1,600 wounded.

Ukraine has not released casualty figures for its armed forces.

The U.N. human rights office says at least 331 civilians have been killed and 675 wounded in Ukraine since the start of the invasion. Ukraine’s State Emergency Service has said more than 2,000 civilians have died, though it’s impossible to verify the claim. 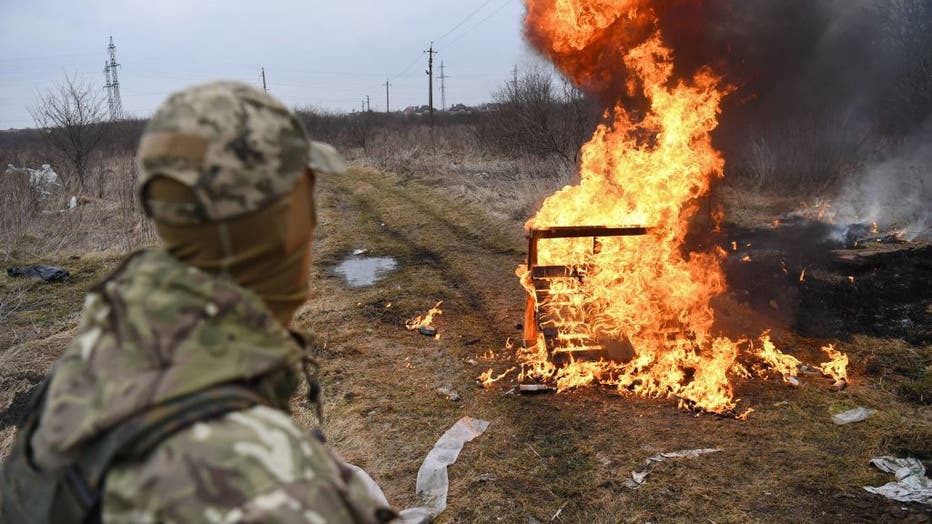 A Ukrainian soldier looks at flames after throwing a cocktail Molotovs during a self-defence civilian course on the outskirts of Lviv, western Ukraine, on March 4, 2022. (Photo by DANIEL LEAL/AFP via Getty Images)

U.S. President Joe Biden said Russian President Vladimir Putin's invasion of Ukraine is "an attack on the security of Europe."

Biden made the comment while meeting on Friday with Finnish President Sauli Niinisto in the White House. Biden said in a tweet that the two leaders called Sweden’s Prime Minister Magdalena Andersson during their meeting.

Biden and Niinisto committed to start a process that would strengthen U.S.-Finnish security cooperation, the White House said.

Finland, as well as neighbor Sweden, for years has resisted joining NATO, with Nordic European Union members seeking to remain neutral between Russia and the West. But the Russian invasion of Ukraine is changing the dynamic.

Biden said at the start of his meeting with Niinisto: "We agree it’s not only an attack on Ukraine, it’s an attack on the security of Europe."

The Finnish leader said his nation will do its best to help Ukraine.

The wave of global sanctions on Russia could have devastating consequences for energy and grain importers. Russia is a leading exporter of grains and a major supplier of crude oil, metals, wood and plastics.

Spain’s Teatro Real, one of Europe’s major opera houses, said it is canceling a set of upcoming performances by Russia’s Bolshoi Ballet.

Putin on Friday signed a bill into law that threatens up to 15 years in prison for what Russia deems to be "fake" reports about the war.

Also, the state communications watchdog blocked Facebook, Twitter and five foreign media organizations based abroad that publish news in Russian. Those organizations — the BBC, the U.S. government-funded Voice of America and Radio Free Europe/Radio Liberty, German broadcaster Deutsche Welle and Latvia-based website Meduza — are among the most influential and often critical foreign media publishing in Russian.