KYIV, Ukraine - The battle for Ukraine's cities thundered across its suburbs, with the Ukrainian military forcing Russian troops out of a strategically important Kyiv neighborhood, while Russian forces took partial control of three northwest suburbs where there's been fighting for weeks.

More than 3.5 million people have fled Ukraine since Russia invaded on Feb. 24, and millions more have been displaced within the country, the United Nations said.

Civilians making the dangerous escape from the embattled southern port city of Mariupol described fleeing through gun battles and past unburied corpses as Russian forces tried to pound the city into submission. There was no immediate sign of a diplomatic breakthrough.

Why are the suburbs turning into battlefields?

The suburbs could be a barrier to Ukraine's cities or a doorway for Russian troops, particularly around the capital of Kyiv — believed to be Moscow's primary military objective.

After a fierce battle, Ukrainian troops regained control of the suburb of Makariv on Tuesday, allowing Ukrainian forces to retake a key highway to the west and block Russian troops from surrounding the capital from the northwest, Ukraine's Defense Ministry said.

But the ministry said Russian forces were able to partially take northwest suburbs of Bucha, Hostomel and Irpin, some of which had been under attack for weeks.

Still, Russian forces are increasingly concentrating their air power and artillery on Ukraine’s cities and the civilians living there. A senior U.S. defense official, speaking on condition of anonymity to discuss the military’s assessment, said Russia had increased air sorties in recent days, carrying out as many as 300 through the weekend.

Outside devastated Mariupol, the Kremlin’s ground offensive has advanced slowly, knocked back by lethal hit-and-run attacks by the Ukrainians. 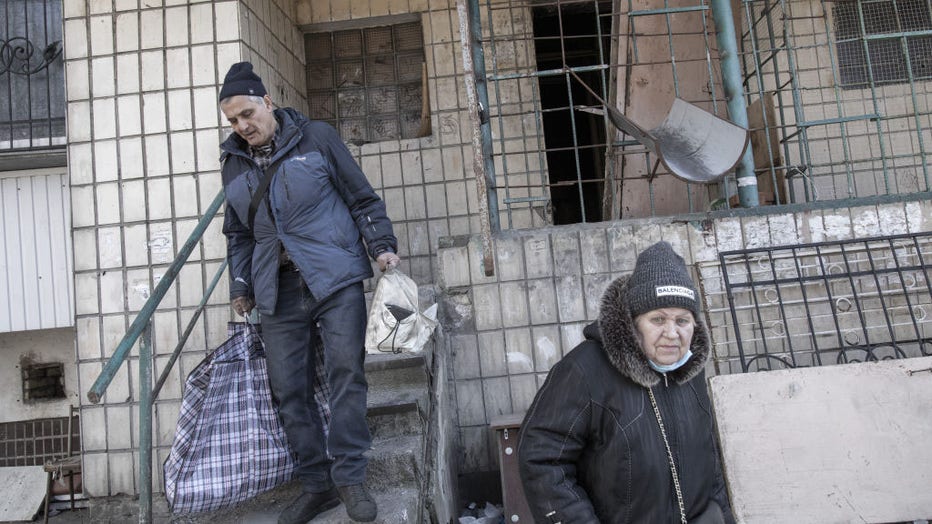 KYIV, UKRAINE - MARCH 21: Ukrainian civilians collect their belongings from their apartment after it was damaged by a bombing in a residential neighborhood in Kyiv, Ukraine, on March 21, 2022. (Photo by Narciso Contreras/Anadolu Agency via Getty Imag

What's the latest on Mariupol?

The Russian assault has turned living in Mariupol into a fight for survival.

Electricity, water and food supplies have been cut off, as well as communication with the outside world. It's unclear how many remain in the city with a prewar population of 430,000. About a quarter were believed to have fled early in the war and tens of thousands more have escaped over the past week by way of humanitarian corridors.

Other attempts to leave have been thwarted by Russian efforts to pound Mariupol into submission. On that, Moscow has not succeeded, Britain’s defense ministry said Tuesday. Ukraine’s Defense Ministry said their forces were still defending the city and had destroyed a Russian patrol boat and electronic warfare complex.

But Russia now controls the land corridor from Crimea, the peninsula it annexed in 2014, and is blocking Ukraine’s access to the Sea of Azov.

Those who have made it out of Mariupol described a devastated landscape.

"There are no buildings there anymore," said 77-year-old Maria Fiodorova, who crossed the border to Poland on Monday after five days of travel.

In the Russian-occupied southern city of Kherson on Monday, Russian forces shot into the air and fired stun grenades at protestors who were chanting "Go home!" Early this month, Kherson became the first major city to fall to Russia’s offensive.

In Kyiv, a shopping center in the densely populated Podil district, near the city's center, remained a smoking ruin after being hit late Sunday by shelling that killed eight people, according to emergency officials. The attack shattered every window in a neighboring high-rise.

On Tuesday, explosions could be heard in Kyiv, and artillery fire intensified in the northwestern part of the city. Black smoke could be seen at a distance in the north.

Is the war affecting wheat supplies?

Russia's war on Ukraine has jeopardized grain supplies from a region known as "the breadbasket of the world," forcing farmers and governments to rethink crop planning to offset losses from the conflict, drought and rising fuel prices.

Ukraine and Russia account for a third of global wheat and barley exports, which countries in Asia, Africa and the Middle East rely on to feed millions of needy people. About half of the grain the World Food Program buys to feed 125 million people worldwide comes from Ukraine. The double blow of rising food prices and depressed wheat exports from the war is a recipe for "catastrophe not just in Ukraine, but potentially globally," the head of the U.N. food assistance agency warned.

Major grain producers like the United States, Canada, France, Australia and Argentina are being closely watched to see if they can quickly ramp up production to fill in the gaps from lost Ukrainian and Russian supplies.

Ukrainian President Volodymyr Zelenskyy said he was prepared to discuss a commitment that Ukraine would not seek NATO membership in exchange for a cease-fire, the withdrawal of Russian troops and a guarantee of Ukraine’s security.

"It’s a compromise for everyone: for the West, which doesn’t know what to do with us with regard to NATO, for Ukraine, which wants security guarantees, and for Russia, which doesn’t want further NATO expansion," Zelenskyy said.

He also repeated his call for direct talks with Russian President Vladimir Putin. Unless they meet, it is impossible to understand whether Russia even wants to stop the war, Zelenskyy said.

Zelenskyy also said that Ukraine will be ready to discuss the status of Crimea and the eastern Donbas region held by Russian-backed separatists after a cease-fire and steps toward providing security guarantees.

The Kremlin is demanding Ukraine disarm and declare itself neutral. Russian presidential spokesperson Dmitry Peskov said Tuesday that he could not share details of ongoing talks, saying that making them public would damage negotiations.

U.S. President Joe Biden travels to Europe this week, where he will attend a summit with NATO leaders that will look for ways to strengthen the bloc’s own deterrence and defense to deal with the now openly confrontational Putin.

The Kremlin has bristled at remarks coming from the Americans. The Russian Foreign Ministry has warned that relations with the U.S. are "on the verge of a breach" and summoned the U.S. ambassador.

Biden has added a stop to Poland during his trip, visiting a crucial ally of Ukraine which has taken in more than 2 million refugees.

In the independent Novaya Gazeta newspaper, which Muratov edits, he called for people to "share with refugees, the wounded and children who need urgent treatment." Last year, he said he was giving away his share of the Nobel prize money to causes including independent media, a Moscow hospice, and care for children with spinal problems.

What about support for Russia?

A Serbian government minister says Belgrade will never impose sanctions or join the Western "hysteria" against Russia for its invasion of Ukraine, echoing Moscow's pro-war propaganda.

"Serbia will never be part of the anti-Russian hysteria in which the property of Russian citizens and the property of the Russian Federation is stolen," Interior Minister Aleksandar Vulin said Tuesday.

Serbia, Russia’s traditional Balkan ally, voted in favor of a U.N. General Assembly resolution condemning the invasion of Ukraine but is the only European nation that has refused to join international sanctions against the Kremlin.

Credit: SES of Ukraine via Storyful

How is Putin handling the flow of news?

The channel condemned the restriction on Tuesday in the name of "millions of people in Russia who relied on us to get impartial news, in a context of heightened disinformation and propaganda."

Euronews is broadcast in 160 countries.

Putin has intensified a crackdown on media outlets and individuals who fail to hew to the Kremlin line on Russia’s war in Ukraine. He has blocked Facebook and Twitter and signed into law a bill that criminalizes the intentional spreading of what Moscow deems to be "fake" reports.